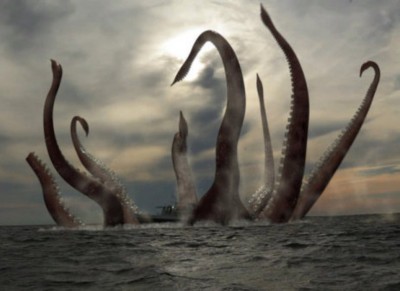 Popularized in the 1981 film Clash of the Titans, the kraken is one of the few monsters possibly based on a real animal. It is not of Greek origin, however, but Scandinavian, nor is it even remotely humanoid in appearance. While the earliest reports describe the kraken as more akin to a crab than an octopus or squid, the kraken is now largely considered to be the cryptozoological cousin of the giant squid, itself once thought to be a mere myth.

The legend of the kraken dates back to a 13th-century Old Icelandic saga called Örvar-Odds, in which a beast called hafgufa is described thusly: “…the hafgufa is the greatest monster occurring in the water. It is its nature that it swallows both men and ships and whales and everything that it can reach. It is submerged both by day and night together, and when it strikes up its head and nose above the surface, then it stays at least until the turn of the tide.” The word kraken itself is Norse and is the definite form of krake, which is used to denote an unhealthy animal or something that is twisted. The monster was said to dwell off the coasts of Greenland and Norway.

Giant squid have been washing up on beaches for centuries; with a little imagination it was not difficult to conjure up images of island-sized monsters that seemed to delight in sinking ships. The largest documented specimen turned up in New Zealand in 1880 and measured an impressive 65 feet. A few eyewitness reports claimed to have seen creatures as large as 80 or 90 feet. Sucker scars found on sperm whales, the giant squid’s mortal enemy, have measured as large as 18 inches in diameter and point to truly massive squid. That is, if one believes Bernard Heuvelmans’ contention that the “diameter of the largest suckers is one hundredth of the length of the body and head.”

Pioneering taxonomist Carolus Linnaeus, in in the first edition of his Systema Naturae (1735), classified the kraken as a cephalopod and used the scientific name Microcosmus marinus. The creature was removed from subsequent editions. Erik Pontoppidan, bishop of Bergen in Norway, spoke of the kraken at length in his Natural History of Norway in the mid-18th century. Pontoppidan claimed the creature was occasionally mistaken for an island, and that the greater threat to sailors was not the kraken itself but the whirlpool left behind when it sank beneath the sea. He acknowledged, however, that “if [the creature’s arms] were to lay hold of the largest man-of-war, they would pull it down to the bottom.” In the 19th century, zoologist Japetus Steenstrup was the first to study the giant squid in detail. He discovered reports of beached giant squid dating as far back as 1639, collected pieces of specimens, and lectured about the topic.

When he published his description of the giant squid in 1857, he gave it the scientific name by which it is still known today: Architeuthis. Steenstup’s work was largely ignored for years, even after the crew of the French gunboat Alecton encountered a giant squid in 1861, and it was not until several years later that the existence of these megafauna was acknowledged. The Alecton‘s crew had already been ridiculed, despite their squid having been a rather modest 24 feet in length.

Proving the existence of giant squid was difficult at best, and a mature giant squid was not even photographed until 2002. Size is the greatest controversy with regard to both the giant squid and the kraken, and which truly separates the legendary sea monster from the real-life giant squid. No one knows how large squid can grow in their native habitat, and will likely never know until a live specimen can be observed. Until then, the kraken will remain best known as a Ray Harryhausen monster and a brand of spiced rum. But that does not mean it isn’t already lurking in the deepest, coldest places on earth. After all, it wasn’t so long ago that no one believed in the giant squid, either. 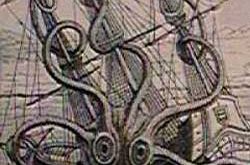