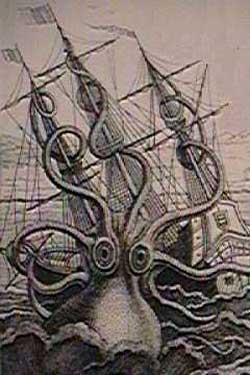 Our quest is nigh complete, our vessel has captured a plentiful array of marine life, destined to become delicacies around the world at prices that will make my men and I rich. Who would think that this vast body of water would contain the key to eternal luxury and freedom from debt…”

As you were writing in your personal journal your boat quaked. You placed your quill back in the ink-bottle and quickly placed your gun holster around your waist. You ascended the staircase from your private quarters and you were greeted by a few pale faces. “What in the blue hell was that,” you question, “Have we hit land?” You glance to the bow and stern of the ship and there is just water as far as the eye can see.

“It seems we’ve hit something, captain”, one of your men answers, his voice shaking. “Hit bloody what?” Suddenly the boat was hit with a monumental force. You all were thrown to the ground and slid down the deck of the ship. The boat was beginning to tip towards the bow, as if you were sinking, but the tipping was caused by an anchoring force. You hang on for dear life and glance down to the bow and see what is causing this catastrophe. What your eyes see your mind cannot fathom. Suction-cupped tentacles at least 2 meters in width were wrapped around the mast, weighing the ship and sinking it into the ocean. You pull your gun from it’s holster and fired at the barnacle encrusted extension of a horrible monster’s body. You see your men screaming, fearful faces cascading down and plunging into the ocean, to which you would surmise would end in a horrible death. Suddenly, you saw it’s face. A cavern for a mouth lined with jagged rows of razor-like death.

Your hand began to slip, you knew this to be the end. You started spiraling into a free-fall towards the nightmarish-creature, which you didn’t believe could exist until now. In mid-air you grabbed your gun from its holster and began to fire. 5 bullets entered the beasts rough hide and suddenly, you landed in its mouth. You weren’t sure if you were dead or living, but you noticed water was entering the squid-like creatures mouth. You noticed a safe exit and swam from its mouth, eluding the rows of teeth. When you looked back at the creature, the water was murky with blood, you smiled to yourself, you had killed it. You breached the surface of the water, gasping for air and screaming triumphantly. Your ship was a wreck and your men were all dead. You raised your first to the air and yelled:

“This is my ocean,” As a tentacle whipped to the surface and grabbed your leg, dragging you down to a watery grave.

Said to dwell off the coasts of Norway and Iceland, the mythological monster known as the Kraken is said to resemble a giant squid or octopus. Krake or Kraken is actually the German word for octopus. Hailing from Anglo-Saxon mythology, this creature was known to destroy entire vessels at a time. It could be as large as a floating island, and often was mistaken as one, as fisherman recount. The monster was known to create intense currents and whirlpools that would suck ships down, and the crew would never be seen again.

The interesting part of this mythology is that it is an example of a “fish story”. There are giant squids that exist in the depths of the sea, becoming as large as 13 meters or 43 feet long. These animal normally stay very deep in the ocean, but are known to reach the surface of the water at times. It is likely and fairly plausible that sailors saw these giant squids and the tale became exaggerated to an incredible extent. Many sailors were lost at sea, but the ocean around Iceland is often known to have dangerous currents and volcanic activity, which could have caused ships to sink.

In drawings, the Kraken is often shown risen from the sea with its tentacles stretched and binding a ship, later to pull it down to the depths of sea. In Jules Verne’s novel “20,000 Leagues Under the Sea”, giant squid attack ships and devour crew members, much like the Kraken would in mythology. The Kraken also appears, and likely got the most exposure ever when Pirates of The Caribbean 2: Dead Man’s Chest was released.

After a bargain with Davy Jones, Jack Sparrow owes 100 years of service on “The Flying Dutchman”. When Jack refuses, Davy Jones sends his pawn, the Kraken after Jack. In 1981, the fantasy film “Clash of the Titans” was released. In this film, oddly enough, the Kraken is depicted completely different than any mythology describes it. When Cassiopeia angers the Goddess Thetis, by comparing Andromeda’s beauty to hers, Thetis demands that Andromeda be sacrificed to the Kraken. When the Kraken is released from its enclosure , it rises from the depths. This version of the monster was a giant biped with four arms, almost resembling an offspring of Godzilla and the Creature from the Black Lagoon. Also, in H.P. Lovecraft’s “Call of Cthulhu”, Cthulhu is described as a God with an Octopus head and lived deep under the sea.

In hard times it seems that fantasy films get a lot more exposure in pop-culture, so I’m guessing we’ll be seeing our friend the Kraken in the not-too-distant future. This can actually be guaranteed, as a remake of “Clash of the Titans” is on the horizon. It remains to be seen how this creature will be shown, but it’s a sure bet it will be on a scale of epic proportions.

It is definitely not safe to say that the Kraken could not exist. Almost 95% of the ocean is unexplored, and that leaves a lot of room for unknown creatures. Especially at incredible depths, in the darkness, the Kraken may very well be waiting for an opportune time to make itself known. 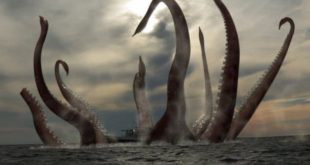