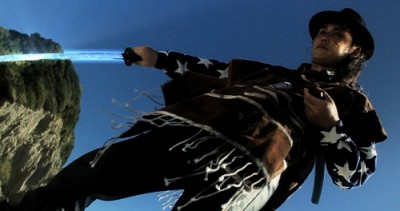 “Since first appearing on the scene as one of the key creative team members behind the cult hit Versus, Yudai Yamaguchi has been one of the great, largely overlooked talents of the Japanese film scene,” says Fantastic Fest programmer and Twitchfilm founder Todd Brown. “Enormously playful and unpredictably inventive, Yamaguchi brings his unique creative energy to everything he touches. And unique is certainly the word for TEBANA SANKICHI: SNOT ROCKETS. It’s a ridiculous explosion of absurd humor that proves that there is always room to push a joke farther.”

The film features Japanese action superstar Tak Sakaguchi reprising a role he originally performed in Snot Rockets and Super Detective, a 1995 independent short film written and directed by Yamaguchi. Now, seventeen years later, Tak and Yudai have joined forces again to reboot a new, feature-length version of the short, even more lunatic and unpredictable than the original.

Tak stars as Tebana Sankichi—lover of women, rescuer of the fallen, sometime private detective, wayward son, homeless bum, celebrity, bullied child, spoiled rich kid, and fighting master. In what can politely be described as a “loose episodic comedy,” we follow Sankichi’s increasingly bizarre adventures across space and time, and his long-suffering partnership with “Twice” Shiro, his bespectacled, put-upon partner, as well as the efforts of a hard-working postman trying to deliver a very important letter to him.

Shot across the globe in Tokyo, Yubari, Philadelphia, New York, and Austin, TEBANA SANKICHI: SNOT ROCKETS is now bigger, longer, and packs more power per inch than ever before. Careening recklessly from suicide humor and Tora-san parodies to traditional New Year’s Day television greetings, horror homage, and yakuza movie references, it’s a film guaranteed to wear the audience out with its relentless pace and make them cry mercy! A radical departure from anything the filmmakers have done in recent years – and produced on a shoestring budget – TEBANA SANKICHI: SNOT ROCKETS is a demonstration of how much Yudai and Tak continue to push the boundaries of the action / comedy film, and is their latest shot across the bow of good taste and proper judgment.

Director Yudai Yamaguchi is Japan’s top specialist in the field of deranged and bizarre cult comedy films. After graduating from film school, Yamaguchi turned out a number of award-winning short films, some of them with Tak Sakaguchi. They were spotted not long after by filmmaker Ryuhei Kitamura, who hired Yamaguchi and Tak to work on his film, Versus, with Tak starring and doing the action while Yamaguchi wrote the screenplay and directed the second unit. Soon after, Yamaguchi made his own directorial debut with the zombie baseball flick, Battlefield Baseball, which starred Tak and became a surprise word-of-mouth hit in Japan after winning the Grand Prize at the Yubari International Fantastic Film Festival. Yamaguchi followed that up with Meatball Machine and the live-action adaptation of the manga series, Cromartie High School. A few years later he was back with the 80’s horror tribute Tamami: The Baby’s Curse and then directed several of the fake in-movie commercials for Tokyo Gore Police. More recently, Yamaguchi co-directed the genre TV series Soil with Takashi Shimizu, director of The Grudge, and joined the upstart genre film label Sushi Typhoon with Yakuza Weapon (co-directed with Tak) and his Battlefield Baseball follow-up, Deadball, again starring Sakaguchi. He also contributed an episode to the international horror omnibus The ABCs of Death, produced by Magnet Releasing, which will receive its U.S. Premiere at Fantastic Fest.

Director Yudai Yamaguchi will attend Fantastic Fest’s World Premiere of TEBANA SANKICHI: SNOT ROCKETS, as well as the U.S. Premiere of THE ABCs of DEATH, and is available for email and in-person interviews with select press outlets. To request interviews with Yamaguchi, please contact Ted Geoghegan at TedGeoghegan@gmail.com. For sales and film festival booking information, please contact Marc Walkow at MarcWalkow@gmail.com.

ABOUT WORSAL
Studio Worsal has been in the business of providing action to Japan and the world since 2003, bringing together the best stuntmen and action performers along with constantly debuting promising new directors and action coordinators. Worsal has its own first-rate facilities to help produce everything from action movies, TV commercials and even shows for Japan’s famous Muscle Theater. As one of only three teams in Japan certified to execute vehicular stunts, we are proud to have been featured in cult film label Sushi Typhoon’s Alien vs. Ninja among many other productions. Like its the unique accomplishment of a Guinness Book World Record for “Most People Doing a Back Handspring,” Worsal isn’t limiting itself to films, but aspiring to provide motion capture for games and continuing to expand into new territories for action and excitement!

ABOUT FANTASTIC FEST
Fantastic Fest is the largest genre film festival in the U.S., specializing in horror, fantasy, sci-fi, action and just plain fantastic movies from all around the world. In years past the festival has been home to world premieres of There Will Be Blood, Apocalypto, Zombieland, The Human Centipede 2 and Red while the guest roster has included such talent as Mel Gibson, Bill Murray, Edward Norton, Ryan Reynolds, Karl Urban, Josh Hartnett, The RZA, Dolph Lundgren, Jemaine Clement, Paul Rudd, Bill Pullman, Paul Thomas Anderson, Kevin Smith, Jon Favreau, George Romero, Darren Aronofsky and Mike Judge. Fantastic Fest also features world, national and regional premieres of new, up-and-coming genre films. The festival has launched and propelled the buzz for international genre hits like The Human Centipede, Monsters, Timecrimes and Trollhunter. Fantastic Fest is held each year at the Alamo Drafthouse Cinema on South Lamar in Austin, Texas. During his Keynote Address at the International Film Festival Summit, Variety president and publisher Charlie Koones listed Fantastic Fest in a list of “10 Film Festivals We Love,” alongside industry heavy-hitters such as Cannes, Toronto and Telluride. Fantastic Fest was also named as one of the “25 coolest film festivals” and the “25 film festivals worth the entry fee” by Moviemaker Magazine.