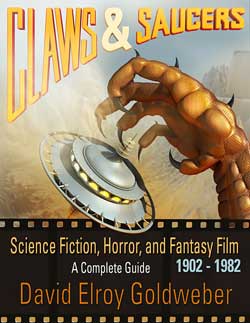 You have to admire a book that arrives so heavy and so big that you know it’s “not” one to read standing. The title? “Claws and Saucers” written by David Elroy Goldweber. The content bears the subtitle of “Science, Horror, and Fantasy films – A complete guide 1902 -1982”. Now upon receiving this my first question was immediately answered, which would be…. why stop at 1982? It was perfectly clear that another volume is most likely in the works (and maybe even a 3rd). The book would have been too overwhelming trying to fit additional years past what it has already presented (not to mention damn heavy). It would have also been close in size to one of those 12″ thick Dictionaries that are usually seated on pedestals at libraries. So for now, I say be thankful for the gift that Goldweber has given you.

Reviewing a “review book” is actually an easy task, since the collective is meant for readers to wade thru sections rather than front to back read. It is also simply a reference book to peruse film titles in alphabetical order. This aspect is mentioned in the intro. No separate genres, types, years or other to confuse you back and forth, just a simple flow from A-Z. The book is all textual eliminating pictures, however the oversized pages feel “just right” as the content would have been too hard to read if shrunk down into a 5×7 smaller edition (or such).

Each entry is a quick overview from each film with some helpful included details. The entries include: a description, year notes, what each is famous for and a quick rating system to accompany features such as nudity and gore. As the author states each is a quick description of the films, not so much a review, summary, or critical analysis.

Since I run a web site that reviews films, I fully know that trying to add these factors in would make for much longer entries. Though the entries are fine for their purpose and most likely all that matters. What I envision this book to be for others is “that big reference book” on the shelf that they can quickly search for film briefs. Once this expands into a collection, then perhaps an impressive encyclopedia group as well.

The book’s reference to “complete” is actually subjective in this case (and it is also stated in the intro). As measuring our own list of just 80’s films, we count them in to be about 863 titlesa alone. Sure those obscure movies like “Endangered Species (1982)” and “Honeymoon Horror (1982)” were missing (just as an example), not to mention a large collective of Asian horror and exploit films (also mentioned). However I know better than anyone, the titles that were missing usually mean that 95% of the population will never see then, buy them or acquire them. So while they exist, they don’t from a consumer level.

Regardless of this observation, it’s not meant to take away from the accomplishment that lays before you. Folks there is alot films in here, more that you’ll ever see of even read about. For most of us, this edition is just fine leaving the IMDB for the more obscure titles. The book also mentions listing every title that is also listed in wikipedia….but I can verify myself, that wikipedia..while mammoth is also largely incomplete when it comes to horror titles. Why? because many are just too damn hard to find. The revelation of youTune has enabled “some” titles to resurge from collectors who transferred their analogs to digital, but beyond that….. good luck.

In closing Goldweber is a true horror fan who claims to have watched every film he lists. This entails SO much viewing time that you can’t really phantom the extent of it. His descriptions are insightful and his style if spot on. If the film sucks, he’ll call it out right away…if it’s too racy or rape-driven he’ll also state the obvious.

To end with “pick one up” is probably not sufficient enough to leave my readers. Better put is: “buy one today”, “another great read has arrived”.. I’m sure as this book is finding its way onto shelves, that David is already busy writing his next edition. Till then we’ll be just fine trying to catch up to the films listed here.!!!