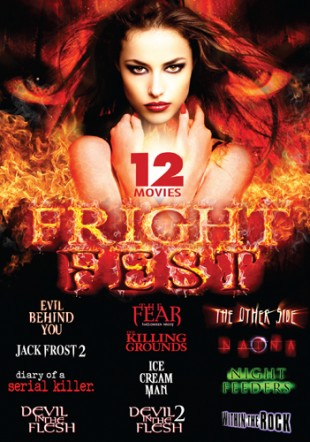 You can always tell when Halloween is brooding up around the corner as all the fright packs begin to emerge. Mill Creek Entertainment is one of the better movie release collection houses always finding newer ways to package “alot of frights” for a small price. This collection which features newer releases from the late 90’s to 2000’s has some great titles that stand alone on their own.

Over 17 hours of Horror and Nightmare makes for a great warm-up sit down into the season. That’s 12 films in all starring great talents like: Rose McGowan, Jodi Lyn O’Keefe, Christopher Allport, Eileen Seeley, Chip Heller and Clint Howard.

Where do ya start? I’d shoot for the “The Fear”, “Devil in the Flesh” and “The Other side” for starters

For more details on each, see the quick synopsis below:

Devil in the Flesh
Starring Rose McGowan, Alex McArthur, Peg Shirley
1998 Color R
She’s young, beautiful, sexy and dangerous. Debbie Strand (Rose McGowan) is the new girl in class that everybody notices. At the moment she arrives, Debbie sets her sights on her teacher, Peter (Alex McArthur), the high school heartthrob. But her seductive advances don’t win Peter until she threatens him with blackmail. What Debbie wants, Debbie gets, no matter what’s standing in her way. As a checkered past of unsolved murders catches up with her, Debbie’s games threaten to turn deadly again.

Devil in the Flesh 2
Starring Jodi Lyn O’Keefe, Jsu Garcia, Katherine Kendall
2000 Color R
After escaping from a mental institution, Debbie Strong steals the car, money and identity of a college co-ed and heads off to college where she becomes obsessed with Sam, a handsome writing teacher. When her roommate discovers Debbie’s true identity and horrifying past, her wicked web of deception is threatened, sending murder and seduction to higher and more terrifying levels than ever before.

Diary of a Serial Killer
Starring Bruce Robert Cole, Jessica Aldridge, Andreas
2008 Color R
On a rainy night, in a dark alley, award-winning journalist Nelson Keece witnesses a vicious murder. Although horrified, his curiosity takes over when this cold-blooded killer forces Nelson to interview him. Now, the tension mounts as fast as the body count rises while the killer stalks the streets. This film’s disturbing portrayal of the killer, the cop and the writer is shocking and not to be forgotten.

Evil Behind You
Starring Hillary Kennedy, Manuel Velazquez, D.C. Lee
2006 Color PG-13
Lisa Williams (Hilary Kennedy) and Debra Reynolds (Gwendolynn Murphy) were both enjoying evenings out when something went very wrong. Neither girl can recall what has happened as they awake locked in a dark observation room. Debra’s husband, Tony, (D.C. Lee) and Lisa’s boyfriend David (Manuel Velazquez) are both handcuffed to operating tables and there is no explanation. No one will respond to their calls for help and there is no way out of the room. The abducted couples are unwilling victims of a scientific experiment.

The Fear 2
Starring Gordon Currie, Stacy Grant, Philip Rhys
1999 Color R
On Halloween weekend Mike Hawthorn has invited his girlfriend, Peg, and some other friends to stay at his family’s country retreat where they intend to party till dawn dressed in costumes that represent each individual’s deepest, darkest fears. The Halloween party is set to be great fun, until Mike reacquaints himself with an old family friend, an American Indian named Crow. Crow has other plans for Mike, namely to prepare him for an ancient ceremony using an antique wooden mannequin nicknamed Morty.

Ice Cream Man
Starring Clint Howard, Justin Isfeld, Anndi McAfee
1995 Color R
The happy jingle of the neighborhood ice cream truck turns into hell’s bells as Gregory Tudor (Clint Howard) delivers torture, murder and mayhem with every scoop of rocky road. After witnessing the murder of his friend “The Ice Cream King”, Gregory grows up to become a demented ice cream man with mysterious frozen treats. No one is safe from the ice cream man in this pulse-pounding nightmare that’s sure to leave you chilled to the bone.

Jack Frost 2
Starring Christopher Allport, Eileen Seeley, Chip Heller
2000 Color R
Jack, the chiller killer is back and he’s mad as hell. An accidental lab experiment resurrected the evil snowman, but this time, the crystal killer can’t be stopped by fire, bullets or even his worst enemy, chemical anti-freeze. With revenge on his mind, Jack sets out to finish off his nemesis, Sheriff Sam, who is vacationing on a Caribbean island. Sam’s balmy paradise turns into a Winter Terrorland when Jack freezes the island and quickly ices everyone around him. No one can stop the chilling killing spree when Jack can travel as lethal liquid or fatal, frosty flakes. Just when you thawed it was safe to go back in the fridge…

Killing Grounds
Starring Priscilla Barnes, Courtney Gains, Cynthia Geary
1998 Color R
After the fatal crash of a small airplane in the high Sierras, six greedy strangers clash over a fortune in stolen gold. When four hikers stumble on the treasure and begin hauling it away, two drug dealing thugs come to claim the loot, regardless of who gets hurt. The torturous trip down the mountainside becomes a frightening ordeal as each has his own plans for the gold. No one hears their bloodcurdling cries as they cross the killing grounds at the bottom of the mountain.

Naina
Starring Urmila Matondar, Anuj Sawhney, Malavikka
2005 Color Not Rated
On a day of solar eclipse five year old Naina loses her eyesight and her parents in a road accident in London. Twenty years later she is bestowed with the gift of sight thanks to the marvels of modern science. Her period of darkness is over; or is it? A horrifying period of darkness begins. What is this curse that has been upon her? Will she ever be able to escape it? Will this extraordinary sense she is now bestowed with destroy her life? Will she ever be able to resume her regular life again? “Naina” is the Quest of a young woman trying to find answers to these supernatural mysteries. Will she succeed?

Night Feeders
Starring Donnie Evans, Brett Gentile, Mike Monzitta
2006 Color R
In the remote Southern wilderness a fiery meteor crashes to Earth and forever changes Mankind’s view of the Universe. For this “meteor” unleashes an infestation of nocturnal alien creatures with just one intention: To devour every warm-blooded life form on our planet. When night falls four hapless deer hunters in search of some weekend fun and sport are about to discover how it feels to be the prey!

The Other Side
Starring Nathan Mobley, Jaimie Alexander, Cory Rouse
2006 Color R
On the night Sam North (Nathan Mobley) plans to reunite with the girl he loves (Jaimie Alexander), he’s mysteriously murdered and sent to the horrific realm of the damned. With the help of two other denizens of “The Pit” he somehow escapes back into the world of the living. But now there’s Hell to pay. Three invincible bounty hunters called “Reapers” are determined to drag him back to the Netherworld where he’ll writhe in torment… forever!

Within the Rock
Starring Xander Berkeley, Caroline Barclay, Bradford Tatum
1996 Color R
The ultimate predator…unleashed! The countdown to the end of the world has begun. As a runaway moon hurtles through space on a collision course with Earth, only a small team of interplanetary miners stands in its way. Their mission to alter the moon’s course is halted when a fossilized alien is unleashed from its subterranean hibernation. The indestructible creature now stands between them and their determination to save humankind from certain extinction.