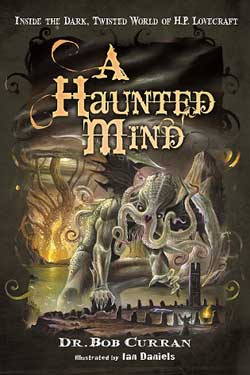 When I heard that master writer Bob Curran would devote an entire edition to the subject of author H. P. Lovecraft, I can tell you I was pretty excited. The book would take on the mythos and history of a legendary horror writer who was known for his reclusive and enigmatic nature. I had long been an admirer of Lovecraft’s work, though like many I’m sure, found his writing to be a bit too deep to comprehend at times. Finally, some one had taken the time to lay out the HP Lovecraft foundation complete with dark imaginative illusions of forbidden worlds, nightmarish creatures, and the tomes of a brilliant mind who saw things in within the worlds beyond our own. “The Haunted Mind” is a fantastic look into the man, the myth, and his work.

You’ve seen the films, you’ve read the books or maybe you just know him by name. In any case, The legend of Howard Phillips Lovecraft is one that needs to be told. If not for background purpose alone, for clarification on H.P’s perspectives and fictional characters within an ultra horrific world. Lovecraft has frightened generations, all the while inspiring countless others with his unique approach to honorific things.

This was the basis of my attraction to the man’s work. Having had a harder time sinking into to some of his novels over the years, I found that it was a little easier by attacking a few inspired films first and then referring to the literature. A book like this made it even easier.

Like the figure of Aleister Crowley (another dark enigmatic), I had a certain respect and interest for this literary giant of the horror world. This book per its title of “A Haunted Mind: Inside the Dark, Twisted World of H.P. Lovecraft” is certainly just the kind of material I had been waiting for.

Bob Curran is one such author who takes the time to really “do” the hard work for us. It was clear as I read thru the book that I would have never had taken the time to track down all the lore, text, legends, cultural connections, and “tales of old” to put the pieces of this man’s work together. For who are these “Old Ones” and Gods of other worlds? How do they relate to other fictional characters within literature and is there any connection? What is the fascination with aquatic deities and monsters from far beneath? Do the locations exist, of are they figments created from the locations that H.P. Lovecraft was subject to in his day to day

Curran explains each of the important HP mythos and the world of Cthulhu by painting us a picture of where each of these creatures or locations “may” have been inspired from. Though ultimately it was the material of HP and his imaginative nature that really made a name for this man. Was he privy to arcane books and tomes of magic that have long been forgotten? Was H.P. Lovecraft a practitioner of the arts leading way for dark realizations from beyond?

However like many masters of old, HP was a poor recluse (who sponged of others to fuel his creations). Abstract thoughts are assumed to be stemmed from Lovecraft’s disdain for society and his inability to properly assimilate to the social aspects of life. The man who seemed large than life, is presented with the humble beginnings of a struggling writer who did all he could to keep his dignity in tact against a world that required him to conform to their standards. Even with the occasional writing gig, H. P. Lovecraft was proud man who put his work above all others. A master letter writer himself, it would appear that H. P. Lovecraft might fit quite well within our current culture of online obsessions and the art of engaging purely over a an electronic medium. The book introduces us to his life, his marriage and the relatives that played a big part in his upbringing.

Most of all we explore the heralded theme of deities and entities such as: “Nyarlathotep”, “Yog-Sothoth”, “Azathoth” and “Abdul Alhazred”. We dig into the infamous Necronomicon and the idea of forbidden knowledge. His was a world of powerful and malevolent beings that followed their own set of rules…ones of dark tonality and abstract settings.

Great illustrative work is provided by Ian Daniels who brings to life some of the H.P. concepts. Join Curran in this ultimate study of the man, his work, and his macabre tales. A well researched book that not only educates on HP, but on many of his themes and ideas. There is alot here that opens the doors to other studies. I highly suggest this as a take on this most peculiar author.