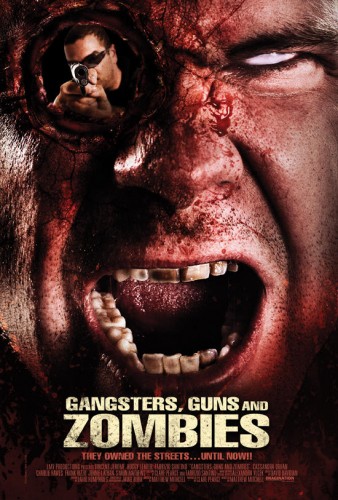 The whole “zombie thing” has been hyped up so much that everyone thinks it’s the end of the world! Of course, where one man sees the dead rising from the grave, another sees opportunity. Q had a plan: drive the robbery getaway van, deliver everyone to the safe house and get paid – a nice, simple, plan. Unfortunately, life is never really that simple, and to top it all off, this is the first time Q has been a getaway driver.

“Gangsters, Guns, and Zombies” is a likable film. It doesn’t really offer up anything new in the genre but the overall presentation is highly polished and this cast elevates the film to being well worth the time. It’s a little bit “Reservoir Dogs” and “Lock, Stock, Two Smoking Barrels” with a healthy dose of “Dawn of the Dead” thrown in for good measure. You won’t be blown away by the film but I had a good time watching it. When doing a low budget film like this it always helps to have a cast that can take your material and run with it. EVERYONE in this film ran with it and the end result is an incredibly fun ride through a zombie infested world where everyone is out to make a few bucks.

Q (Vincent Jerome) is in charge of driving the getaway van. They have a bag full of cash, they have their pal Danny (Simon Matthews) bleeding out in the back, Crazy Steve (Fabrizio Santino), Muscles (Charlie Rawes), and Pat (Frank Rizzo) are back there with him trying to keep him coherent and alive. The mastermind of this whole operation is Tony (Huggy Leaver), who is just a flat out mean bastard. The job was supposed to be simple, get the cash and get to the safe house. Things rarely ever work out as planned and this is no exception. Since the first house was compromised, there is a second secret safe house that is their only other option. While the army of the dead seems to be growing larger, the fuel in their gas tank just keeps getting lower. It seems that that the life of a criminal is still pretty rough, even during a zombie apocalypse.

I know I always gripe about CGI blood and gore. 99.9% of the time I don’t like it and in “GGZ” I still don’t like it. The exception though is the fact that this film was done on a tiny budget. The majority of the time CGI is used just as a time saver and not out of necessity. I have a feeling that it was used in this film as a necessity. Making your first feature film is incredibly difficult. Not everyone succeeds. The ones who do succeed do so because they use whatever resources they have available to them to save time and money (that most don’t have). So while I didn’t like most the CGI, I did understand and except it. At the same time, there were an equal amount of practical effects that looked terrific. So there is a little bit for everyone.

What I really appreciated was the group dynamic between the central core group of characters. They all initially come off as a bunch of assholes but as the events play out, you begin to see who the real ass is and who the heroes are. The cast is just terrific, everyone deserves to move on to other things and Vincent Jerome has a really likable charisma that just screams leading man material. A shout out must also go to Cassandra Orhan and Jennie Lathan (who has all the best lines in the film). 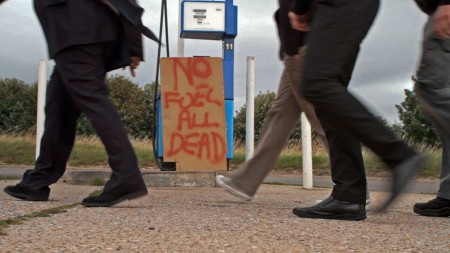 This isn’t a scary filml, it’s a comedy without question. There are some good sight gags and running jokes. Most of them involving Muscles whose character is just full of surprises. There are a few slow moving moments near the first part of the film and I personally would have preferred more gore. “Gangsters, Guns, and Zombies” delivers on its’ title as well as providing the audience with a great escape from reality. Director and co-writer (along with Taliesyn Mitchell) Matt Mitchell has a strong debut film, just hopefully someone else can see what I do and give this bloke some cash so we can see what he will do with a much larger budget. Fingers crossed. ***1/2 (out of 5) 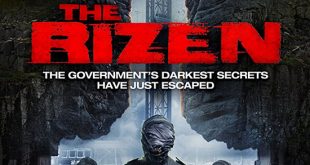