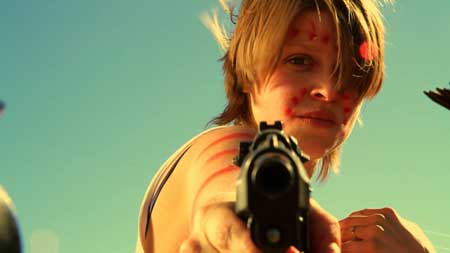 Roberts couldn’t be happier about the upcoming release. “Dust Up is truly a one-of-a-kind film… fun, funny, scary, sweet, twisted, intense and gross all at the same time. We needed to find a distributor who understood that and could deliver us in the biggest possible way to the ravenous audience who hungers for movies like Dust Up. We are thrilled to be partnered with just such a company in Breaking Glass.”

A one-eyed vigilante with a dark past has vowed to change his ways, trading his machine gun for a yoga mat. But when he encounters a beautiful young mother (Benson) in deep trouble with a cannibalistic drug lord and his evil goons, he realizes that justice must be served. Teamed up with his smooth-talking Native American hipster sidekick, our hero rides into the badass brawl of the century. 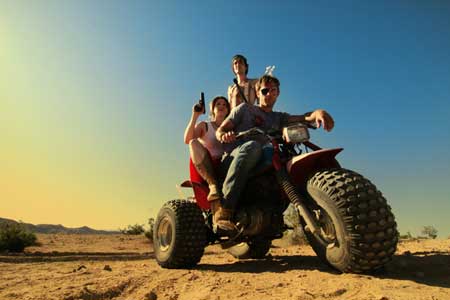 The DVD will hit shelves in November, loaded with special features including an audio commentary with Benson and Roberts, Find the Pony, a behind the scenes featurette; various interviews with cast and crew, The Herm Dawg Diaries featurette shot by Betz, and the Dust Up Comedy PSA.