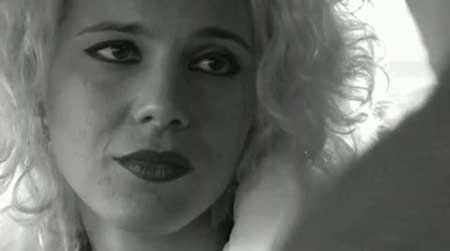 In the 2nd part to our “The Bunny Game” interview, we present the lovely and talented Rodleen Getsic who’s been kind enough to give us some insight into the film and its process. You can also catch “The Bunny Game” review here.

“The Bunny Game” is credited as your first film role. I’m curious as to how you were picked, on what basis, and why you chose such a racy provocative role as a debut into film?

THE BUNNY GAME came into us. We did not choose roles. It was revealed to us as we went along. Adam Rehmeier and I decided at one point many years ago to make a horror film together. For a while, we knew nothing of the film other than it would be a most f*cking gnarliest scare. The idea was incepted between us at a convergence of memories, ideas, and innate feelings. Over time, Adam and I worked together on several test shots, still and moving imagery. We cultivated the power of the film for several years, until it finally became apparent it was time to begin. All of it came together like a perfect puzzle getting solved. We just walked the walk. We followed it. It is spiritual to us. Art is an expression of the soul, and we allowed THE BUNNY GAME to take form in this way. It became its own monster.

My goal was to express everything I’ve got into this film, which is what I do with all of my art, every day of my life.

The film is not intended to be racy. I dont think the film is provocative at all. Though it does show WOMAN being f*cked by MAN.

Check out our additional interview with director Adam Rehmeier

You are credited as a writer in the movie, what was your collaboration process and how much of the extreme portions did you write?

I am a writer. However, this film was never written. THE BUNNY GAME is entirely an improvisation. Adam and I prepared by brainstorming bullet points. Basically, games that the antagonist would play on the victim. The collaboration process between Adam and I is raw and spiritual. We dont even talk about it really. It just happens. 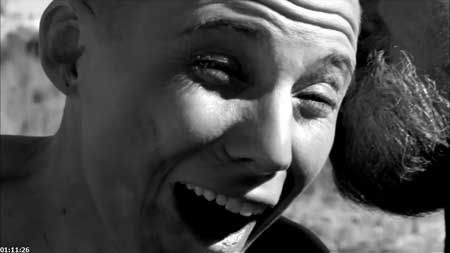 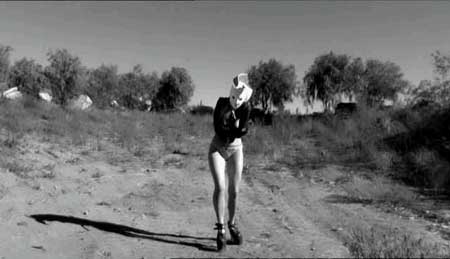 Can you comment on where you got your ideas from, or if it was based on real encounters? 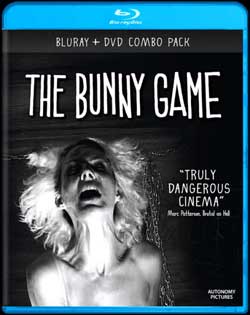 Real encounters with evil is indeed what this film is based on.

When I was young, I experienced the world fully – communicating with what some call God, questioning everything, discovering my soul in the calm of my own mind, exploring, taking chances, traveling alone, meeting new people. Life is a gorgeous whirlwind of yin and yang, dark and light. God is everywhere. To stay centered and out of shadow is key. Like at High Noon, where there is no shade. It takes a clear mind and wisdom to navigate in this world without getting caught in the abyss of darkness. Going through difficulties has taught me how to live right, how to survive. This film has that kind of power, to purify, so others don’t have to delve into danger.

In my explorations as a youth, I was shown a vast array of reality. Conglomerates of wonderful and terrible. During these journeys, I did encounter some bad people. Some tried to hurt me, and there were times when they succeeded, but I would live out the instinctual fight or flight method that comes with fear (which includes “play dead”), and I eventually always got away. Im alive today. I could write a whole book on my dances with the friends of the devil. It is amazing and disgusting how many men out there think it is their right to take advantage of a girl. Even with their eyes. I was never a prostitute, nor a drug addict. But in real life, I have met up with murderers, rapists, and assholes of all kinds. Ive been caught and forced to do things. I have escaped in nicks of time. One night hunted in the woods till dawn. One night ruffied at a show, and stolen for daze. Sometimes I was lucky enough to be so innocent as to not realize what was happening. Lots of these guys have no remorse, no conscience. Wake the f*ck up. Avoid this. There are tons of rad ones out there who are awakening. Just stop the madness, and find what’s good. There is plenty of Light to go around.

THE BUNNY GAME is an expression of disaster, a consequence of the What ifs, and a f*ck-you to the evil man. This film let me take it all the way… and even further. There is a freedom in this piece of art, energetically, succeeding to win. A misconception in our society today is that men should be in charge. I am in charge. 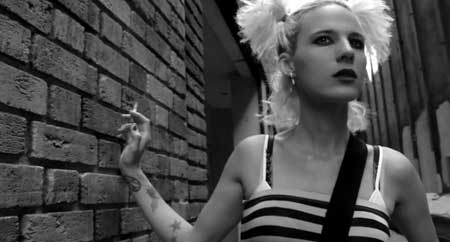 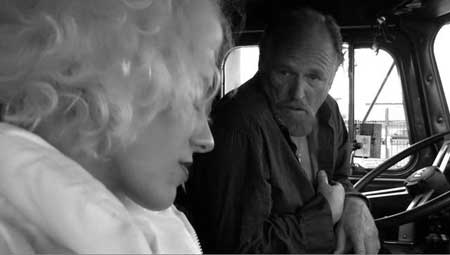 Your role in “The Bunny Game” is pretty abusive, how much of what transpired on screen did you know about beforehand, or was it mostly ad-libbed? Did you do any pre-preparation with actor Jeff F. Renfro?

Oh, I knew it was going to be abusive. I can fight, like in brawl, karate, self defense, moshpit. I have always been a real tough girl. Im strong. Long distance runner. High capacity for pain. Tattooed, branded already. So I knew the film was going to incorporate and feature that aspect of me. Hard core. Elegant. Im a Catch 22.

THE BUNNY GAME was performed like an extreme sport. I used to work for X Games, and Ive seen the gnarly feats of those athletes. Similarly, I decided to push it all the way past the limit with thisone. Big bang. Anything goes. It was not planned. We just lived it. 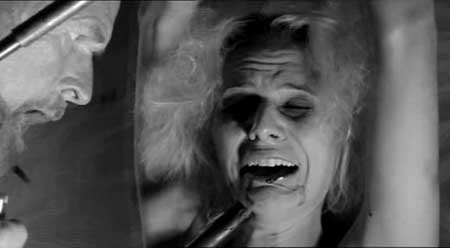 I caught word that the original actor to play “Hog” had backed out. I would assume he knew much of what was going to transpire beforehand, so I’m curious as to why he didn’t move forward with the role? At the time what was his fear of transpiring during the shoot?

HOG is just the guy in THE BUNNY GAME.

Originally, several years prior to THE BUNNY GAME, Adam brought actor Gregg Gilmore to my home in La Conchita, California with an inspiration to make a horror film. It was really going to be a whole nother film… a different monster entirely, to take place on the spooky remains of the Manson Family’s first settlement, above Tujunga. We were going to camp out, and use the Easter full moon’s light. There was an old cowboy cemetery, a prison for boys with sounding bells and yells, and rolling deserted hills. The film (like any art Adam and I create) was to be an experience inmotion, just like music happens, moments unfolding to make history, we use the energy of everything involved to create the piece. 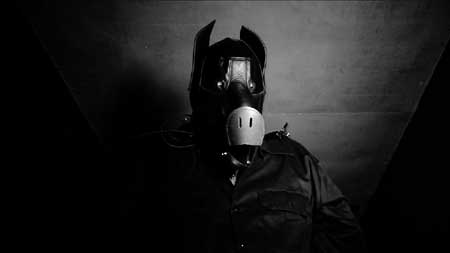 But Gilmore backed out about two weeks before we scheduled to begin the shoot, claiming he could not work with me. Gilmore was afraid he was going to really kill me.

A few of the scenes in “The Bunny Game” would easily fall into the category of p*rnographic. What was your reactions to these, or did you write them in yourself?

My reactions are quite clear and on screen. Each JOHN in the film created his own way of expression. They were allowed to do it how they wanted to do it. 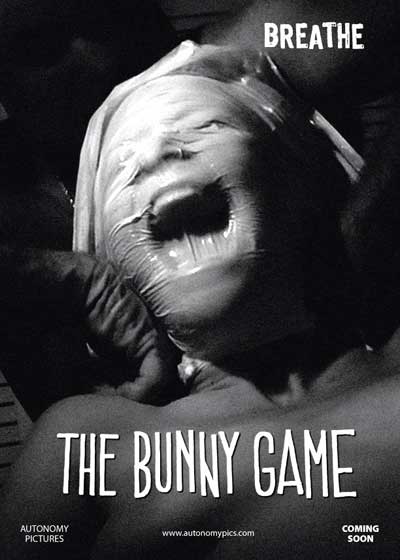 Were you injured during the shoot? I believe in the making of it, it was mentioned that every scene except for the drug use was real. Did this also apply to the branding scenes, or was that special FX?

My biggest injury was shards of metal stuck in my skin, all over my body, and on the bottoms of my feet, from being barefoot and naked out in that junkyard. The caduceus symbol is branded into my back, a forever reminder and proof that I played THE BUNNY GAME.

Thank You from HorrorNews.net! 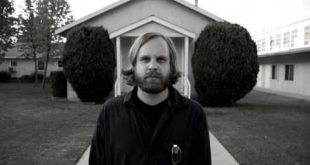 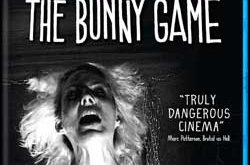 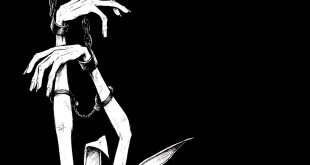 Podcast: Evolution of The Apocalypse – Eps 39