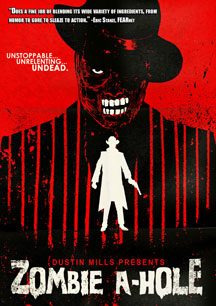 The creators of The Puppet Monster Massacre bring you a grindhouse spectacular filled with blood, boobs, special fx, and southern rock. This is the story of a religious cowboy, a lost soul, and a beautiful one-eyed grease monkey fixing to exact bloody vengeance on the same undead S.O.B. He’s a low-down, dirty, disgusting, depraved, sadistic, psychotic, hell-bent, grade F, Zombie A-Hole who preys on naked twin girls. He ain’t gonna know what hit him!

Zombie A-Hole takes place in a world that’s a bit different from our own. A realm that teeters on the edge of sleaze and comic book stylized awesomeness. It’s Planet Terror meets Sin City meets The Good, the Bad & the Ugly. All the men are hard-asses, and all the women are bombshells. Just because vengeance is your way of life doesn’t mean you can’t look damn sexy while you dole out hearty doses of whoop-ass.

This is a an exploitation flick with a southern gothic flair.

“I think my favorite micro-budget DIY movie I saw last year was The Puppet Monster Massacre, a work of lunacy and brilliance from director Dustin Mills, featuring an all-puppet cast. Mills has a sequel in the works, which I’m excited about – but before that production hits the sewing machine, Mills will unleash a bizarre exploitation / horror / action / comedy called Zombie A-Hole. Mr. Mills generously gave me a sneak-peek of this upcoming shocker a month or so ago – and again I was impressed with what lunacy this director is able to conjure from the tiniest of budgets. This film, about voodoo, vengeance, twins, and the frantic hunt for a particularly menacing zombie, mixes live action, computer animation, and a gritty but stylized grindhouse tone. Zombie A-Hole does a fine job of blending its wide variety of ingredients, from humor to gore to sleaze to action. I’m sure many will love and many will hate this film for throwing all the rules out the window and just being its own delirious, rabid animal, but in my opinion, straying from the beaten path is a very positive thing. Dustin Mills seems to be making a habit of doing so, and I commend him for it.”
– Eric Stanze (FEARnet, Director of Scrapbook and Ratline)