Home | ‘Empress Vampire’ Sinks her Sexy Fangs Into You

‘Empress Vampire’ Sinks her Sexy Fangs Into You 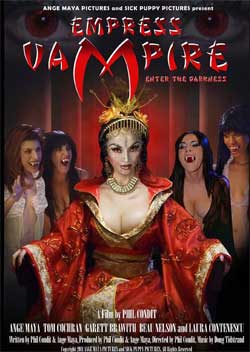 Luscious, exotic, and beautiful Ange Maya ( Blood Scarab) delivers a breakout, tour de force performance as Aleta, the Empress Vampire. Aleta’s story begins when her voluptuous, breast-baring vampire brood returns from a hunt with the gift of an innocent virgin (Megan Cordero, American Nudist) to satiate the Empress’ voracious lust for sex, blood, and flesh. While the Empress and her body-painted vampire spawn dance in celebration of the gift, her topless hand maidens bathe the virgin, preparing the girl to be offered, naked, for an orgiastic gauntlet of sex, mutilation, and death.

Political intrigue is added to the backdrop when cunning Secretary of Defense Arthur Hayes (Tom Cochran, Escape! From Robot Island) plots to recruit Aleta as a super assassin to take out enemies of the state. He dispatches FBI Agent Dan Higgins (Beau Nelson, Zombie Drugs) to find the Empress and make contact. When Agent Higgins discovers vampire hunter Ivor Helsing (Garrett Brawith, The Legend of Bloody Jack, Dexter) and psychic medium Ariana (Romanian actress Laura Contenescue, Caravaggio and My Mother the Pope) are also tracking Aleta, He recruits the pair to assist him.

As Agent Higgins, Ivor, and Ariana pursue the Empress, events take a perilous turn when they realize that they are no longer the hunters, but the hunted.

Empress Vampire is a strikingly different experience with flashback scenes to ancient China to witness the creation of vampirism (in Mandarin with English subtitles) and to the Transylvanian border with Romania in the 1800s, where the modern vampire mythology was born. Added to the mix is a song and dance number by talented composer, Doug Tidstrand (Long-Distance Princess ) between vampires and Secret Service Agents and the Empress and the Secretary of Defense, creating an incredibly rich tapestry to lavish the senses. 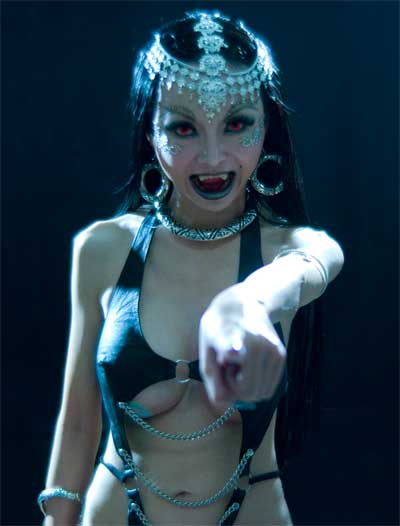 Filmmaker Phil Condit has poured his lifelong love of horror films into Empress Vampire, one of the sexiest and scariest female vampire movie ever made, to make sure you have one wild, roller coaster of a ride and a rip-roaring, horror film-viewing experience.