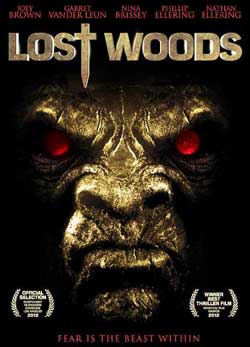 A group of twenty something friends go on an impromptu camping trip to reprise old nostalgia. The clique soon realizes their glory days are far over as an unknown presence lurks nearby. Will the friends pull it together, mending their torn past or will evil prevail rendering them forever in lost woods?

I actually sat on Lost Woods for almost three weeks. Desperately my mind clambered to find something, anything I liked about it. It was an endeavor I wanted to like. It had all the variables and elements of an excellent creature flick that is rarely touched upon. As much as I can respect how great of an idea it must have looked on paper or how much blood, sweat and tears must have been invested into the project, I just couldn’t do it. There’s really little to nothing that can be salvaged from this 88 minutes of abomination. 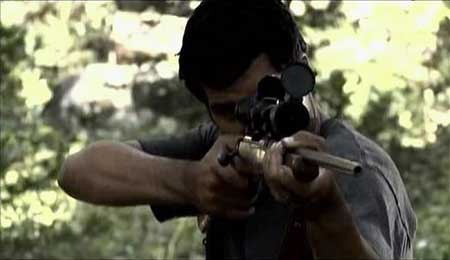 Actually one thing I did enjoy was the original score. Still it was laughable by most of today’s standards at least the music was original even though it sounded like it’d just been exhumed from an eighties time capsule a la Kingdom Come or Bullet Boys revival. It was enjoyable in a hair teased, spandex and bandana guilty pleasure kind of way.

Aside from that, the goofiness is endearing yet gets old, really, really fast. The acting was an embarrassment and difficult to watch. The character of George (Nathan Ellering) is comical at first decked out in his rock t-shirts and mullet wig yet his antics just get annoying and beyond belief. We find it difficult to feel any empathy or sense of connection with any of the characters therefore rendering the plot continuity as a flop and we could really care less what happens to who. 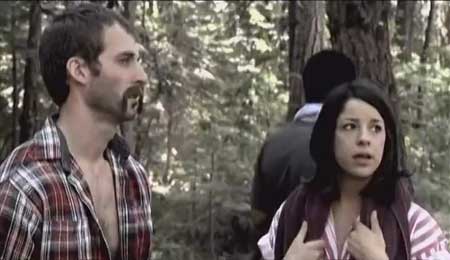 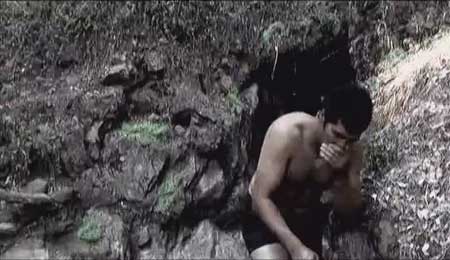 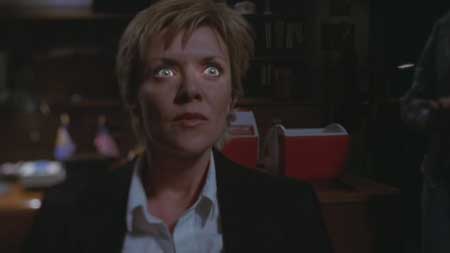 The cinematography is nauseating and I mean that in its’ purest sense. I’m sure the directors had thought there was some innovative camera trickery deployed here to get the audience into the first person perspective. A lot of chase scenes are so bouncy and all over the place I found myself having to put the film on pause to get my equilibrium back on track.

The opposite of the desired affect is achieved, plus I just about lost my popcorn and previous lunch at the same time. Throughout a lot of the story the grainy color would suddenly be black and white or such a dull hue it was next to colorless. The transformation held no relevance. There wasn’t any exposition offered in the story at the time. It was just an eye sore giving me a gradual migraine by the minute.

Clearly it’s a family affair as the Ellering name is plastered all over the project. I can only hope it was a fun family activity that brought everyone closer together because it certainly will fall way off its mark in terms of entertainment value. Which brings me to the costume, make up and prop department: what exactly was this? If it was a spoof on creature features and a knee slapper at forest flicks then I can kind of get the appeal. A film about the Sasquatch or Yeti seemed like a brilliant idea and has rarely been approached with true artistic integrity. The execution of Lost Woods bastardized the idea so ruthlessly I highly doubt I’ll pursue anything about Big Foot viewing ever again. The costume looks as though it was dug out of amusement park dumpster, the glowing eyes look so pathetic it’s not even funny. And then, just when we’re supposed to believe the filthy ape man creature is big foot, it actually pursues it’s would be victims and proceeds to engage in some shadow boxing that would put most light to bantam weights to shame; truly absurd. I only wish that Precious Paul was available to redeem the project with perhaps a picture about the Legion Of Doom or the Road Warriors. Lost Woods was just completely lost on me.

I wanted to like Lost Woods so much I’d even broken a carnal rule of any artistic critic and read some other reviews. Some were stunning as they completely differed as drastically from night to day as my own. This merely emphasizes the point that although Lost Woods clearly was not for me, there’s a market for it somewhere. Perhaps this little ditty could slide snugly into your campy collection of movies so bad, they’re good; Then again, maybe not.