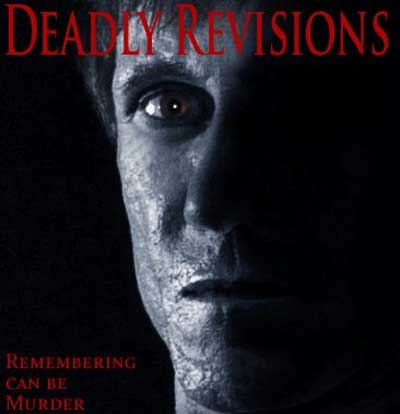 “While we liked the old title, which was the title of the screenplay, we wanted something totally fresh and more specific to the story we are telling,” Blair explains.

Star Bill Oberst, Jr. endorses the change. “The new title really has more intrinsic meaning,” he says. “I mean: yes, I’m a writer and I was in the process of making script revisions when I had my accident, but now it seems like it’s my life that’s getting revised. I have these horrific visions that keep changing…and I don’t know which versions are reality. If any of them are.”

Bill Oberst Jr.’s iconic screen presence has haunted dozens of films and his role in the Emmy nominated “Take This Lollipop”–the most popular application in Facebook history–has made him an international phenomenon. He’s very excited about his role in DEADLY REVISIONS.

“The script twists so much the audience has to keep reevaluating the information they get,” Bill explains. “And my character is a totally unreliable narrator!”

“And a nice little twist on top of everything,” Blair adds, “is that the title itself is a revision. How perfect is that?”