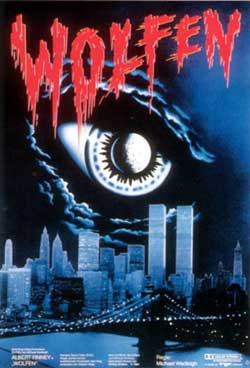 1981 was the year of the “Werewolf” in Hollywood as no less than three major films were released that year that featured menaces of the lupine variety. First out of the gate was Joe Dante’s classic “The Howling” which featured Rob Bottin’s amazing creature transformation effects and is considered a true horror classic. Secondly we got to experience Rick Baker’s makeup effect wizardry in John Landis’ “An American Werewolf In London” which is also a bonafide all time classic and got Baker the first Academy Award for makeup effects. Then Michael Wadleigh’s “Wolfen” was released….

Before I get into the film let’s talk a bit about Mr. Wadleigh shall we? Best known for directing the seminal music documentary “Woodstock”(1970) “Wolfen” was the first movie he directed since then eleven years later. He has since directed a couple of Woodstock related documentaries (Jimi Hendrix: Live At Woodstock” (1999) & “Woodstock: The Lost Performances” (1990) which might make him seem like a something of a one trick pony who just happened to direct a horror film one year. But although pretty much ignored on it’s initial release and largely forgotten today “Wolfen” is a fascinating failure that deserves a bit of recognition today because it tried to do something different with the genre.

Based on the popular novel of the same name written by Whitley Streiber, “Wolfen” tells the story of Detective Dewey Wilson (A grizzled Albert Finney) who is called out of what seems to be a forced retirement to investigate a series of gruesome murders taking place across NYC in which the victims are literally ripped to shreds by some type of animal. The first murders we see in the film involve wealthy a wealthy businessman, his wife & their bodyguard who are returning from a ritzy function in Manhattan when the three of them are attacked by some type of animal(s). We later find out that this business man was on the verge of developing a slum ridden section of Brooklyn for commercial purposes and the locals were strenuously objecting to it. Later on there are people being murdered the same way in the South Bronx, which is depicted as a series of abandoned buildings & vacant lots that are populated by strung out junkies and alcoholics who are just looking to get either their next fix or their next drink. Who or what is murdering these seemingly disparate people and why? 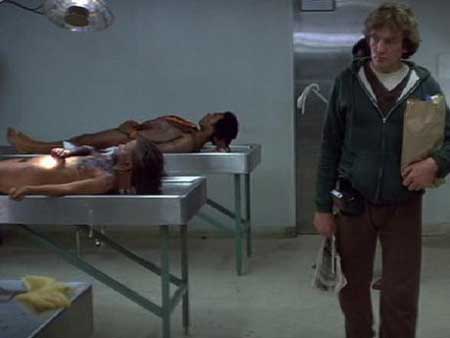 That’s where “Wolfen” gets both a bit preachy and interesting. It seems the killings are being perpetrated by an ancient clan of wolves that are merely trying to reclaim the land that they feel is rightfully theirs. They have been hunting on this land for ages past and have found themselves driven away by society and all of it’s trappings. Assigned to help Dewey is psychiatrist Rebecca Neff (Diane Venora), who is an expert in terrorism and begins to investigate the wide disparity of the murders and try to find a connection between them. She is informed that Dewey has had some “Family problems in the past but is basically a good man” when she mentions that she had thought he had retired for good but she doesn’t give his involvement a second thought afterwards which seemed a little silly to me but I didn’t write the movie Whitley Streiber and five(!) others were responsible for the script which does veer a bit from Streiber’s original novel by adding a few subplots to the mix which turn out to be red herrings and really add nothing but confusion to the finished product.

“Wolfen” is more of a precautionary tale dealing with mankind’s encroachment on the territory that the Wolfen call their own and merely trying to protect what they feel is theirs. Because of this it comes off as preachy & slow at times. The introduction of a local tribe of Indians who MIGHT be able to shape shift only muddles the plot more but Edward James Olmos gives the standout performance in the film as Eddie Holt, a bridgeworker who knows a lot more than he’s letting on. Gregory Hines plays Whittington, a hip forensic expert that assists Wilson & Neff in their investigation who is also shown to be a sniper as well later on in the film (A silly plot contrivance). Slowly, Wilson & Neff discover the true nature of the threat the city is facing but what to do about the near mystical creatures who appear out of nowhere & have absolutely no mercy once they’ve set their sights on you? 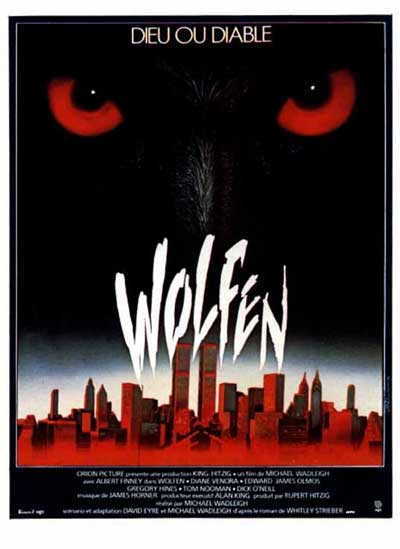 I think it’s something of a crime that Wadleigh never directed another film of any genre let alone a horror film because he obviously has a director’s eye and “Wolfen” is a suitably gritty film that feels like a New York film. The monochromatic POV shots of the beasts as they track their prey are the obvious inspiration for the same shots featured in “Predator” (1987). something you might not know about the Black saint is that he grew up on the streets where this film was lensed on in the South Bronx. As a matter of fact a bunch of us watched the day to day filming of this film when they were shooting here. If you’re familiar with this and a film called “Fort Apache: The Bronx” (1981) you’ve seen where I grew up. The acres of abandoned buildings and empty lots were our playgrounds as children and I can suffice for the reality of their appearance in both of these films.

The biggest problem that I have with “Wolfen” is one that a lot of people had with it when it was released, it’s just not scary! It does have a few inspired moments of violence & bloodshed but is largely more of a police procedural with some mystical Indian mumbo jumbo and some sharp fanged wolves tossed in for good measure. But as a film with a “Message” (As heavy handed as it is), it’s a pretty effective movie. Finney has the “Worn out” detective look down pat and all other performances come off extremely well. Wadleigh’s camera slinks over the city streets like a snake slithering across the Amazon, always involving the audience just through movement and nothing else. The script makes a 120 minute film feel like a three hour film at times but it’s never less than involving even though we know what’s killing people pretty much from the get go, we just don’t know why. 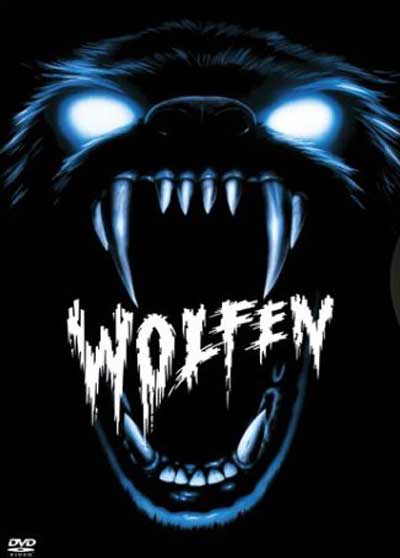 Since “Wolfen” didn’t feature any creature transformation scenes (Real wolves were used in the film) I suppose it disappointed a lot of people who were looking for a special effects extravaganza, especially after having witnessed both “The Howling” & “An American Wolf In London” but that doesn’t make it a bad film, just a different one. And it is radically different from what you might expect it to be. Whether or not you like it all depends on whether or not you can accept the idea of thousand year old wolves slaughtering people in NYC in order to punish them for encroaching upon their old hunting grounds. I for one thought it was pretty f*cking interesting despite it’s faults and rate it 2 1/2 shrouds out of 5. I actually enjoyed seeing my old stomping grounds after all these years and I thought that while flawed, the story had enough of a hook to keep me watching until it was all done. A nice change of pace from all of the “Werewolf” films that followed in the aftermath of “The Howling” & “American Werewolf In London”. If you’re looking for a interesting change of pace give it a shot.