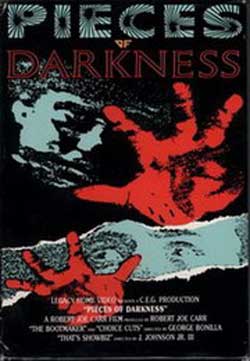 Hahahahahahahahaha! I am hysterical with madness! My editor has finally achieved his nefarious dream of driving The Black Saint insane! Oh, make no mistake acolytes…I fought the good fight. I suffered through dreck like “Greedy Terror” & The Rites Of Magick” and I soldiered on as a good Black Saint should. But enough is enough, my back is officially broken now. I don’t know where the master of evil that calls himself my “Editor” found this grade Z nonsense that calls itself a movie but it’s become plainly obvious to me that he has struck a deal with Satan in order to get this crap sent to me. I suppose the big red guy was getting word that my army was growing larger by the day & his reign was in peril. So instead of facing me man to man he decides to make me insane with these lousy movies. And much to my chagrin, he has succeeded. “Pieces Of Darkness” is the last nail in the Black Saint’s coffin.

But what exactly is “Pieces Of Darkness” you ask? Shit…I’m asking myself the same thing and I’ve seen it. It purports to be a horror film that fancies itself to be a low rent version of “Creepshow” by weaving three short stories (Only two of which are introduced by “Hosts”) together. Suffice it to say that the producers fail miserably, actually miserably is too soft a word. The word hasn’t been entered into the English language that can adequately describe how low down awful this movie is.

The first story is called “The Bootmaker” and it is introduced by Sgt. Rick, an undead soldier than warns us that he’s a “Mean green fighting machine that sticks grenades up his ass to loosen his hemorrhoids”. Exactly why a zombie soldier wants to let us in on his anal issues is beyond me but what do I know? He then tells us that he has a story for us, “Something with guts” he intones. Then he reaches into his pocket and pulls out what looks to be some raw ground beef, squishing it in his hand and letting it fall to the ground. Oooooh, SCARY STUFF IS ABOUT TO GO DOWN NOW! The story tells of two Vietnam vets who survived an ambush in battle & have gone on to live normal lives after their return. One of them, Richard is happily married with a young son & the other one, Michael, runs a successful boot making business. But Michael is having a secret affair with Richard’s wife and she wants to break it off. You see she’s feeling guilty about the whole thing now and she thinks it should end with them being friends. Of course Michael doesn’t take too kindly to this news and formulates a plan to get Richard out of the picture which involves inviting him over to his home to shoot some squirrels! Mention is made of Richard’s unique tattoo’s but we never get to see them and this becomes something of a sticking point because of what happens later. Michael ends up shooting Richard in the back, burying him and forging a letter to his wife claiming that Richard is leaving her for another woman. He then manages to worm his way back into her life but he is plagued by dreams featuring his long dead platoon telling him that they’re “Waiting for him”. So what does this drive him to do? Well it involves digging up the body & making something with it that’s pretty much a dead giveaway as to what happened to poor Richard. All I learned from this episode is that making boots must have been a great way to make some money back in 89′ because Michael has one hell of a nice home & his business only has one employee. Must be to keep the overhead low I suppose. This episode is totally worthless and only proved that there is a way to make 35 minutes feel like 3 hours. I began feeling faint as it reached it’s end but there was more to come…

The second episode is called “Choice Cuts” and it’s introduced by someone who calls himself “The Tomb keeper”. The tomb he’s keeping is nowhere to be seen and he looked like a really old guy wearing a black shower curtain over his head as he stands in front of a fire. He takes a moment to congratulate us for making it this far into the “Netherworld”. Then he gets into the story which tells of two brothers, Herb & Hymie, who run a butcher shop. Herb is a large, overbearing & racist brute of a man and Hymie is just a little mousy guy who feels for the locals who are having a hard time making ends meet. Herb cuts the ground beef with liver to stretch the meat but still charges the same premium price for it. He claims that the “Niggers & Beaners” deserve no better and can’t tell the difference anyway. Of course Hymie doesn’t agree but is too much of a wimp to make a big deal about it. A elderly black woman comes in to purchase some ground beef & tells of how times are really hard so Hymie gives her a couple of pork chops on the house out of pity. Herb lambasts him for this afterwards & Hymie apologizes for doing it. Herb goes out on a date & leaves Hymie in charge when a young Hispanic woman, Lucetta, comes in to buy some meat. But after some banter she realizes that it’s getting dark and she doesn’t want to go home alone so Hymie offers to escort her home if she’ll wait for a few minutes so he can close up shop. She invites him in to meet her mother and not long afterwards a romance begins between Hymie & Lucetta. But Herb is more than a bit jealous of the relationship. So when Hymie finds out that Herb went and attacked Lucetta after a confrontation between the two, Hymie cuts Herb up into deli slices. Two elderly women walk into the shop and Hymie offers them his “Choice Cuts” as we see Herb’s head on display! Ooooh, MORE SCARINESS! But it’s still not over yet… 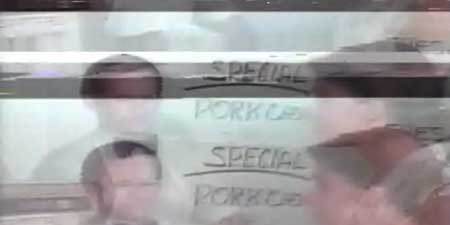 The third and last episode is called “That’s Entertainment” but sadly it’s about as far from entertainment as can possibly be. Apparently, the budget didn’t have any wiggle room for a host for this episode. It seems to have been tacked on to extend the length of the movie but only serves to make the whole experience that much more insufferable. It tells the story of Roger Destry, a really bad actor (Both figuratively & literally) who is looking for his big break in show biz. Unfortunately he’s such a bad actor that his dream will never come true. I don’t even wanna get into the rest of this ridiculously awful tripe. I’ll just say that he gets to audition for a role that mirrors his life & for some reason Satan turns up and poor Roger gets eaten by people in some excruciatingly bad zombie makeup. Why does any of this happen? Even if I knew I wouldn’t tell you because that might entice you to try and find this abortion and watch it. I am making it my solemn duty to make sure that no one suffers through this mess although I ought to try and share my pain and recommend it.

I refuse to divulge the names of any of the actors who appeared in this garbage and I just can’t bring myself to mention the name of the director (George Bonilla) but I can say that this is one awful movie from start to finish. There is absolutely nothing worthwhile here to recommend watching it. It looks awful, it sounds awful, it is awful, painfully awful. I cannot imagine this film getting any kind of release in any form but apparently there was a VHS copy released to an unsuspecting public way back when. I do not know where my godforsaken wretch of an editor drug this up from but as I said earlier, I do think he has some sort of deal with Beelzebub going on and if the goal was to drive me insane, they have succeeded. And I’m married with children! You’d think I went insane eons ago living in the situation I’m in but I was all good until this thing crossed my doorstep.

Well played Mr. Editor, you have won the battle. But with my last breath I will go ahead and bestow “Pieces Of Darkness” a well deserved ZERO rating. Please acolytes, don’t try to find this and watch it. It will serve you no good to seek it out, you will suffer so much and regret the 77 minutes of your life that you wasted on it. I have truly thrown myself on the proverbial grenade this time & I don’t do that very often so avoid this at all cost!