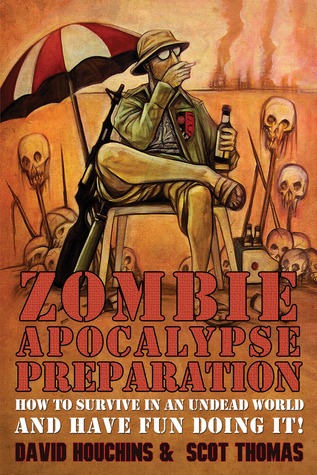 Zombie Apocalypse Preparation: How to Survive in an Undead World and Have Fun Doing It!
Authors: David Houchins and Scot Thomas
Permuted Press

Oh yes, thank you very much indeed, David and Scot, for putting this delightful thing out there. “Zombie Apocalypse Preparation: How to Survive in an Undead World and Have Fun Doing It!” is a wonderfully entertaining, funny and observant book which does exactly what it says in the title, albeit with a hefty dose of humour.

The authors clearly know their zombie lore and all of the tropes of the genre, and those tropes are mercilessly lampooned and eviscerated throughout the book’s length. It’s all good natured, though, and fans of the zombie genre are going to have a blast with this release, yet another fine title from Permuted Press, the Royalty of post-apocalyptic horror fiction.

Presented in a quasi-educational fashion (albeit one with its tongue firmly in its cheek), and mixed in with Facebook quotes and other ephemera, the book presents a thorough and thoroughly entertaining look at the numerous things to think about when faced with the end of the world at the hands and jaws of the undead.

Giving practical advice in such a funny way seems to have come naturally for authors David and Scot, who approach the material very much as fans of the genre, rather than lampooning for the sake of it. The writing style is both fluid and believable, which always helps with funny books.

The two have crafted something that is going to be treasured by a lot of people, and misunderstood by a lot of others, but hey, ain’t that kinda what horror’s about? In a genre which is becoming rapidly overcrowded with essentially the same book, it’s good to see the humble zombie handled with such love and good natured mockery.

With the threat of a real zombie apocalypse becoming ever more prevalent (seriously, look outside), there’s never been a better time for a book like this to emerge. Thankfully, it’s far from the mess that it could have been, and rather than just being a cash-in on the current interest in the jolly flesh-eaters, it’s a wry and knowing work which ca be enjoyed by both diehard genre fans and regular readers alike.