Book Review: The Rise and Fall of the Nephilim – Author Scott Alan Roberts 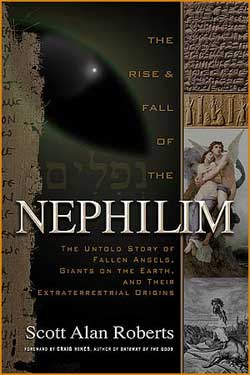 The Rise and Fall of the Nephilim: The Untold Story of Fallen Angels, Giants on the Earth, and Their Extraterrestrial Origins

The Nephilim, not a word you hear everyday. In fact its more relational to fiction than of historical event. Author Scott Alan Roberts tends to lean towards the factual notion of these strange beings with a release that covers more info than you ever wanted to know. The Nephilim, to bring you up to speed are thought to be the offspring of the “sons of God”, former giants, or some version of angels who mated with human women back long ago. There has been documented proof of large bones and pictures circulating, though the subject has been at best a bit elusive. What Scott Alan Roberts has done is bring all the facts and points together to ask the question..what if? and maybe there is some truth to these mythological tales of old.

The book I found very informative but a bit too much history for my mind to process. On that note, the read will of course appeal to an audience who flourishes in these kind of factual discoveries. As a consumer, I found it hard to process one chapter with the next, which led me to believe I might have to re-read it all again to get the full spectrum of knowledge wealth here. The book originates from the fine publishers at New Page Books further challenging our minds with bits of mysteries lore and origin. I’d have to say if you have any interest in those beings, then this book will certainly meet your needs for a full overview.

The Nephilim are approached from a few perspectives. One being the sons of God, while other suggestions pointing to alien begins who visited us long ago. All angles are investigated to the sound of historical documents that might reveal a bit of their origin. While tackling this subject, the book also questions the very fabric of religion and our past. The Old Testament name of God which is called “Elohan” is suggested to be not just 1 but many. Inviting more food for thought.

Creation is a mystery that has alluded man for centuries basing itself on the beliefs of old but never exactly connecting all the dots. Could it be that their exists a secret origin that doesn’t align with our present day understandings. Deeper aspects are researched including the “Book of Enoch” and that of “Constantine”

The book while being an impressive study tends to fall to the wayside in terms of relating to its intended audience. It reminded me much of when I first encountered the film “Dune”. Alot of new words, terms, and ideas that can’t be digested quick enough to connect all the pieces. “The Rise and Fall of the Nephilim” sets an exhaustive foundation that really doesn’t get to its purpose till chapter 8. In between we are introduced to terms like “Gnostic Decad”, “Duodecad”, “Nommis”, “Dogon Priests”, “the Divine Council”, and a number of cultural inferences from the Celtics, Romans, Scandinavian and Chaldean bases. We are told about the flood of Noah and how its relates to these beings. We are told that despite all the mixed opinions and cultural differences that it could be “The Watchers”, demons, angels, sons of gods, and/or possibly alien giants. More simply we are told that it was visitors. We hint at UFOs, Roswell and other beings making connections to our past. But from a reader standpoint, we get a goulash of mixed ideas, genres and religious references seemingly mixed together to sort out. At the end of the day, heavy eyed and worn I came away with nothing I could talk about or remember.

In closing “The Rise and Fall of the Nephilim” feels more like an elaborate summary to a extensive volume set. I cannot recommend this book to causal readers and only can say its designed for educate scholars who have some familiarity with the different areas that Roberts discusses. I feel only then can you really make an intelligent interpretation of what he has presented.

Book Review: The Rise and Fall of the Nephilim – Author Scott Alan Roberts