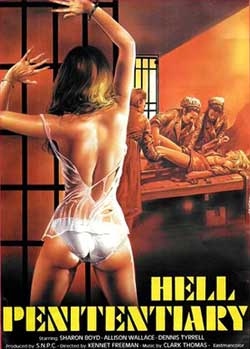 Julia, a famous physician, infiltrates a prison in an attempt to find a witness to her sister’s killing, but instead she becomes the victim of a sadistic warden’s sexual brutality.

Day 2 of the 80’s experiment. For those of you who don’t know, here at HNN we’re trying to get into films from wayback in the 70’s & 80’s. Films that you might never have heard of but might want to see after reading about them here. Yesterday I was assaulted by a film called “Greedy Terror” and today, believing that it couldn’t get worse, I watched something called “Hell Penitentiary“. A “Women In Prison” movie? COOL! I love me some nekkid wimmen in prison movies! The ladies are all angry at each other and the guards are all mean and the warden is a pervert (Pretty much the plot for every WIP flick). Films like “The Big Bird Cage” and “The Big Doll House” are personal favorites of mine. Hell, hall of famers like Sid Haig, Pam Grier & Vic Diaz made their bones on WIP flicks of the 70’s. I grew up watching these movies on the big screen and they’ll always have a special place in my heart. 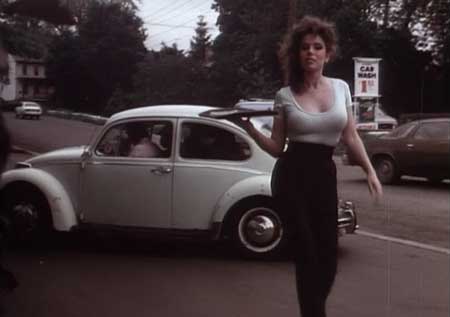 But “Hell Penitentiary”? Once again I have been duped by my editor into watching something that can barely be called a film let alone a WIP film. I tell ya, I toil over a hot keyboard into the wee hours of the morning…trying to make the guy happy and what do I get for my blood, sweat & tears (Lots of tears)? Do I get the cool movies to watch and review? Do I get movies that were made on a budget of more than $500 dollars? Do I get movies with one recognizable name/face? Nope, I get “Hell Penitentiary”, a badly dubbed, poorly written and terribly acted excuse for a WIP flick.

Oh well, let’s just get this out of the way shall we? Directed by Gianni Siragusa, “Hell Penitentiary” is about a woman who wants to find out who murdered her sister. Julia (Linda Jones) is convinced that when her sister Louisa was killed in an auto accident it was really the handiwork of her lover, mob boss Frank Cuomo, who found out that Louisa kept a much younger lover behind his back and became ferociously jealous. But without any witnesses there is nothing the police can do but to call her death an unfortunate accident. But Julia finds out that there may in fact be a witness to the murder but she is locked away in prison. So Julia has to get herself arrested and incarcerated to get the lowdown on what really happened to her sister. 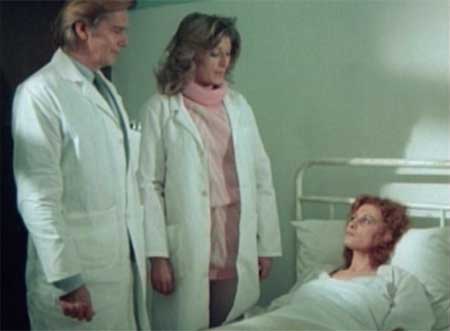 And what a prison this is! If you’re gonna make a WIP flick then shouldn’t you at least make an attempt to have it seem like it’s taking place in an actual prison? This looks like it was filmed in someone’s home over the weekend. None of the female guards wear uniforms (More like oversized lab coats), the two male guards do but we only see them for a few minutes. The cells the ladies are forced to sleep in are cramped but look pretty freakin’ cozy otherwise and none of the prisoners wear any standard prison garb. How many prisons do you know of that allow short skirts & blouses that are never fully buttoned? Well there’s one in Italy for those of you who wanna do some time but just got back from Bloomingdale’s and don’t wanna think you wasted your money on new clothes.

The person who knows what really happened to Louisa is Sarah Winters (Enrica Saltutti). Sarah was forced to drop a dime and tell Frank where Louisa could be found. And just to keep her quiet he planted drugs in her bedroom & alerted the police. Sarah is kept heavily drugged to make sure she’s kept quiet as well although we’re never told if the warden is getting anything from Cuomo for keeping Sarah in a near comatose state. The warden (Rita Silva) is an Ilsa wanna be…Blonde, statuesque, sadistic & a lesbian to boot. And the prison governor (Cesare DeVito) is also a sadistic womanizer whose wife lives with him in the prison but is deaf & blind so she’s unaware of his antics. 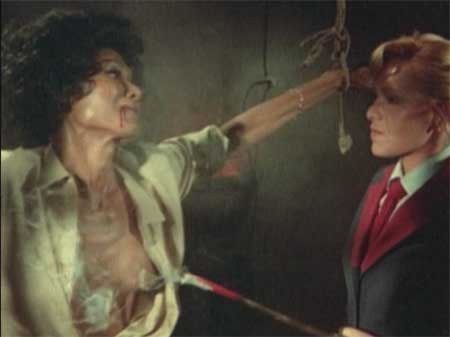 The prisoners are the usual stereotypes save for one. Her name is Eureka Thompson (Ajita Wilson) and at first glance I thought she was an Italian actress with a lot of make up on to pass as a black woman. She reminded me a bit of Tamara “Cleopatra Jones” Dobson at first but her name sounded familiar so I googled it and I remembered where I heard it! Ajita Wilson was born a male (George Wilson) & had a sex change operation in the 70’s. This would explain why her breasts seemed a bit….off center. She appeared in quite a few hard and soft core sex films before she tragically passed away from a brain hemorrhage in 1987. She really stands out since she’s about two feet taller than every other woman in the film. She’s the “Tough” one who ends up taking one for the team at the end of the movie and she’s also the best actor in the film. One very important point that needs to be mentioned is that in addition to all of the bad acting on display we’re also treated to a prison that seems to be filled with unattractive women. Y’know, when The Black Saint sits down to watch a WIP movie he expects to see some attractive women in there. But in actuality, Ajita is pretty much the prettiest woman on display here…which might disturb me just a little bit after I finish writing this…

The sex on display is the standard soft core “Bump N’ Grind” but it’s oddly joyless. The actors just don’t seem to be into it all too much except for Ms. Wilson, which still hasn’t disturbed me just yet. The men are hysterically overwrought as they pretend to be humping on some poor unattractive actress, their hips go up and down in a ridiculously over the top manner. There’s a great line spoken by the governor as he assaults a prisoner: “I feel like a little muff diving”, after which he sorta mushes his face against her belly for a second or two before he just starts ridiculously pretending to hump on her again. I got a laugh out of that but nothing more, there is nothing titillating on display here at all. Just a lot of groans & ugly people pretending to bump uglies.

The budget wasn’t big enough to cover squibs either so whenever someone gets shot it happens off screen and the victim puts their hand to their stomach & moans in pain. The warden has the bad habit of torturing uncooperative inmates with a red hot poker applied to their stomachs but we see them in the shower immediately afterward with nary a scar on them so they couldn’t afford any SFX make up either. There is a bit of fake blood in the beginning when Louisa & her lover are squished in the car but I guess they broke the bank with the few drops of blood they used there so if you’re looking for some gore or grue look elsewhere. 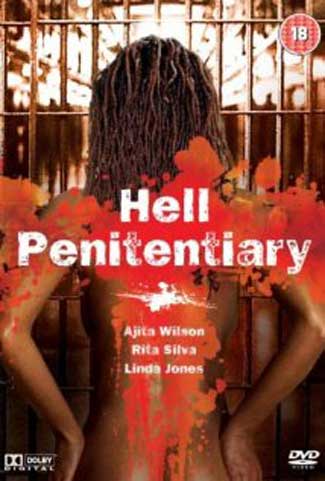 As a matter of fact if you’re looking for anything even resembling what you’d expect from a WIP flick (Besides nudity) then don’t look here. The film ends in a very pat fashion and reminded me of an episode of “Murder She Wrote” (Not that I’ve ever seen that show…not me). But it’s a lousy film that did nothing for me entertainment-wise & I’m nearly positive that it ain’t gonna titillate any of you either unless you’re the type that needs to see every WIP movie ever made. If so, be my guest but don’t say I didn’t warn you. “Hell Penitentiary” gets a 1/2 shroud rating and that’s just for Ajita Wilson’s performance. It’s nothing epic mind you but she literally stands head & shoulders over everyone around her and she seems to be into her character. So if you want to see her in a lousy movie, here it is!

Now I have to cringe in fear as I not so anxiously await what the next movie assigned to me is gonna be. Lemme tell you, the sadistic warden in “Hell Penitentiary” has NOTHING on my boss. But I have a job to do so until next time….pray for me.