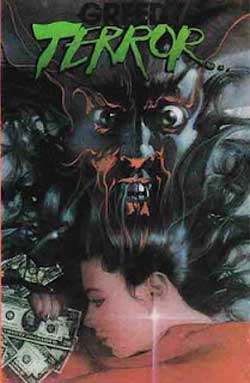 A trilogy of horror stories with ironic twists: a teenager tries out a love potion, a waitress gets involved in a kidnapping plot, two brothers plan to cheat an insurance company by faking their death.

Here at Horrornews we are striving to keep ahead of the pack by digging deep into the vault and reviewing films from the 70’s & the 80’s that some of you might not be familiar with. Now let it be said that I am a big fan of 80’s horror/sci-fi films and there are literally hundreds of them that were being parsed out to the review crew over here at HNN. I was expecting to receive some pretty cool flicks to review and I hungrily opened up the package I was sent with the films to watch & review. “Oh what surprises will I receive to review”? I thought to myself giddily as I pulled the first disc out and saw the title “Greedy Terror”. Wait a minute…”Greedy Terror“? What the f*ck is “Greedy Terror”? Oh well, only one way to find out so I happily put it in my DVD player and then the terror began. But it was the wrong kind of terror people…the kind of terror that only a really bad movie can create. 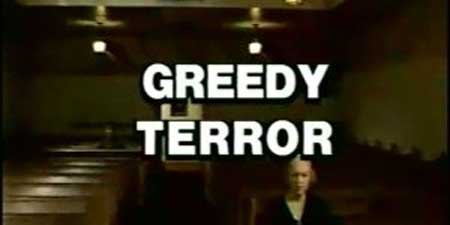 Originally titled “Shock Chamber” and produced for Canadian television “Greedy Terror” is a anthology film comprised of three stories linked together through an interview being done in a church between a reporter and the mother of some really rotten sons. A different son (Played by the same actor) is featured in each of the three stories. Now before I continue let it be said that The Black Saint is a BIG fan of horror anthology flicks. “Dead Of Night”, “Dr. Terror’s House Of Horrors”, “Tales From The Crypt” & “Creepshow” are among my favorites. “Greedy Terror” is not on par with these (& other) esteemed omnibus films. In fact, “Greedy Terror” might just be one of the worst films I’ve ever seen and I’ve sat through some bad movies acolytes…

It all starts with the reporter (Victor P. Farkas) attempting to finagle a story out of Mrs. Shadoff (Eileen Williams) at a funeral for one of her deceased brood. It seems that all four of her sons turned out badly and she has a story for each of them. The first story “Symbol Of Victory” tells the tale of young Ron (Russell Ferrier) and the crush he has on his father’s secretary, Linda (Jaqueline Samuda). Ron is smitten with Linda but she’s pretty much oblivious to his clumsy attempts at winning her affection. She eventually gives in and accepts a date with him and even invited him into her home for some coffee afterwards. As they watch a movie on television together someone knocks on the door. Linda opens the door to find a scruffy looking man (Doug Stone) selling potions to cure all types of ailments. 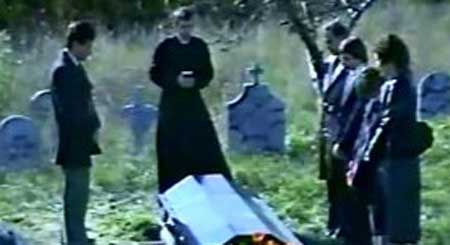 She closes the door & asks Ron to get rid of the man, which he does. But the next day he tracks the man down & asks if he has a potion to make Linda fall in love with him, and of course he has one of those potions laying around! For a reasonable price too! And once he gives a dose of the love potion to Linda she is all his. Ron announces to his father (George T. Cunningham) that he plans on marrying linda and his dad is pleased with Ron’s choice but all is not what it seems. The scruffy potion salesman is actually Linda’s lover in disguise! And they’re setting poor Ron up to cash in on his dad’s wealth. Of course it all leads to the most obvious “Twist” ending you could possibly imagine. The only interesting things about this story are the fact that the filmmakers want us to believe that Ron is a teenager when the actor playing him is at least 30 years old and the amazing feat of making a 20-25 minute segment feel like it went on for 120 minutes. 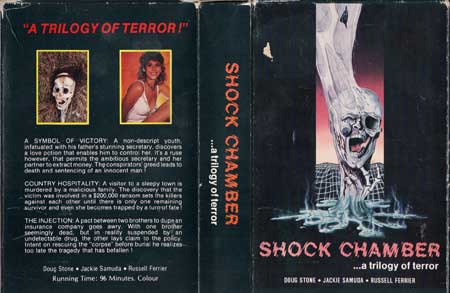 This leads us to the second story called “Country Hospitality” which opens with a car pulling up to a backwoods gas station looking for a fill up. The driver, Cameron (Doug Stone) is a snooty city slicker who makes no effort to contain the utter disdain he has for the seemingly “Special” attendants who emerge from the station. As the 2 of them begin to clean his windshield & top off his tank he goes inside to get a soda. He sees a poster of a lovely lady named Blanche as he sips his drink. When he goes back to his car, it won’t start and he is furious! He demands that the two attendants, Buford & Junior (Frank Mcnalty & J.D. Philip) fix it immediately. They suggest that he take a walk to the nearby diner as they work on his car. Our lovely poster girl, Blanche, is the proprietor of the establishment and that makes Cameron very curious to meet her. So he goes over & orders some pie & coffee and begins to chat up the lovely Blanche (Karen Cannata). Within minutes they’re making out and minutes after Cameron drops dead! Y’see Blanche is in cahoots with Buford & Junior and along with her husband, Oral (Andy Adoch) they murder unsuspecting customers by poisoning their drinks. After which they take their money & other valuables & then sell their cars. They also dispose of the bodies in a big ditch a few miles away. Cameron had a LOT of money with him & this leads to distrust between the four of them which leads to murder & another really stupid “Twist” ending. At least this segment moves a bit quicker than the first one did although everything else about it just reeked.

The third and final story is called “The Injection“. Here we meet brothers Nick (Bill Zagot) & Stan (Again, Doug Stone). Stan is a doctor who is facing multiple malpractice lawsuits and Nick is…well he’s just Nick. Stan has a plan to inject Nick with a serum that will make Nick appear to be deceased so as to cash in on a $400,000 dollar life insurance policy that Nick has just signed up for. Too bad the insurance agent (Bill Boyle) smells a rat and decides to watch Nick very carefully from across the street with a set of binoculars. Of course this doesn’t turn out too well for the two and in the end the jig is up with the insurance man blackmailing Stan for the entire amount of money. That’s pretty much it! No big “Twist’ to be found here other than the fact that the insurance man ends up falling in love with Nick and running away with him but we don’t find that out until after the segment is over and the film goes back to Mama Shadoff & the reporter in the church. 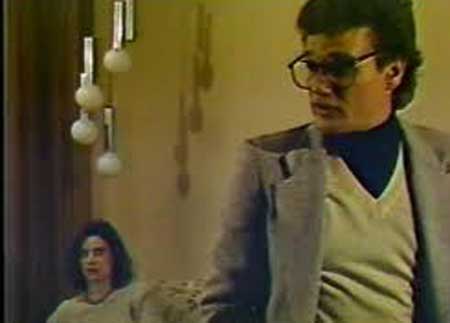 “Greedy Terror” was produced for Canadian television in 1985 and it seems to have had a budget of about $200 bucks or so. It looks like it was filmed with a consumer grade camcorder and cinematography was not a priority during production since it’s a grainy, hazy mess. The acting is about as good as you’d find in a high school play & the “Special Effects” don’t exist at all so I don’t know why someone got credit for them. Writer/Director Steve DiMarco is probably a good egg but I hope he’s gone on to a job he could actually do well like working the French Fry station at Burger king or something similar. I have to make special note of the soundtrack by Peter Dick, especially the tune played throughout the second segment “Country Hospitality” which sounds like it might’ve fit in one of H.G. Lewis’ gore epics of the late 60’s. It reminded me of a really sh*tty reworking of “Dueling Banjos” except there were no banjos involved, just a harmonica and a synth pretending to be an out of tune guitar. It is really epic in it’s awfulness but oddly mesmerizing at the same time. It must be heard to be believed. 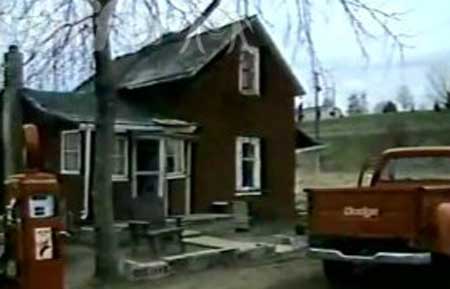 I guess it’s safe to say that I didn’t like “Greedy Terror” in the slightest. What the heck did they do for entertainment in Canada during the 80’s? If this is an example of what Canadian Television offered then why wasn’t there some kind of riot somewhere after it aired? Canadians should still be ashamed that this was produced in their country, I am ashamed of myself for watching it but I have a job to do, don’t I? 1/10th of a shroud for “Greedy Terror” and that’s for the bizarre tune that plays throughout the second segment. Otherwise avoid it like the plague…please. And to think I thought my editor was beginning to like me…I’ve got a bunch more of these 80’s “Classics” to peruse and I am afraid of what awaits me.

I should’ve sent the boss a Christmas card last year. Maybe I’d get some better movies to watch….Damn.