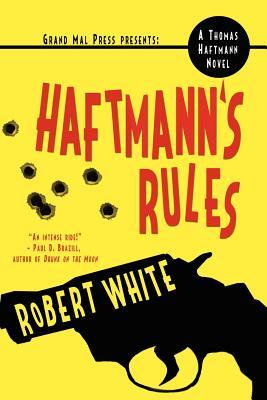 “Blood is like a rainbow, like red violet when it first flows, black in the moon light.”

Every now and again a volume of literature is so gritty, so enthralling, so psychologically spell binding we tend to forget what particular genre it slides most neatly into. Robert White’s story of private d*ck Thomas Haftmann and his obsession with solving an increasingly complex case is if nothing else versatile in this respect. You need not be a fan of Dark Noir, detective or mystery tales to engage with nails cinched deep into this suspenseful novel.

When veteran private eye Thomas Haftmann is approached by potential client John O’Reilly to find his missing daughter Annaliese he eludes to his economic woes illustrating the initial sketching unto the reader of our protagonist’s perpetual spiral into disdain. He takes the case on after several stipulations and a generous pay scale even though his former cop instincts tell him something is off about this character. With a sense of rejuvenation Haftmann delves into his investigation with passion.

As he interviews O’Reilly’s ex-wife and Annaliese’s mother Ingrid our fearless private eye soon learns a deep dark secret behind the motive of her sudden departure. Without unveiling too much of John O’Reilly’s skeletons it would be suffice to say his prior actions were anything but pure of nature. Venturing forth Haftmann continues to peel back the layers of the investigation while he questions former friends, roommates and even a previous professor. The pieces begin to click together in this puzzle leading our investigation to the ghettos of Boston.

The body count quickly rises as he finds and confronts Annaliese. The tale takes a shocking twist as Haftmann utilizes his former law enforcement ties to learn of a sinister motive fuelled by politics, perversity and white supremacy. Soon the private eye must watch his back and sleep with one eye open as he comes closer to unveiling the truth behind the magnitude of this underground society.

Dark, graphic, unapologetically violent this urban tale contains all the components of a good old fashioned crime novel. The plot is so engaging we frequently forget we’re reading anything but a horror novel. This bursts the flood gates wide open for debate if this collection even belongs on a horror based site for review. I assure you faithful phenoms of fright this most certainly is not horror. However the action sequences and brawls are depicted with such vibrant brutality and merciless force the terror quite evidently is found in the rain of blood. If a film adaptation would surface, which is entirely plausible given talent of White’s prose, one Quentin Taratino would make an ideal directional candidate in spirit of Reservoir Dogs or Kill Bill.

The sense of empathy border lining pity for the pathetic Thomas Haftmann enables us as the reader to identify with his woes. We can relate to his exploited insecurities of the detective, take them on as our own and cheer the crime fighter on even to the very bitter end. His cynicism is captured effectively and his banter is often comical if not charming on all scandalous fronts from his ex-wife running away with another man he’d happened to discover them in the throes of amorous passion to the road map of scars and debilitations of a battered body from constant pursuit of righting a world that’s gone horribly wrong; to his views, perceptions and perspectives on the very legal and justice system itself and all its corruptions with flaws along the way. Haftmann is undoubtedly the voice of the common man.

The controversial topics of racism, drugs and prostitution is covered to morbidly enthrall the readers. Let’s face it our society is fixated on the doom, gloom and dread of circumstances. Anyone tune into the six o’clock news recently? Enough said. White not only realizes this concept of enchanted psychological mutilation and celebrates it, exploits it by searing the very last nerve of innocence lost. In Haftmann’s spare time he even seeks out swingers for torrid, debaucherous menagerie.

Robert White knows the subconscious well and tells an immensely gripping tale on numerous levels. I’d openly embrace the opportunity to read any future endeavors of Thomas Haftmann’s adventures, a refreshing change from the standard of horror.