Premiering at the Arclight Cinema in Hollywood on Thursday, April 12th:

Benevolent Monster Productions is proud to announce the upcoming release of BEAST WISHES – The Fantastic World Of Bob And Kathy Burns. Produced and directed by filmmakers Trish Geiger and Frank Dietz, this feature-length documentary chronicles the story of how Bob and Kathy became the goodwill ambassadors of sci-fi and horror film fandom. Married for over five decades, this amazing couple have spent their lives nurturing the creative spark in talented people, many of whom went on to become award-winning masters in the Hollywood makeup and special effect industries. 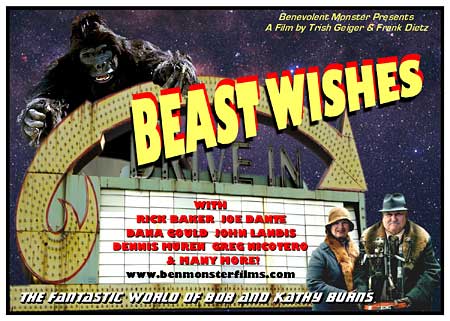 The film takes a heartfelt look at all the fascinating aspects of Bob and Kathy’s lives. From their work with 1950’s monster creator Paul Blaisdell, to Bob’s career as a gorilla suit performer, their legendary Burbank Halloween shows and their stunning collection of rare props from the most famous genre films of all time. But the heart of the film is the two real treasures of their museum – Bob and Kathy themselves – and an incredible array of guest stars share their thoughts and affection for the couple.

Oscar-winning makeup and FX artists Rick Baker (GORILLAS IN THE MIST, ED WOOD), Chris Walas (THE FLY),Tom Woodruff, Jr. and Alec Gillis (ALIEN VS. PREDATOR) and Dennis Muren (THE EMPIRE STRIKES BACK, JURASSIC PARK), Greg Nicotero (THE WALKING DEAD) and Steve Wang (PREDATOR), directors John Landis (AN AMERICAN WEREWOLF IN LONDON), William Malone (THE HOUSE ON HAUNTED HILL) and Joe Dante (GREMLINS, THE HOWLING), author David J. Schow (THE CROW), and comedian Dana Gould (THE SIMPSONS) are just a few of the special guests that relate their own memories and appreciation for all that Bob and Kathy have done for the world of movie magic.

Trish Geiger is a Rondo Hatton Classic Horror Award winner for producing Larry Blamire’s old dark house comedy DARK AND STORMY NIGHT. She also starred in TRAIL OF THE SCREAMING FOREHEAD and (along with partner Frank Dietz) THE LOST SKELETON RETURNS AGAIN. Frank Dietz is a two-time Rondo Award winner for his classic monster caricature work, and also appeared in the cult classics ZOMBIE NIGHTMARE and BLACK ROSES. The pair teamed up in 2011 to produce BEAST WISHES, because Bob and Kathy are “the living link to Hollywood film history,” and their story deserved to be documented for the entire universe to enjoy.

BEAST WISHES makes it’s grand premiere on April 12th, 2012 , 7:30 pm at the Arclight Theater in Hollywood, CA. The screening will be followed by a Q&A with the cast and crew, hosted by actor/comedian Dana Gould.

Tickets for this event are now available exclusively at www.creaturefeatures.com.

Presentations and screenings are also scheduled for Monsterpalooza in Burbank, CA on April 13-15, and WonderFest in Louisville, KY on May 26-27.

For more information and updates on the DVD release, visit our BEAST WISHES Facebook page at www.facebook.com/ pages/Beast-Wishes-The-Bob- and-Kathy-Burns-Movie/ 136028563147264, and our BEAST WISHES blog at beastwishes. blogspot.com.

BEAST WISHES – The story of a man, a gorilla…and the woman who loves them both!