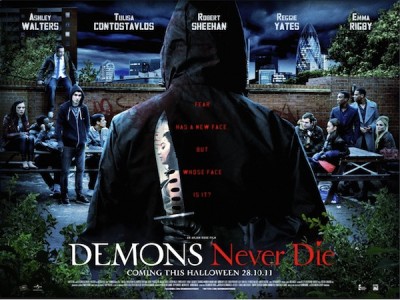 When a young girl takes her own life, Archie and the other Suicide Kids decide to follow her lead and form a pact. But as the group begin to die one by one, Archie realizes that they have all become the target of a masked killer and that his commitment to death has become a terrifying fight for survival and a battle to protect the girl he loves. But who’s the killer?

While I was watching “Demons Never Die”, I couldn’t shake the feeling that I had seen it all before. From the very first frame, there is no denying that filmmaker Arjun Rose used Wes Craven’s “Scream” as a template for his debut slasher. Thankfully, it wasn’t just a rehash but more like a blueprint of how to pace a film. The British slasher is sleekly produced with a thumping soundtrack that manages to entertain in many respects whilst being a bit of a letdown in others. One thing for sure, this has one hell of good cast that make this one well worth checking out.

Amber (Tulisa Contostavlos) is at home, all seems lost since she had separated from her boyfriend. Once they talk on the phone, things start looking up. Then she apparently commits suicide. This inspires a group of kids, Samantha (Emma Rigby), Jasmin (Jennie Jacques), Kenny (Jason Maza), Ricky (Jacob Anderson), Cain (Femi Oyeniran), James (Jack Doolan), Ashleigh (Shanika Warren-Markland), and Archie (Robert Sheehan) to form a pact. Each of them have their own reason for wanting to end their lives so they plan on doing it together at Ashleigh’s party. When Jasmin is attacked, Officers Bates (Ashley Walters) and Mason (Reggie Yates) question whether it was real or in her head. There is someone out there that starts killing them off one by one, causing the group to realize that there is so much in life that they will miss out on, especially the bond that they have created with on another. The question remains, who is it that is killing them off? 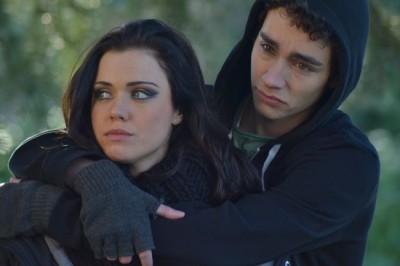 Rose isn’t afraid to show off a little bit of style in his direction. The opening sequence that introduces the cast is pulled off in an entertaining musical montage. There are several throughout the film, all were enjoyable. The characters are more stereotypes than characters, though we get to know some better than others. The story helps us to get a sense of what they are about, so it evens out. The acting from everyone is pretty top notch. They are all likeable in their own way and for me the main reason to give the film a chance.

As much as I liked it, it could have been better. They could have knocked it out of the park if they had actually showed some bloodletting. It was a weird thing, I was digging the soundtrack, liking the characters, their story, then they start getting offed with no real chase or suspense. A real shame since you could feel their pain (mainly through solid song choices), when things turn around for them you can feel their happiness (also through a solid song). The murders just kind of happen. If they took the suspense level up a notch and really let loose with the FX, then this could have been a classic. Very little blood is shown and with the lack of suspense, that just let me down. 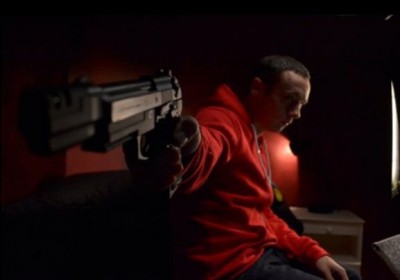 Arjun Rose is a talented director. He made me feel for the characters and I didn’t want to see any of them go. I also felt he did a wonderful job with shooting the first half of the film in a way that expressed how they were feeling and as their outlook changed, so did the overall atmosphere. I will, without question, recommend the film to most. It worked best as a bleeding heart drama. Probably not the best thing to say about a film that is marketed as horror but that is how I felt. The soundtrack featuring such artists as Robyn, Dionne Bromfield, and The Bullits (among others) is sure to be a major selling point. “Demons Never Die” had the potential of being a game changer, instead ends up being just a decent entry into the genre. It wasn’t forgettable by any means but just not quite there. **1/2 (out of 5) Its’ still worth a look. 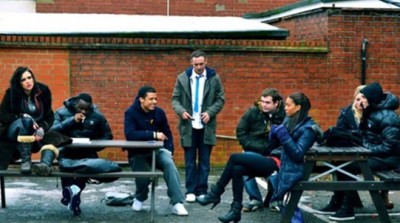 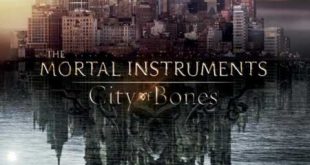