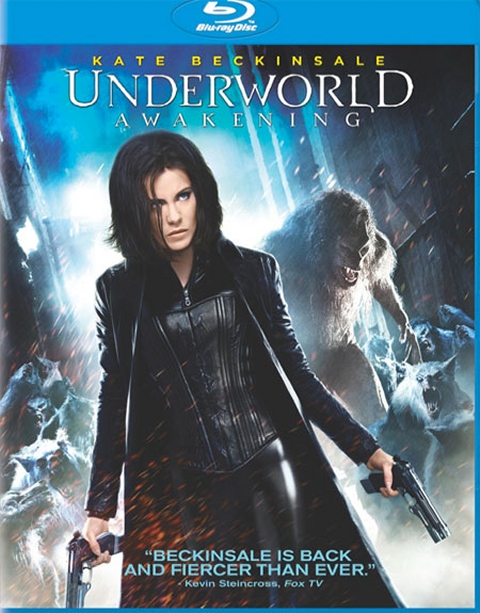 Culver City, CA (3/20/12) – Kate Beckinsale (Underworld 1 & 2, upcoming Total Recall) is back in action like you’ve never seen her before in Lakeshore Entertainment’s 3D box office smash hit UNDERWORLD: AWAKENING, rising May 8th on Blu-ray 3D™, Blu-ray™ and DVD—all of which include UltraViolet—from Sony Pictures Home Entertainment. In the latest thrill-packed chapter of the blockbuster Underworld series, Beckinsale reprises her role as vampire warrioress Selene for the ultimate 3D battle between Vampires and Lycans.

This time, she’s joined by a new generation of sexy, ass-kicking warriors played by Michael Ealy (upcoming Think Like a Man), India Eisley (TV’s “The Secret Life of the American Teenager”) and Theo James (You Will Meet a Tall Dark Stranger). Now, after wowing movie audiences with its high-flying action and eye-popping special effects, UNDERWORLD: AWAKENING soars to stunning new life on Blu-ray 3D™ and Blu-ray™, loaded with special features, including the Blu-ray exclusive “Cracking the Underworld,” a picture-in-picture experience that takes viewers on a visual journey through the rich history of all four Underworld films. Fans can trace the history of the werewolf and vampire bloodlines and learn surprising secrets about their favorite characters. Also, exclusive to the Blu-ray 3D™ are previsualization 3D sequences, which were created early in the production process to help the filmmakers visualize some of the film’s key action sequences.

UNDERWORLD: AWAKENING brings a stunning new dimension to the epic battle between Vampires and Lycans, as the first film in the franchise to shoot in 3D. This time, vampire warrioress Selene (Beckinsale) escapes imprisonment to find herself in a world where humans have discovered the existence of both Vampire and Lycan clans, and are conducting an all-out war to eradicate both immortal species.

UNDERWORLD: AWAKENING was directed by Måns Mårlind and Björn Stein. The screenplay was written by Len Wiseman, John Hlavin, J. Michael Straczynski and Allison Burnett from a story by Len Wiseman and John Hlavin based on characters created by Kevin Grevioux, Len Wiseman and Danny McBride. It was produced by Tom Rosenberg, Gary Lucchesi, Len Wiseman and Richard Wright. The supporting cast includes Charles Dance (TV’s “Game of Thrones”) and Stephen Rea (V for Vendetta).

The film has a run time of approximately 88 minutes and has been rated R for strong violence and gore, and for some language.

Exclusive to the Blu-ray:
o Cracking the Underworld: Picture-in-Picture Experience

· 3D Exclusive:
o Previsualization Sequences
Also available from Sony Pictures Home Entertainment is Underworld: The Legacy Collection, which includes all four films from the franchise on Blu-ray™ with UltraViolet