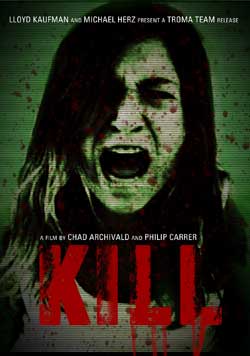 Six strangers awake to find themselves the new tenants of a mysterious old house. Terrorized by insane Tiki-men in masks and taunted by their deranged captors,it soon becomes clear that only one singular action will save them: Kill.

I first have to say, if I woke up alone and locked in a house with five other strangers, I would not be as calm as these people. Really, I would be one mad screaming hussy.

KILL is a gruesome little tale of Six strangers who wake up alone in their bedrooms, all wearing white fruit of da looms and find themselves locked in a house decorated like a tacky Hawaiian retreat. There are cameras everywhere and a horrifying voice that booms from a hidden PA.

They all are married and in their rooms sets a picture of their significant other. They have no recollections of the events bringing them together. It is not long before they meet another stranger in the house who is a little worse for wear. He is unable to tell them anything but lets the audience know right away something hinky is going on.

The strangers, Richard (Ryan Barrett), Emma (Jennifer De lucia), Don (Andrew Ferusoo), Sherri (Carrie Prout), Lauren (Casey Dutfield), Jeremy (Thomas Goften), Kirk (Pete Soltesz) first ponder “the why” of how they all came to be together at Hotel Creepy. Then of course the question led to ‘How do we check out’. 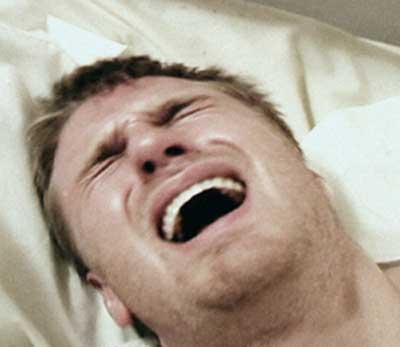 The house, built more like a maze than anything, full of dark hallways and spooky places, to include a dark basement that a few of our guest get to visit. The house is full of doors that wont open and windows that wont raise, or break.

They were graciously hosted by a bunch of insanely weird Tiki men and a Knight in Shining Amour (Gerrit Sepers), (Chad Archibald), (Philip Carrer), (Michael Chudnousky), (James Poirier), (Chris Vettore), (Ernst Rincher), (Jay Justin) who terrorize them. They are treated to a lovely meal with hidden surprises and then the fun really starts.

The group begins to bicker and fight. There are some lovely CAT FIGHTS! By then they have figured out how they all have came to be, and they have figured out how to leave. They must play THE GAME to leave the house and see their loved one again. Only catch, they must fight to the death in order to win, and there can only be one winner. In ‘Hotel Creepy, you can check in but they don’t wont you to check out.’ the winner gets to meet the ring leader ( Burnaby Q. Orbax) and his lovely Game show host Princess (Morgan Odwyer).

KILL (written and directed by Chad Archibald and Philip Carrer) is a gory little film that will get your blood to pumping. Those white fruit of da looms don’t stay white long. A bunch of jump in your face scary moments. You never know what’s behind the corner.

You cant help but join in on the groups frustration as they try to escape. A few twist and turns and a lot of moving around in the dark, these people get put through the mill. Just when you think it is over you are horribly mistaken.

The movie had times in it that I wanted to scream at the actors and throw stuff at them. At one point a dude yells at another dude who is trying to bust down the door, “Be careful, this is someone’s house.” Really? Oh wow. I wanted to reach into the television screen and slap him silly. There were a few other cheesy lines and situations that have you wanting to throw stuff. Other than that it was a cool movie. I recommend watching this movie with friends. Six of them to be exact. Make sure ya’ll leave the front door unlocked though.

This movie is a product of Black Fawn Films. The Original Score was done by Sonic Disturbia. Produced by Pete Soltesz, Chad Archibald and Philip Carrer. Production assistants Gerrit Sepers and Reese Eveneshen. Director of Cinematography Martin Buzora. Many of the people that were before the camera also played roles behind the camera. I bet this film was a blast to make.