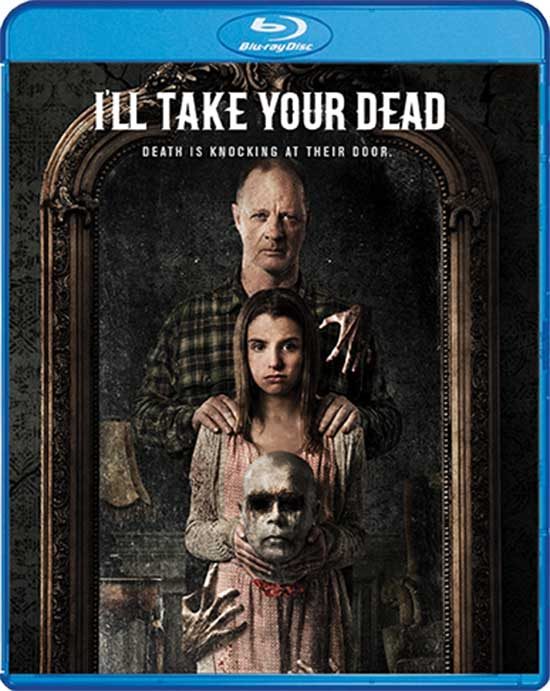 I’ll Take Your Dead follows William who has a simple job, he makes dead bodies disappear. This isn’t something he likes to or even wants to do, but through circumstances out of his control, his little farm house in the country has become a dumping ground for the casualties of the gang related murders in the nearby city. His daughter Gloria has become used to rough looking men dropping off corpses and is even convinced that some of them are haunting their house. After a woman’s body, is dumped at the house, William begins his meticulous process when he realizes, she’s not actually dead. As the gang activity increases, William patches the woman up and holds her against her will until he can figure out what to do with her. As they begin to develop a very unusual respect for each other, the woman’s murderers get word that she’s still alive and make plan to go finish what they started.

The Candy Butcher is a thing of urban legends. Some say he eats the dead that he makes disappear. Others say he uses the body parts to create some twisted monster. But everyone knows that if you drop off a dead body with the right amount of cash, the Candy Butcher makes the body vanish, and that person is never, ever, heard from again.

Funny thing about urban legends is that what you are often told is nowhere close to the truth. Fear and suspicion and imagination can create an image that no one wants to pull back the curtain on, because – what if the legends are true? 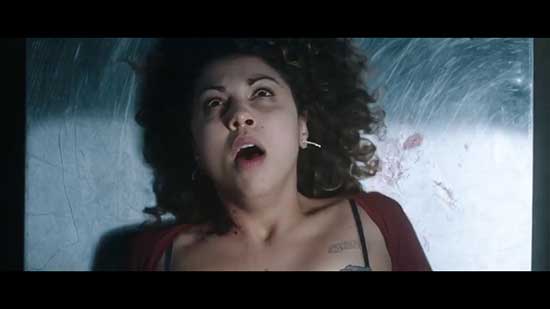 “I’ll Take Your Dead” uses an urban legend of a “cleaner” (a person who removes/eliminates crime evidence illegally) as the basis for a movie that, while it may not be a straight-up horror film, weaves legend, the supernatural, and human monsters to tell its tale of a young girl coming of age.

The mythical Candy Butcher turns out to be real. He is a nondescript man living with his 12-year-old daughter on a large farm in the middle of nowhere. Various miscreants from the inner city show up with 3 bodies – two guys and one woman. From the beginning, one of the thugs, Reggie, takes the whole legend of the Candy Butcher as a joke, even as the others with him try to shame him into fearful respect.

Unfortunately, the Candy Butcher’s biggest weak point is his love for his daughter, and Reggie sizes that up within moments of the daughter, Gloria, answering the door.

Even though one of the victims being dropped off is “a kid”, which violates the Candy Butcher’s unspoken rules, he accepts the load just to get the city parasites away from his house. The Butcher figures the payment for the load should be enough to allow him and his daughter to leave the days of blood and acid behind for a happier future.

The rule of allowing one exception will lead to more becomes the defining rule as the Butcher discovers that one of the bodies, the woman, is not dead.

At this point, you may be asking, “How in Hell is this a horror movie?” Well, the horror element starts when Gloria’s part of the story takes center stage. Gloria has deep fears of what seems to be some human-like specter with burning skin that waits in the house’s basement. Only Gloria can see it. She feels dark intentions behind the entity.

After her father has disposed of the two males, their spirits appear to Gloria. The older is angry and hostile like the spirit in the basement, but the younger one seeks to communicate with Gloria, though his message seems unclear. As the story progresses, the visitations increase in number and become more desperate in their need.

Meanwhile, the Butcher, for all of the legend about him, is really just a guy who made an exception years ago and ended up in a career line he never heard about from his high school guidance counselor. He just wants to escape his current life, take his daughter, and live a life together that is full of light, warmth, and no dead bodies.

The list of exceptions disrupting the quiet sameness he and Gloria had enjoyed for years grows as the gang who dropped off the bodies learn that the woman, Jackie, is still alive. They decide to correct that problem in any way required.

Clearly, “I’ll Take Your Dead” is not a straight horror film. If you go into it expecting the typical tropes and lots of blood spraying, you will be greatly disappointed. The film uses the supernatural elements sparingly to relate a tale of a young girl who learns the quiet life she had known, much like her childhood, is slipping into the past, and no one is quite who they appear to be, especially the dead.

The film works hard to provide the viewer with a fair balance, showing you each main character and how they play a part in the ultimate outcome. As a result, the film seems slower paced than it really is. Again, this is more of a character study set in a period of change and turmoil for nearly every character involved than it is a horror film. Character studies can be slightly languid, but a horror film presented in the same style is rather atypical.

Given the odd nature of the film with its limited locations, the weight of the film falls directly on the shoulders of the actors. Yes, the script needs to be good, but without strong and/or compelling performances, a film like this will sink, even with excellent writing, if the actors do not bring their best.

Fortunately, “I’ll Take Your Dead” does give you plenty of solid acting from everyone in the cast, even in the smaller roles.

Given her age and the range she is called upon to express, Ava Preston, as Gloria, transitions from emulating her father’s dismantling of corpses to a powerful reaction to her first period to being frightened to the point of mobility to sharing a beautiful quiet moment with her father at the dinner table. Since her character is the thread tying the whole narrative together, Preston could make or break the film. Thankfully, she did an excellent job. Here’s hoping she avoids the pitfalls of other child actors and grows into a major star, if she desires.

Aiden Devine plays William, Gloria’s father and the mysterious Candy Butcher. He has been in a ton of movies and television/cable series since the mid-80s. You will find yourself recognizing either his face or his voice and may wonder where you’ve seen him. That could be one of over 100 roles he has done in his acting career. He is a dependable actor who can be counted on to give a good performance, even if everything around him, including the script, stinks on ice. Kind of like character actor Richard Jaeckel used to be before he passed. 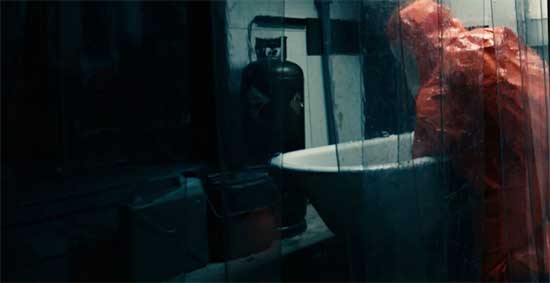 Given nowhere near as much to do, Jess Salgueiro, as Jackie, manages to express compassion for Gloria while acting both frightened and revolted by William (simply due to the Candy Butcher’s reputation). She gets her own story arc in which she comes to terms with what happened to her and how she ended up in the hands of the Candy Butcher. She could have done more if the role was bigger, but she certainly maintains the level of acting quality set by the first two actors mentioned.

In spite of all the horrible things each character had done or will do during the movie, the film does feature one “real” monster – Reggie, played by Ari Millen. He is, at first, a know-it-all, jaded smartass with some pedophile leanings, but as the film progresses, the character’s real darkness comes out. However vile and disgusting Reggie is, Ari Millen plays the character as if he is a bad car wreck on the roadside – you just can’t seem to look away when he is on screen. 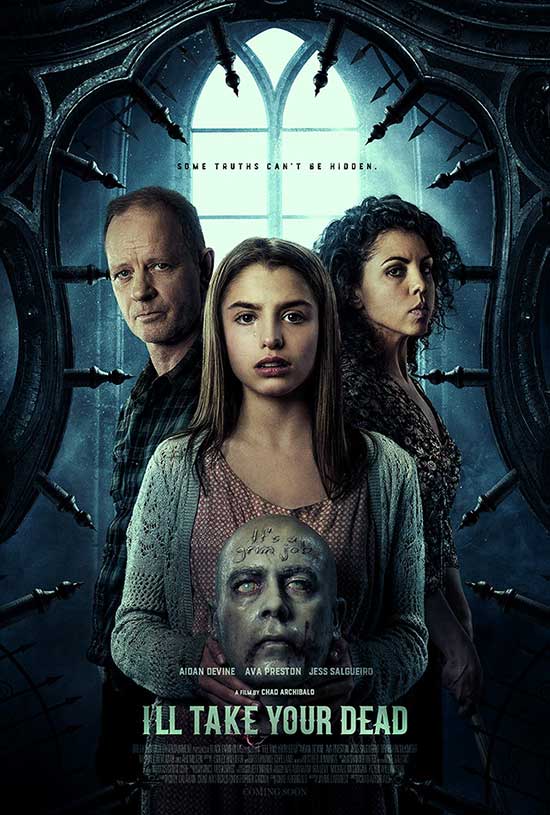 Is “I’ll Take Your Dead” Oscar-worthy? No. The movie telegraphs its climax in the opening scene. There will be ENDLESS comparisons to “The Sixth Sense”. The climax has a hint of deus ex machina that may be a turn off for some viewers. The deliberate pacing will chase away most horror fans who are looking for something far more visceral.

Faults accepted, “I’ll Take Your Dead” gives an interesting blending of genres that will appeal to those seeking something different from the “stupid teens must die” or “when will YOU puke?” type of movies, not to mention it makes 86% of current horror films seem like they were made by incompetents who do not understand the language of cinema.