Brides of Sodom and a new website for Empire Films 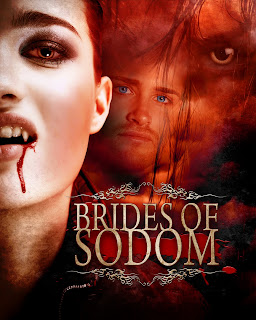 “Brides of Sodom” may go down as Creep Creepersin’s magnum opus. It is certainly is his most ambitious endeavor yet. The film is set in a post apocalyptic world where vampires named for Greek gods, and witches rule. It is a classic vampire story with some real twists: The plot centers around a male vampire named Eros who falls in love with a human named Samuel. Eros wants to “save” Samuel and make him a vampire, but Eros evil vampire lover, Dionysus has other ideas. Matters are complicated by Eros’ sister/lover, Persephone, an ambiguous Bookkeeper and three witches, who know secrets of the universe and The Laws Of Eternity. The film features Shakespearian elements, with a touch of Bram Stoker, Anne Rice. It is stylistically dark and brooding. This is not just another vampire film. In many ways, “Brides of Sodom,” serves a metaphor for social and cultural issues central in our daily lives.

“Brides of Sodom,” was written and directed by Creep Creepersin, produced by David Sterling, with Michael Elkin and Matt Chassin serving as associate producers. The executive producer was it’s star Domiziano Arcangeli, founder and CEO of Empire Films LLC. The film also features original music by the award-winning composer Shawn K Clement. The new website www.bridesofsodom.net features a new trailer for the film, which shows it to be an action packed thrill ride into a very disturbing future.

“Brides of Sodom” is scheduled to begin appearing at several alternative, horror and independent film festivals beginning later this year. The trailer for the film can also be seen on Vimeo.