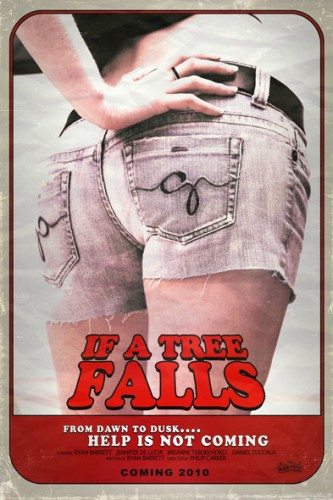 Siblings, Brad and Lisa Carpenter, along with two lifelong family friends, Will and Vanessa, set out road-tripping to an annual family reunion. They make the decision to find a place to stop and camp for the night. What ensues is a violent disturbance by six masked assailants, without motive or reason. The group find themselves living a night of psychological games and physical terror, and as morning dawns; the reality of what will come is more terrifying than anything the group could have ever imagined.

So, I was mistaken. When I sat down to watch “If a Tree Falls” I thought I was getting ready to watch the Academy Award nominated documentary about the Earth Liberation Front. Instead, I was treated to something completely different. I was way off but the film I did end up watching wasn’t so bad either. “If a Tree Falls” is a Canadian lensed horror film that also happened to be a faux Grindhouse type of film. I mostly enjoy these films that have been popping up. Yeah, I know I can go back and watch the real thing when I want to, though it can’t hurt to have a few more to help remind us of a time we remember so fondly. There have been many over the last few years, most were fun, and only a few were truly great. This is a good one, not great. There are some terrific moments, the detail, and the time that was put into making the film look like a Grindhouse picture is appreciated. It was a shame that more of the time wasn’t spent on developing the story. The story is way too simple and in the end it just kind of felt like there was no point at all.

Brother and sister Brad (Ryan Barrett) and Lisa (Jennifer De Lucia) along with their long-time friends Vanessa (Breanne TeBoekhorst) and Will (Daniel Zuccala) have set out on a road trip to go to their annual family reunion. On their way, they decide that they are going to stop and camp for the night. In the middle of the night, they are assaulted by a group of masked lunatics that are attacking without reason. What was supposed to be a fun and relaxing vacation, quickly turns into a nightmare that they cannot escape from.

It is hard to distinguish this film from an actual 70’s grindhouse flick. We have everything from a 70’s inspired soundtrack to the scratches and hissing on the film. There is a grainy, dirty look to the film and some negative interference as well. I would have thought that the film actually took place in the 70’s if they hadn’t mentioned their cellphones in it. The lunatics in the film had a pretty menacing look to them. We never see their faces, only the nylons they have pulled over their face. What I thought was a nice touch was that each of them had rips or tears in them, all in different spots, that distorted the faces, each with a unique look, making them much more terrifying. Director Gabriel Carrer does a great job setting the tone and guiding his actors through a nightmarish journery.

The only two problems I had with the film were 1) the lack of story, and 2) in order to have set this film apart from the rest of the pack, the violence factor should have been much more shocking. There really wasn’t much of a story. They go on the trip, make a bad decision, and they are dead. The lunatics just kill without reason, there just isn’t a dramatic catch. Most of the violence happens off screen. There is a nice moment at the end but that was too late for me. If they truly wanted to make something special, the violence should have been ramped up and much more brutal to have had an impact.

“If a Tree Falls” is a good film. It lovingly pays homage to the 70’s grindhouse films we grew up on but doesn’t do much more than that. Just a little bit more effort and this could have been a terrific, mean, and brutal film but instead it is just a noble effort. *** (out of 5) Not a bad film by any means, some of you may actually love it. I am even recommending it. There is much to like here. Just don’t expect the WOW factor that I feel they could have achieved. 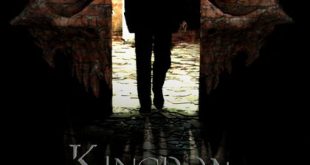