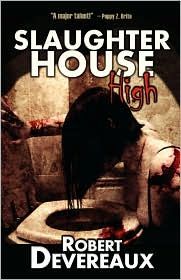 Bizarro fiction is an interesting idea if you think about it. Especially if you’ve finished reading Slaughterhouse High written by Robert Devereaux, who has a talent in the bizarre factor. The novel is in every word gory, disgusting, revolting and any other good word used to describe how entertaining this story was. I enjoyed it for its creativeness and brutality. The characters were likable. The kills were creative. This is the type of novel that should’ve been made into a horror movie. It felt as if Rob Zombie decided to take a stab at a Friday the 13th sequel, or if Quentin Tarantino decided to do one as well.

I had a blast reading this book. The author isn’t afraid of pushing the envelopes too far. There was sex, and zipper-mouths. There was also fascinations with earlobes, not to mention having them covered and revealed in sexual acts. If there was any reason for any fan of the horror genre to go and buy this novel, then here is mine: GET THE BOOK!

You will be captivated by the world Robert Devereaux created in this novel. The characters themselves are intriguing individuals who as the reader you either care for or can’t wait to see butchered.

Slaughterhouse High plays out like a slasher movie. The suspense is good and it is fast paced. One could either love this novel or hate it, me I love the storyline. It is beyond bizarre, beyond grotesque. The sleaze in this book is given to the reader in full doses and will have you craving more if this type of novel is your thing.

Robert Devereaux plays tribute to not just the writers of bizarro fiction, but to the movies we have come to love. We have grown accustomed to the shock fest that has been released by independent movie companies, now we have a publisher in Deadite Press who is dishing out extreme novel after extreme novel. One can hope that Robert Devereaux plans to write a sequel to this slasher tribute.