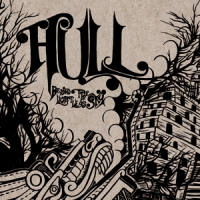 It took weeks to figure out what I liked about Beyond the Lightless Sky. I enjoyed the album from first listen, then played it over and over, enjoying it more each time. But what defines Hull? What makes them unique? They’re certainly talented and excellent songwriters, but there are tons of talented bands who write good songs. That isn’t enough to stand out. It hit me while listening in the car that in a genre defined by excess, Hull is, dare I say, measured and consistent. They incorporate many styles and techniques in their music, but never sound gimmicky. When screaming, they scream in the context of the song. Bluesy, acoustic guitar riffs aren’t interludes; they are integral parts of the sound.

Hull is commonly described as stoner metal or sludge metal, but these descriptions do a disservice to the band. While the grooves and long songs may appeal to those partaking in certain natural herbs and Doritos, Beyond the Lightless Sky does not fit into a small subgenre. Instead, it’s more like a heavy rock-and-roll album filled with metal riffs.

It’s not quite clear who does what in Hull. I’m pretty sure Drew is the lead vocalist. His voice ranges from hardcore to death metal, and generally fits the songs well. The engineers often mix him into the background, making an interesting effect. If you’re listening while working, the voice doesn’t disturb your train of thought, but forces you to pay attention when you want to hear him.

Beyond the Lightless Sky is a guitar-heavy album. Drew, Nick and Carmine mix it up a lot. Some songs feature doom-laden riffs with long, drawn-out chords, others include bright solos, and even acoustics. These guys do everything but shred. Like the vocals, guitars have an interesting mix on the album. They are turned up higher than usual, often louder than the drums.

Energetic drummer Jeff teams with Sean in the rhythm section. Jeff does a good job with his crash-heavy approach, but I couldn’t often distinguish any bass on the album. Most songs seemed to be driven by guitars with drum and bass as a fill-in.

Don’t be fooled into thinking that Hull’s moderation makes them boring – it’s quite the opposite. Instead of having a few brilliant moments, Beyond the Lightless Sky impresses from beginning to end, drawing you in and never letting go. Metal fans need to get this album.

Tags Beyond the Lightless Sky Hull