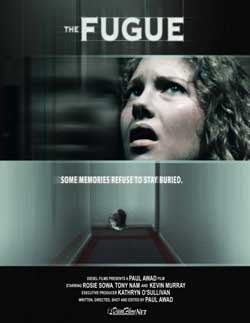 Nora Dunn is a struggling artist desperately trying to recover from a childhood trauma, but her life is turn upside down when she is haunted by the vision of a long dead childhood friend. Is the spirit a hallucination or a foreshadowing of something worse to come? It is up to Dan Tsang, a young police detective to solve the mystery and save Nora before it is too late.

“The Fugue” was written, directed, shot, edited and scored by Paul Awad. This is the filmmakers feature debut, though he has made a number of horror/thriller shorts. When one name takes that many credits, it usually is not a good sign. Unfortunately for this film, that seems to be the hard learned truth. The movie revolves around a police investigation that gets tied up around a mysterious girl who experiences hallucinations, fugues, and black outs.

The film begins by introducing Nora Dunn, who sees a vision of a small girl in her apartment hallway. After a chase into the nearest elevator, where the girl is waiting for her, Nora dies at the sight of the girl. Why someone making a horror film would have “death by black out” is beyond this writer. It seems like a poor attempt at making an artistic film. This movie does not cross into that realm of filmmaking style. Then, of course, the dead Nora is revealed to actually be alive, even after the police and paramedics have examined her body.

All this happens in the first few minutes of the film, where it becomes incredibly evident that Awad wanted to make, to put it nicely, an homage to Asian-inspired horror films “The Ring” (2002) and “The Grudge” (2004). Homage, and simply copying, ride a fine line. The Asian influence comes in more than just the editing style and cinematography. The story takes place in China Town, with Asian police officers handling the case.

Any sense of originality, character development, or surprise, gets washed away every few minutes with the appearance of another vision from the film’s protagonist. After a stereotypical dinner with her father, Nora leaves during an argument, only to see the images of the little girl that have been haunting her, again.

Awad seems to have tried, very hard, to make a film that would sell to his audience. For doing everything himself, he holds his own. One can not help but think that if he were to have received help from more crew and artists, the final product could have been much better. The scares consistently fall flat, while the effects leave much to be desired. The consistent use of strong color correction is distracting. One of the most bothersome aspects of the film is its editing style. What should be a well paced scare scene, often turns into a slow, inconsistent extraneous segment. Much of the film looks like a music video. After such recent failures as “A NIghtmare on Elm Street” (2010) and “Friday the 13th” (2009), which were both helmed by popular music video directors, it has become apparent to many genre fans that this particular style falls flat in a style of storytelling where strong characters are a must.

None of the actors stand out as particularly good. New-comer, Rosie Sowa, does her best, and may even become someone worth watching over time. Every one else, especially Gregory Mach and Tony Nam, could have used more direction. When a director does everything themselves, often-times different parts of the film suffer. It is apparent that Awad focused on Rosie’s performance, and did not spend as much time as necessary with the supporting cast. Unnecessary character back-story also detracts from the concept of the film itself.

For a film where the lead is female, in a genre full of strong female protagonists (“Halloween” (1979), “Friday the 13th” (1980), “A Nightmare on Elm Street” (1984), and “Scream” (1996) to name a few), Nora is surprisingly weak. She is consistently in need of help, does nothing to avoid dangerous situations, and offers no real reasons to like her. Her daddy issues, haunted past, and desires to be creative all lead nowhere. This is unfortunate, as much of what draws viewers to this type of story, is finding out how a stereotypical character can surpass the odds, rise to the occasion, and beat their fears.

Overall, for what it is, Awad delivered something technically better than he should have. Even so, this film is not scary, thrilling, or surprising, and does not deliver what a horror fan might want. The blatant knock off of very popular, and recent, horror fare is disappointing. This script would have served itself better as a sequel in either “The Ring” or “The Grudge” series.