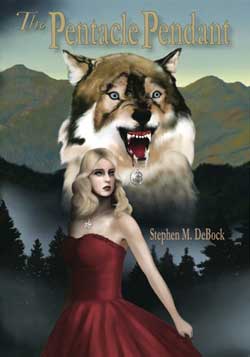 Claire Delaney, a stunning blonde vixen that can best be envisioned as a sort of Charlize Theron type is vacationing in the Caribbean. A tourist approaches her in standard tropical manner and the two volley back and forth witty and whimsical flirts. They agree to meet later for a midnight swim and hopefully in Johnny come lately’s mind something more.

The seducer gets more than what he bargains for as he becomes the seduced. The two engage in a heated beach side tryst that spills over into the surf. Shedding her swim attire, Delaney morphs into a terrifying beast that mauls her would be gentleman suitor, disemboweling him in a scene that puts the opening credits of Jaws to shame.

The plot transcends back to where it had all began. A lonely, jaded cynical Claire is positioned within the very core of her self loathing, a bar. She drowns her sorrows away when approached by Lukas Ehlrich. (Ironically De Bock cues dialogue about clichés here-the more consummate reader gets the impression the author is toying with us or ribbing us. Well done sir).

Lukas is a professor at the college Claire is studying to be an English major at. Despite Ehlrich’s thwarted attempts at stimulating conversation the two end up consummating their animalistic lust back at the professor’s apartment. We see a pattern forming in Claire’s personality. Her defense mechanisms come in several forms. Condescension, sarcasm and the infernal, perpetual grammar correction are her fangs and claws to bear. Make no mistake about it, Claire Delaney is a bitch. Wolf. Bitch? I do believe DeBock has got us again. Cleaver fellow.

In essence he makes Claire more human to the readers and perhaps more empathy is ensued. We don’t have to be submerged in a love affair with Madame Delaney, we merely have to be compelled with how the story turns out.

Lukas truly digs his conquest as he sinks his teeth into her jugular passing along the metamorphosis gene. Panicking that perhaps he’s acted on impulse he rushes off to counsel with mentor Gabe Zeklos.

We learn that Zeklos is in fact working on a cure for the werewolf curse. He expresses tremendous anger and disappointment in Lukas’s irresponsible actions. Ehlrich flights back to his flat, tail tucked between his legs ( I could do this all day, really) to confess his intentions to Claire. Of course she’s skeptical and outraged. He professes eternal love and vows to teach her the way of the night predator, the lycan.

The plot moves along brilliantly at this phase as some endearing conflict arises over their prey. Without howling out too much of what transpires, our fury friends develop a taste for human consumption that oddly enough has the reader baying at the moon along side with them.

As an effort to save face from the whole immortal/eternal damned soul/metamorphosis conundrum, Lukas sets up an interview internship with a publishing company. A friend of a friend (enter Gabe Zeklos again) refers the articulate and personification of perfect prose, Claire DeLaney to Radu Jones. Her dissection in the decline of the western written communication pays off as she quickly rises up the ladder of reading manuscripts for Jones Publishing.

Daciana Moceanu enters the fray. She’s Lukas’s academic advisor and incidentally Gabe’s wife. Claire senses something is awry with the Morticia Addams prototype. Her keen senses have not deceived her yet. I’ll leave these developments in the shadows to the delight of our mid night reader.

My only very minor gripe with the Pentacle Pendant is perhaps it was a little too much too soon. Like fine wine a gripping tale only gets better with age or in this case more compelling over time. Towards the climax I’m reminded of Robert McCammon’s epic 690 page wolfen tale, The Wolf’s Hour. Do yourself a favor, read each and dazzle your friends with your contrasts and comparisons. It’ll make for riveting c**ktail conversation, trust me. Then again as our society is so technologically co-dependent, the correlation with lessened attention spans is prevalent. Perhaps DeBock has managed to pull the wool over our eyes, yet once again.

A surprise ending that transpires makes this a howling good read.