In the sprawling, shadow-filled corridors and offices of a local industrial complex, an unstoppable killer stalks his victims. His weapon of choice: the long blade of a deadly machete. In its wake, the dismembered bodies of the unlucky.

Principal photography has wrapped on “Experiment in Horror,” the latest episode of the cult hit TV series, “Lee Martin’s The Midnight Hour.” In it, a corporate conspiracy drives young Garard Vicente (Justin Spaysky) and his trashy colleague Caitlyn (Erika Hoveland) to devise a lethal plan to murder their new boss—before she can destroy Garard’s career.

This latest episode features outstanding performances from Spaysky and Hoveland, as well as from supporting players Jan Cartwright (as Garard’s new supervisor) and Jim Causley as a security officer who becomes an unwitting pawn in Garard and Caitlyn’s bloody game of death.

For Cartwright, who played a devil-worshipping, cannibalistic hostelry owner in the season two episode, “Bed and Breakfast,” it was a homecoming of sorts. “This was such fun to do,” she says. “I spent the weekend being everyone’s worst nightmare of a boss, then being terrorized by a psycho killer.”

The episode was lensed by Peter Fox, whose Bava-esque frame paints a moody, stylish portrait of dread. His company, PLF Media, created the show’s production design and gory practical effects as well. Assistant director Meka Nelson managed the production’s logistical aspects and schedule while makeup artist April Canning brought out the best in the talented cast’s appearance, with the notable exception of her treatment of actor Causley, transformed into a bloody killing machine in her hands. Script supervisor Amy Kolly managed rehearsals and collaborated with DP Fox and sound recordist Mariel Watson captured the show’s audio track.

The footage is now in the hands of film editor/co-producer Brian Schoof, who is handling the exciting special photographic effects as well. Along with Fox, Schoof was recently featured in several metro Detroit newspapers for his fine work and significant achievements in local Michigan-based television. 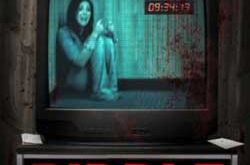 Halloween in November? It happens on all-new “Midnight Hour”