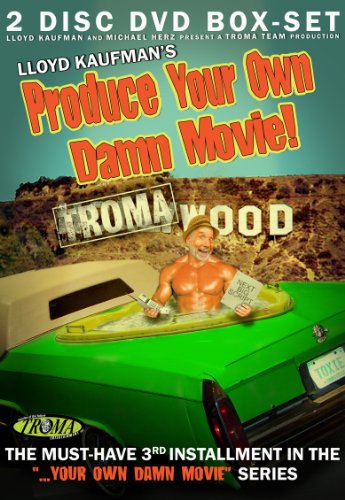 In the same vein as “Make Your Own Damn Movie”, Lloyd is back again to give you more insight into the filmmaking world by showing you how to produce your own damn movie! Learn all you need to know about being a producer through this informative documentary.

Lloyd Kaufman is back again with more hours of footage, all to the benefit of…… showing the world how its done. His humor and personal character traits are highlights to this multi collection of clips culminating in a huge behind the scenes extravaganza.

Troma has certainly been at the heart of horror and film making from the start with its goofy productions, horrific imagery and off beat nature that made each product it released, an original piece. This time it’s Lloyd who is being directed and asking the productions how its done. He explores the subject matter of finding money, getting a crew together, picking out actors and asking the questions on why and how.

Several special effect scenes are captured in combination with how its done from several film making projects. What is great here is that almost every production shown falls way outside the comforts of big budget studio productions. It goes from homemade, to shoestring budget to independent to of course the kind of films that Darren Bousman is involved with .

The footage is kept causal and humor with Lloyd just being himself in a variety of roles. This collection is kept moving, kept interesting and kept insane. Greats such as Herschell Gordon Lewis are caught on camera as he gives us first hand advice about the business. We stop in with Greg Lamberson on Slime City Massacre who is mid green screen at a local in Buffalo New York. We get some technical background thrown at us, but at essence is the showing of how its done, how its films and light and how the final piece ends up looking. This in itself is a great part of this 2 DVD set that most likely had to wait till they could gather up all the finished shots for its release.

You’ll get to see behind the scenes from production such as “Nun of That“, “Killed on the Fourth of July”, “Mother’s Day” (remake) and several others.

The set comes with 2 DVD’s, the 2nd of which features exclusive interview with some of the top directors and filmmakers in the industry. Lloyd Kaufman personally visits David Cronenberg, Trent Hagga, Joe Dante, Steven Paul, Roger Corman, Mick Garris, James Gunn, Avi Lerner and several others who on camera run thru their careers and process on getting a film made.

Whether it’s stories from the early days of picking up a camera to present of which entails shopping at film buyer conventions,  it all spells out the details of how to get a film going. Some profess more humble beginnings while others make suggestions and offer present day tips. Even the Internet movement is brought into question and how to optimize your film campaign. This is great material which meets the intention of this whole DVD set. Any filmmaker from any industry (or genre) can benefit from the tips and knowledge shared. As Steven Paul puts it, it doesn’t matter whether it’s independent or a studio project as many of the steps are done the same. It’s just the levels of financing, rights, and end product that differs.

As I was watching this, this same mental note ran thru my head. The tapes are timeless and the advice priceless.

I believe all interested filmmaker will love this lighthearted release. It by no means is short of length with 600 minutes worth of material. The average viewer can probably span this over several weekends. Though the way its broken up, you can enjoy 20 minute pieces till moving to the next.

The release is a visual follow up to the fantastic book by the same name. The world asked how its done and Lloyd Huffman answered back with ….here ya go!