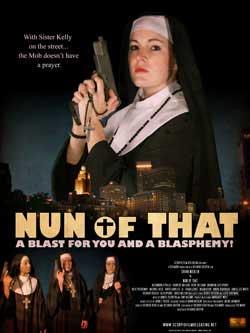 Sister Kelly (Sarah Nicklin) isn’t your typical nun. She has a temper, a foul mouth, and since she knows how to fight she doesn’t have any trouble taking care of herself (and killing people if she has to). After she is shot to death in an alley she goes to Heaven where she meets Jesus and is recruited into the Order of the Black Habit, a group of assassins who just happen to be nuns as well. Once she is trained by Gandhi and Moses (seriously) she is sent back to Earth where she is dubbed “Sister Wrath” and given the daunting task of taking down a dangerous crime family led by the bizarre Momma Rizzo.

“Nun of That” was a fun little movie that had a very Troma-like feel to it (and even had an appearance from Lloyd Kaufman himself toward the end). I found it to be original, entertaining, and funny as hell. There was just something about it that I really liked and in my humble opinion it is one of the best movies of its kind to come along in a while.

I dug it because of its quirkiness and because of the bizarre, out there plot. How many movies out there can boast that they feature a group of crime fighting nuns who deal with the bad guys in a brutal, Punisher-like fashion? I think that the idea is brilliant and I salute the filmmakers for coming up with it (who knew that nuns could be so cool and hardcore violent?).

The cast is great and even though none of them (or should that be nun of them?) is going to win an Oscar anytime soon they still do a terrific job (besides that, who cares about the Oscars anyway? They are meaningless if you ask me). Sarah Nicklin shines as Sister Kelly and does a bang up job playing the tough as nails, take no sh*t from anyone nun who has a hair trigger and just a bad attitude in general (plus she’s nice to look at as well, I must add). I also liked Sister Pride (Alexandra Cipolla) who is fantastic as the lesbian nun who has a fling with Sister Kelly. She is an attractive woman and there is just something cute about her playing Kelly’s love interest (plus those socks she wears crack me up). I also have to mention Michael Reed, who is a riot in his portrayal of the coolest Jesus you’ll ever see on film (plus he is great as Satan as well). If you don’t blink you’ll also catch a glimpse of the always excellent Debbie Rochon in the role of Mother Superior.

The villains of “Nun of That” are a load of fun as well. Rich Tretheway is a hoot as Momma Rizzo as are her “sons” (especially “Lucky” who never seems to quite live up to his nickname). My favorite of all the bad guys though, was without a doubt Viper Goldstein (David Lavallee Jr.), the Jewish hitman who is a total badass who uses Star of David throwing stars. He is a great character and I think that he owns every single scene that he is in (and if you ever run across him, never, ever make any sort of anti-semitic comments in his presence as I assure you he will make you regret it).

One of the things that I enjoyed most about this movie was the fact that it never took itself too seriously. Even though there is a ton of violence and gore the tone remains pretty light and it is obvious that everyone involved had a blast on set. It doesn’t try too hard to be funny like some movies do, and as a result it is genuinely funny.

“Nun of That” may not be for everyone, but I really liked it. It had everything required to make a good movie such as over the top violence, nudity (though sadly we never get to see Sister Kelly in any form of undress), humor, and enough profanity to make Andrew “Dice” Clay proud (Wow, my first-and probably only ever-reference to Andrew Clay). I will warn you though, there is some poking fun at religious beliefs so if you are offended by this I don’t think this film is for you. If you are in the mood for something a little different that will make you laugh then give “Nun of That” a try.

Tags Nun of That