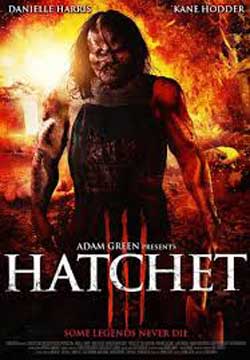 A search and recovery team heads into the haunted swamp to pick up the pieces and Marybeth learns the secret to ending the voodoo curse that has left Victor Crowley haunting and terrorizing Honey Island Swamp for decades.

The last time we saw Victor Crowley he had a problem with his face, it was blasted away! That was how “HATCHET II” had ended, with Marybeth (Danielle Harris) having shot off Victor’s mug in a most gruesome fashion. Victor Crowley was stone cold dead after that wasn’t he? Of course he wasn’t, don’t you guys know anything about unstoppable psychotic murderers in america? It takes a hell of a lot more than not having a face to keep em’ down in this country, just ask Jason Voorhees, Fred Krueger or Michael Myers (Carpenter’s Myers not Zombie’s). 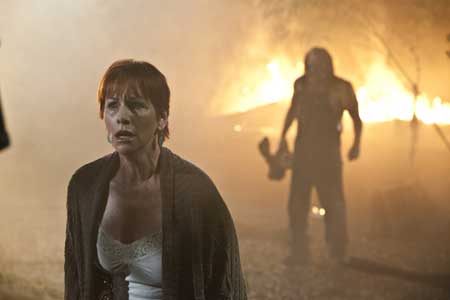 “HATCHET III” picks up exactly where “HATCHET II” left off, with Marybeth taking care of Victor’s kisser and thinking it was all over. But it’s never really over is it? And Victor just picks his faceless ass right up and goes after her again (How he sees her without eyes is something that doesn’t really matter apparently). After a brief struggle Marybeth manages to grab hold of a chainsaw and basically saws poor ole’ Victor in half, He’s gotta be dead now doesn’t he? It sure looks that way and Marybeth travels back from Honey Island Swamp to the local police station where, covered head to toe in blood, declares “I killed him” to anyone within earshot. She’s immediately cuffed and locked away by Sheriff Fowler (Zach Galligan) and after telling her story to him he has a squad of men go to the remote swamp to search for dead bodies. When they arrive they not only find a slew of horribly mutilated corpses, they find Victor…still dead! Maybe she finally got it right this time, maybe cutting Victor in half did the trick. I mean how can two halves of a dead body put themselves back together again? 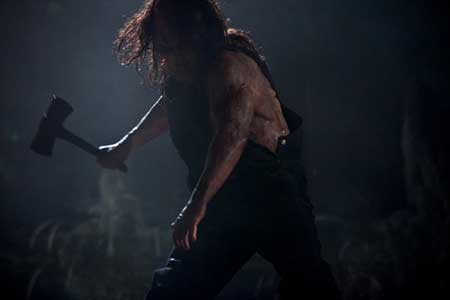 Marybeth is still the prime suspect in the murders although it’s noted that she’s way too tiny to have slaughtered a literal squadron of men. But she acknowledges that she was on the island and she did arrive at the police station covered in blood, claiming she killed at least one person. Who’s to say she couldn’t have killed everyone? Amanda that’s who! Arriving shortly after Marybeth is incarcerated, Amanda (Caroline Williams), is a former newspaper reporter now working on a book about the legend of Victor Crowley and she claims to have knowledge of how to finish him once and for all because he ain’t dead yet. Amanda also happens to be Sheriff Fowler’s wife and he doesn’t believe any of her malarkey regarding the legend of Crowley. He (and most everyone else) believe him to be nothing but a legend, but Amanda knows better and after some cajoling with Deputy Winslow (Robert Diago Doqui) she manages to bail Marybeth out and go to the one person who has what’s needed to put Victor away once and for all. And if you’re wondering where Sheriff Fowler is while all of this is going on, he’s on the way to Honey Island Swamp to find out why he’s lost contact with his men. And as expected, Crowley is indeed back in one piece because, according to Amanda, he cannot be stopped until they recover the remains of his father and return them to him. Only then will Victor Crowley put down his hatchet (Or whatever other weapon he happens to be holding) and remain dead. But the owner of those remains isn’t too keen on letting them go just yet.

From this point on “HATCHET III” becomes exactly what you expect it to be, a way over the top gorefest with some of the grisliest kills of the entire series. Characters get their limbs ripped off, heads smashed, shot, skewered & electrocuted with gleeful abandon and while there isn’t a kill as inventive as Tony Todd’s in “HATCHET II” there are a few here that come mighty close. The special effects makeup (By Robert & Shaun Pendergraft) is stylish enough but there were a few gags that looked a little cheap to these eyes although they didn’t detract from the happiness I was experiencing as I watched some serious slaughter going on. 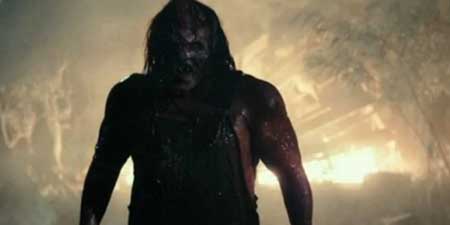 All of the actors here know exactly what they’re in for and they all perform admirably. Caroline Williams is a hoot as Amanda and she gives the role just enough sass to endear her to the audience. Zach Galligan forgets to use his southern accent every so often and his face is way too earnest (Aside from a touch of grey he looks exactly like he did in 1984’s “GREMLINS”) but he gives a good performance here as well. Sid Haig has a terrific time chewing up some scenery in a cameo as a racist dumbass with bad hearing and Derek Mears plays the leader of the squad that goes after Victor with a hard as nails veneer that helps to make the big fight scene his character has with the one and only Kane Hodder (Returning as Victor Crowley) very effective, if a bit short. For the few of you that aren’t aware of it, Mears played Jason Voorhees in the “FRIDAY THE 13th” reboot so when the two of them meet in the film it’s old Jason (Hodder) vs. new Jason (Mears)! There’s even a quick cameo from “HATCHET” alumni Joel David Moore that made me chuckle. Danielle Harris’ middle name must be “Spunky” because she’s all of that and a side of fries as Marybeth. She’s tough but soft at the same time, you just wanna pick her up and squeeze her but if you did she’s probably shoot you between the eyes. My kind of girl… 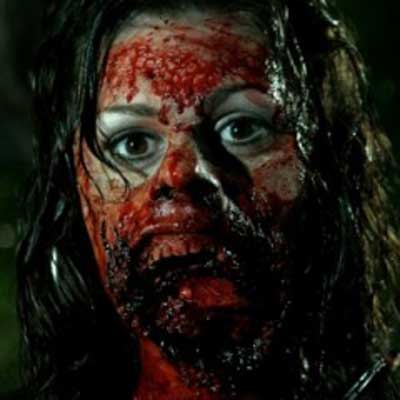 Adam Green returns as both the writer/producer of the film and his script doesn’t deviate too much from the formula. It does have a self referential tone to it that provides a few laughs though, especially in a scene that takes place in the jail cell where Green has a cameo (As a drunk) who overhears the sheriff scoff at the whole Crowley story. But Green doesn’t return to the director’s chair this time out, he leaves the directing duties to camera operator supreme B.J. McDonnell and you’d never know that it was his first time in the director’s seat since “HATCHET III” moves at a breakneck pace that might be beyond the skill of a novice director to handle. 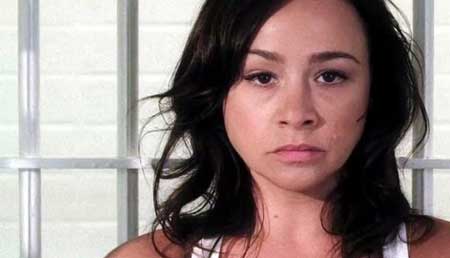 But that doesn’t mean all is well here either. I was surprised at how ugly the film looked, especially in the outdoor scenes. There’s a very low tech grain to those scenes that cheapen the proceedings a bit and I found that to be unacceptable in this day and age, especially if the film is getting a theatrical release. Add that to some of the practical EFX work that looked a bit dodgy and you might have a recipe for disaster but the film rises above these issues for the most part because it moves so gosh darn fast. As a matter of fact it moves so fast that it ends about as abruptly as a film could possibly end. Some of you will hate it, some will love it and some of you won’t care because it’s in the tradition of the “HATCHET” series to end this way. Additionally, I didn’t find the film the least bit scary but I am The Black Saint y’know…it’s tough to put a scare in me (“THE EXORCIST” not withstanding). 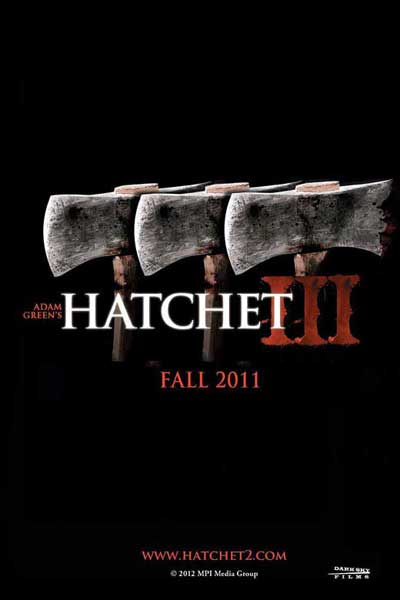 “HATCHET III” wants nothing more than to please fans of the original and in that aspect it succeeds wildly. The big question is will it bring any new fans into the fold? I’m no prognosticator but I don’t really think it will. It’s too vested in it’s mythology and newbies will be confused as to why any of this is going on but fans of the series will be more than happy with it’s third entry. Will there be a fourth “HATCHET” film in the future? I can’t say but if there isn’t then I can safely say that the series goes out with a bang! Or did it…..?