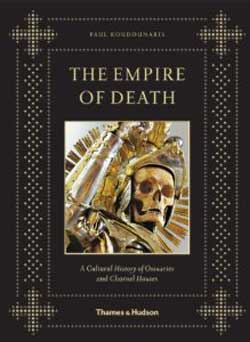 The Empire of Death: A Cultural History of Ossuaries and Charnel Houses

“The Empire of Death”, is quite an achievement. First off before we get into the book itself, “The Empire of Death”” in my opinion represents the example of a perfect book. It’s $50 price tag may seem intimidating but what you get is a hardbound edition with full color photographs, fine illustrative work and historical data that most will never take the time to research. The book contains a thorough overview of death and the odd displays of bones and skulls that decor some of the world’s most traveled countries.

The photos are shocking but at the same time surreal in the mass qualities of skeletal remains collections that adorn buildings, cathedrals, hallways, shrines, Tombs , charnels and Chapels. Author Paul Koudounaris has put together this amazing effort which is produced by the book artisans of ThamesandHudson. Black cover, red ribbon bookmark inclusion, 224 pages and rich with content and photography…The edition could have stood alone as “just” a photography book, however Paul took it another step by filling it rich with research about the odd customs of death and the deceased.

Many will scratch their heads for such macabre displays that resemble what you might find in a serial killers basement, but we probably didn’t know about what the extent the customs that death has held for foreign countries abroad. We are taken back into the time of the 19th century when the passing on one’s body meant that the spirit had passed and the remains should be honored.

Many from this time took a different approach to death. Using the bones and skull fragments, these deceased became literal works of arts with thousands of remains being intricately sealed to create entire sanctums of death and dying. Some even took it as far as creating sculptural mannequins of sort wearing clothing from cultural backgrounds. A flip thru this book will reveal much of what I am referring to. A visit to these locations would most likely overwhelm visitors with the symbolism and care taken into preserving the final images of the dead.

In one picture originating out of Germany, a neatly stacked pile features the bone remains of over 200,000. The countries that are featured take us from Egypt, Cambodia, France, Peru, Italy, Germany, Serbia, Spain and several others that honor this gloomy approach to decorative sanctions.

We are told about chapels of worship and catacombs that perceive the dead as images of hope into the afterlife rather than the western view of dying and our final moments. In fact, countries have often given tribute to death thru these means which reinforce the belief that the living is only one state of existence and that death represents moving on to the next level, one rich with after life and experience. In reading we learn that the old would often bring the young to honor their ancestors who have passed on. This odd book even with its macabre works of color and photographic magnificence will certainly find and deserve a place on shelves as the ultimate coffee table book or reference collective for many to gaze upon the oddities of our world. Paul Koudounaris has created a fantastic piece of work that sings of passion, detail and purpose. Religion or not, this is an ultimate tribute to the art of the dead.