MVD brings ‘Hell of Earth’ with a batch of ‘Deadly Spawn’ 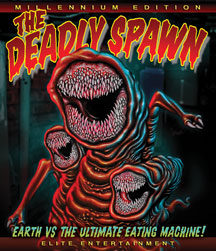 The cult classic film The Deadly Spawn will see a “Millennium Edition” debut on Blu-ray this January 24th courtesy of Elite Entertainment. The company will also release Hell on Earth – the latest release from the creators of The Deadly Spawn – on DVD the same day.

In The Deadly Spawn, two campers in the New Jersey woods have their outdoor fun interrupted by the arrival of a meteorite crashing nearby. They go to investigate the crater, but are suddenly attacked and devoured by alien parasites who have hitched a ride to Earth. After finishing off the campers, the hungry space monsters head for a nearby town, where they make their domain in the basement of an old house and soon begin polishing off one hapless inhabitant after another. Four young teenagers, plus one pre-teen boy, try to find a way to stop the angry space monsters before they reproduce and literally eat humanity. 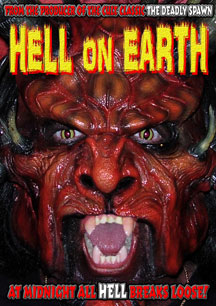 In Hell on Earth, Seventeen year old Bobby, walks with the help of metal leg braces and lives with his nasty parents and repulsive sister, Peggy. He plays with “imaginary friends” provided by the mysterious and ancient “Apocryphal Book of Tarkuhm” provided by his eccentric and somewhat crazy Aunt Sadie. What he does not know is that the monsters and demons are only biding their time until the planets are aligned and they can get him to read the passage freeing their master from the “Hell” of another universe.