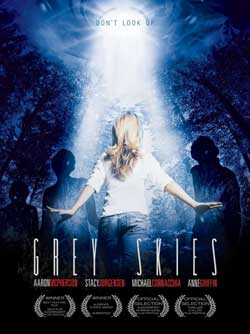 A group of old college friends reunite to relive their glory days by renting a beautiful cabin in the woods. As the sun sets on their first day in the cabin, bright flashes of light announce the arrival of mysterious creatures. These friends will have to outwit a force that is both inhuman and extremely intelligent in order to survive. The outcome will shock and amaze you as we come to realize… we are not alone in the universe.

“Grey Skies”, and no, I don’t know why it’s spelled in British English, is a movie that is split in its identity. What starts out as a character piece, and a poorly constructed one at that, turns into quick alien abductions in order to control their victims. The connection between the two is loose and vague. 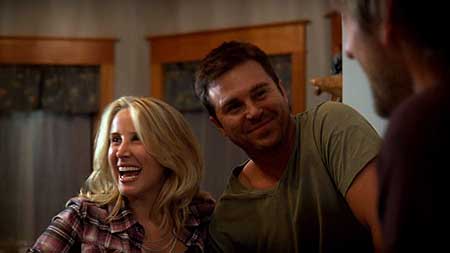 Some old friends meet annually and this time one of them has chosen a remote house separated from the rest of society. As they arrive they catch up and we are introduced to the new faces of the group. Their banter is banal and only serves to give basic plot information, which proves useless, and marginal character development. Actually the movie starts at the same house with a different couple as they are somehow abducted, in an oddly sexual manner, but are never seen from again. I guess they just wanted to make sure we know this is about aliens. When the aliens begin ‘abducting’ the group of friends everything turns to hysterics as they run around without much purpose. 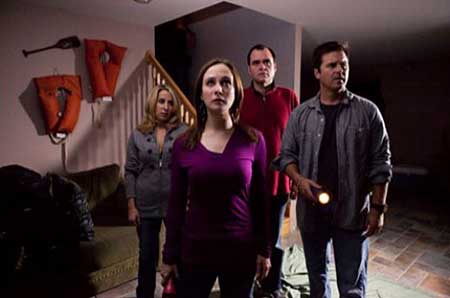 I appreciate the attempt at developing good depth at character and meaningful relationships between everyone but I won’t belabor trite clichés about being close since this particular attempt isn’t even that. The friendships are loosely explained at best, I think they’re college buddies, and most of what there is comes across as awkward. It’s as if there’s a dirty secret between them all, and there is but that gets revealed later so that’s not it, and no one is quite sure what to say. Despite any progress that is made in the character department, once the second half starts rolling in then none of it seems to matter. As each of the friends gets ‘caught’ by the aliens the rest grow increasingly worried and frightened. Our group proves to be of little use against the alien tactics and can’t fathom the strange occurrences that are happening to them. 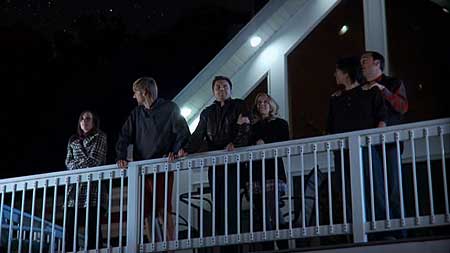 The directing started out with a slight glimmer of promise, or more accurately, with some eye towards interesting camera angles and well framed shots but these soon disappeared. Instead of using these types of shots to create greater mood and style through the third act these conventions were unceremoniously dropped and a more pedestrian directing style prevailed through the end of the movie. What had a possibility of being interesting falls into something far more distracted and sloppy. 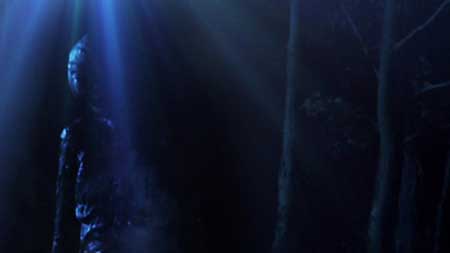 The aliens themselves kept mostly to the shadows for a creepier effect that failed to creep. With all pretenses at whom the characters are and having any meaning to what’s going on dropped, they run back and forth, in and out of the house and they are chased by aliens in shadows. Aliens that seem to like stomping around upstairs but since no one goes up there, there isn’t much point. In point of fact, the stomping is about the best part of the sound design as one can actually tell where it’s coming from. Throughout the aliens make a distinct noise but it’s never placed well and sounds as if they’re all chewing upon wet gravel. Though it’s never understood why or what they are, the aliens do have nefarious plans afoot. I guess they’ll save that for a sequel I hope to not see in the near future. 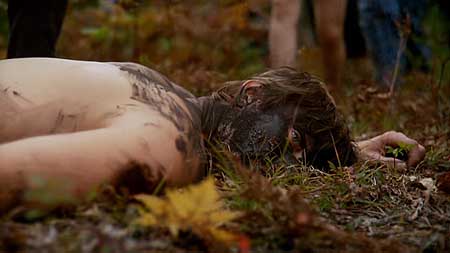 What started as promising didn’t carry through and it’s a shame that the positives were left in the opening of the movie rather than being nurtured to grow and bring the audience along with the journey. The was a great possibility of developing meaningful characters and have that meaning prove useful in the end but the ball was certainly dropped on that. While “Grey Skies” lacked a singular identity, the problem might have been solved by a bit more gestation on developing the script and tying in the characters to the alien attack. A little more time might have meant the world. 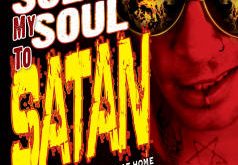