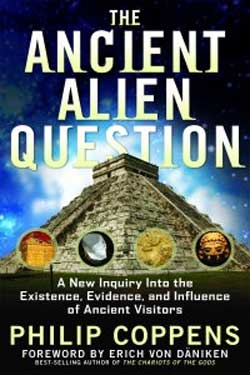 If you are a fan of Zacharia Sitchin, Erich von Däniken, or Carl Sagan, just to name a few, then this book is for you. Carrying on their work, and bringing us a bit more up to date in the wake of the “Ancient Aliens” series on the History channel, Philip Coppens recounts his travels and studies around a subject he takes very seriously. Coppens is a leading contributor to the series, which has become quite popular.

The evidence has been mounting over the years as we study more and more history. Archaeologists have uncovered some amazing similarities in various cultures across the world –ancient cultures– that did not have the means to communicate and travel the way we do today. Yet so many of them were building pyramids and other grand structures that remain a mystery– even to this day!

From Egyptian pyramids to the stones at Carnac, ancient Indian flying machines and Mayan crystal skulls to the Sacred Valley of the Amazon which features such sites as Sacsayhuaman and Macchu Picchu, we are shown a plethora of evidence that ties all of these cultures together, and in many cases only increases the number of questions we have about how and why many of these places were constructed. Whether they were from off-planet or the legendary “Atlantis”, clearly there were “others” with advanced technology influencing ancient tribes and civilizations with what is obviously very similar information and techniques!
Coppens also touches on subjects like “Life on Mars”, “Alien Probes” (life seeds, not the anal kind!) and “Alien DNA tampering” or what I like to call “inter-breeding” and most people just call “sex”. If this other culture/race (alien or not) was enslaving humanity, it’s safe to bet they were probably having sex with humans. Many ancient writings speak of just such “gods” finding the earth women irresistible. Even in the Bible! Coppens makes sure to include the Bible and other religious texts in his research.

One thing I was disappointed to see however, is a complete lack of material, nay, nary even a brief mention of Crop Circles. I feel the author is really missing a piece of the puzzle here, and I couldn’t help thinking about the Chilbolton “Arecibo Message” Formation, when I was reading the section about the original “Arecibo Message” sent in 1974 by Carl Sagan and Frank Drake. Basically it was a “message to anyone out there” beamed into deep space, containing very specific binary coded information about mathematics, some basic elements, the solar system, human DNA and more.

The author fails to mention that allegedly, we received an answer to this message, coded in the EXACT same format some 27 years later in a crop circle formation! This, according to the article here: www.cropcircleresearch.com/articles/arecibo.html ..so I was surprised that Coppens either hasn’t heard about this or gives it no credence if he has.

Interestingly enough, after spewing out all the evidence, he ends the book saying “The key here is the consensus reality: what we all agree to believe. It is a basic human right that any individual has the freedom to believe what he or she wants. And so it is my hope–my wish–that in these pages, I have laid to the nature and complexity of the Ancient Alien Question in such a way that you have the necessary building blocks that will allow you to decide whether you believe.” Sigh. Kind of sounds like a cop-out (pardon the pun). He’s just not very assertive at the end here.. basically just telling us it’s all a big maybe and I hope you believe. I guess if he were more sure of himself he wouldn’t have put “Question” in the title.

If you’re wanting to fill in the blanks on some of things you’ve heard about or seen on the History channel, then this is a great book. If you are really looking for the most comprehensive and up-to-date theories and evidence along with compelling scientific reasoning that ties it all together, you might be a bit disappointed.