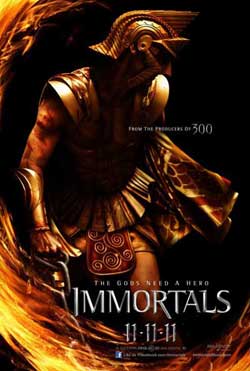 Theseus is a mortal man chosen by Zeus to lead the fight against the ruthless King Hyperion, who is on a rampage across Greece to obtain a weapon that can destroy humanity.

Director Tarsem Singh has garnered quite the rep for himself in Hollywood despite having made only two films. Those two films (The Cell & The Fall) both met with some critical success but what really got the critics all flustered were the spectacular visuals that both films were comprised of. “The Fall” especially had visuals that made jaws hit the floor. Sadly, neither one of them had much of a storyline to follow. But he is well known for his visual style & he has a sizable following because of this. 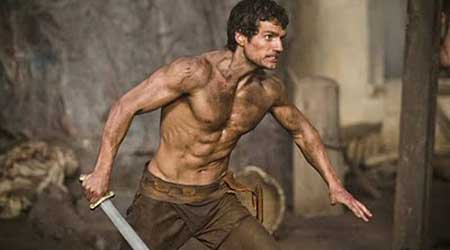 His third film “Immortals” is already better than his first two because it has a cohesive plot to go with it’s amazing visuals. That’s something that his previous films really didn’t have much of. The story is simple: A mortal by the name of Theseus (New Superman Henry Cavill) has been chosen by Zeus to spearhead the fight against King Hyperion (Mickey Roarke). Hyperion is seeking the Epirus Bow, a weapon that was created by Ares & has the power to release the dreaded Titans. The titans are extremely upset at being banished to Mount Tartaros by Zeus ages ago & they want nothing more than revenge on the gods for imprisoning them. if they are released nothing will stop them from attacking Zeus & the other gods, mankind be damned. Unfortunately, ancient rules dictate that the gods cannot interfere in any conflict concerning man. Hence, they chose Theseus to lead the fight against Hyperion, with the fate of the Earth in the balance. 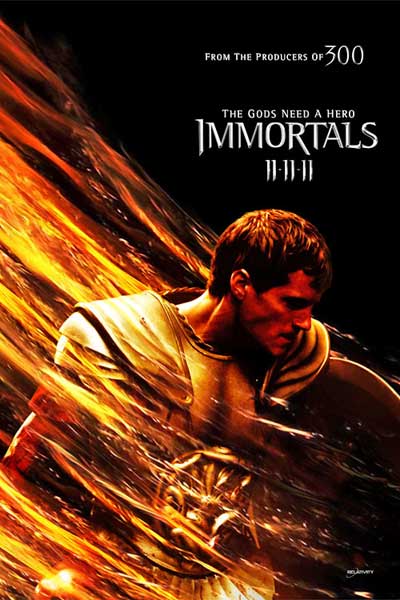 Along the way, Theseus picks up a couple of partners to help him in his quest, Stavros (Stephen Dorff) & Phaedra (Freida Pinto). Stavros is a small man but a ferocious fighter & Phaedra is an Oracle who has told Theseus that he will be a key component in the battle between Hyperion & the gods. But nothing can happen until the famed bow can be recovered. Much like “The Sword In The Stone”, it’s imbedded in a large boulder & only Theseus can pull it out (A pretty good scene save for the fact that the boulder comes apart way too cleanly to look realistic). Once Theseus has the bow the real battle begins. If you’ve seen the trailers for the film you already know that the bow is seemingly made of light & can fire multiple glowing arrows at one time. and it never misses it’s target(s). It’s exciting to see the bow come into play whenever Theseus uses it as it’s a pretty cool special effect & it produces some spectacular deaths.

Of course, Theseus ends up losing the bow to Hyperion & has to recover it before he can release the titans. But I really don’t have to tell you much more about the plot here do I? One of the problems with the way movies are advertised nowadays is that you can pretty much figure out the plot plays out just from paying close attention to trailers. When “Shutter Island” was released I knew exactly what the film was about & how it would end just from watching the trailer. I never read the book either, just in case those are the next words to come out of your mouths. It was just obvious to me & I was proven correct. I still haven’t seen that movie because in my mind I’d seen it already. “Immortals” is much the same, you can figure it all out from the trailer. So what’s left? The acting & the visuals… 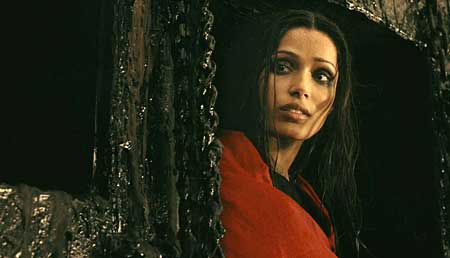 The estimated budget for “Immortals” is $75 million dollars. This is by far the most money Singh has had to work with in the past & he makes the most of it. Whether or not you like the film there is no denying that every frame of it is absolutely sumptuous. It’s the best looking movie of the year by far. Singh knows exactly where the camera should be, where the actors should stand & how the CGI effects will fit into the scene to get the biggest bang out of it. He’s like a master painter, using his paint brushes to create works of cinematic art. And make no mistake, this is an art film dressed up as an action adventure. That’s where some of my problems with the film lie. 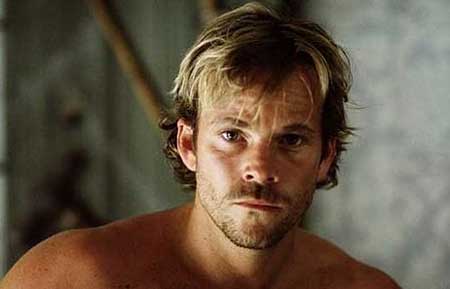 Not much happens during the first 60 minutes or so of the movie. I mean we get the gist of the plot & all but it seems to drag on for a lot longer than it actually was. Of course during this first hour we see some spectacular visions & we get some sporadic action tossed about to keep us on our toes but a bit of judicious editing would’ve helped here. I got the impression that Singh just wanted to show off his considerable talents here & while he does show us what he can do with a bigger budget visually, the story suffers a bit because he’s just having too much fun dazzling us with the look of the film. Cavill performs admirably in the role of Theseus & looking at his chin I can see why he was chosen to be the new Superman. He’s also in hella good shape as well so it looks like he can take on King Hyperion’s massive army singlehandedly. Dorff is good as well but there seemed to be a bit of a contemporary air about him. He reads his lines as if he’s from the lower East side of Manhattan, not as a man of the time where the film takes place. That being said, he seems to be having a lot of fun with the part. Freida Pinto is here mostly as eye candy, but she is absolutely luminous to look at. And if that is her butt we see during the one nude scene in the film then she might just have the most perfectly shaped ass of any woman in the world. She is just plain freaking gorgeous to look at but she isn’t asked to do much here. And I had a problem with a plot detail involving her as well but I’ll let you guys suss that out for yourselves. Mickey Roarke has the gravitas to play the role of Hyperion but it seems to me that he mumbles a lot of his lines and I had a hard time hearing what he said. But physically he fits the role to a tee & he conveys menace & anger most convincingly. 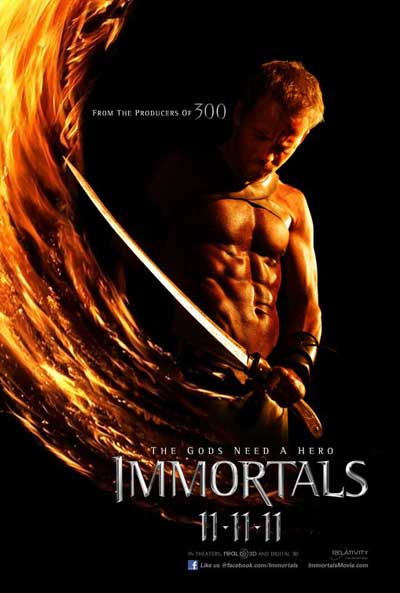 All of the actors who play the gods are up to snuff but I couldn’t buy Luke Evans as Zeus although he essays the role well. I just always see Zeus as an older man like Olivier in the original “Clash Of The Titans”. Not as a young warrior type as he is portrayed here. That’s just a personal hang up though, it doesn’t take anything away from his performance or the film. My biggest gripe actually has to do with the last 30 minutes or so of the film which is the most savage & exciting part of it all. Firsly, as much confidence Zeus & the gods have put into Theseus there’s just no f*cking way he could’ve made his way through the thousands of soldiers attacking him & Stavros. I know it’s a movie but come on!! The two of them are literally engulfed by Hyperion’s army but they hack & slash their way through it with some minor cuts & nothing more, I just didn’t buy that. Secondly, when the Titans are released (Come on, you know they’re gonna get released) I was expecting them to be….TITANS. Big, ugly & angry beings, things that would make me understand why the gods banished them in the first place. Instead what we get are ordinary looking men with grey, ashy skin & helmets who are ferocious fighters indeed but hardly what I would call Titans. But the final confrontation between the gods & the titans is one of the goriest fight scenes I’ve ever witnessed in a major Hollywood release. It is literally drenched in the red stuff & it’s a marvel to watch as well. The fight choreography is stunning here & all involved pull it off with amazing grace & style considering the fact that heads are literally being smashed into pulp…in 3D no less! 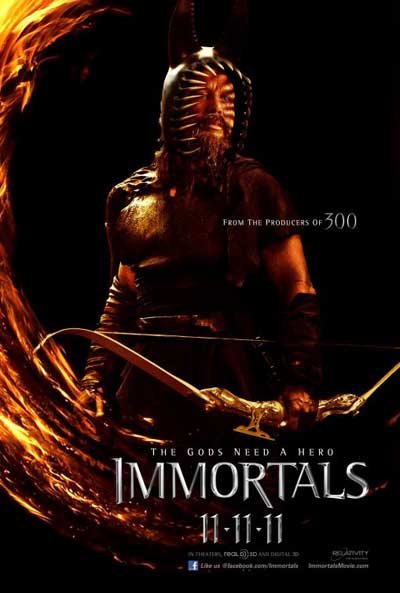 Speaking of 3D, Singh has shown how to really get the most out of the process with “Immortals” there are a few scenes with stuff coming out of the screen but the visuals combined with the 3D make such a perfect combination on screen that I couldn’t help but be blown away at the lavishness of it all. Besides “Avatar” this is the best use of 3D I’ve ever seen in a film. Actually it’s better than “Avatar’ because Cameron doesn’t have the visual flair that Singh does (Yeah, that’s right. I said it). If you can see it in 3D then you must but it’s still a marvelous looking film in 2D as well. 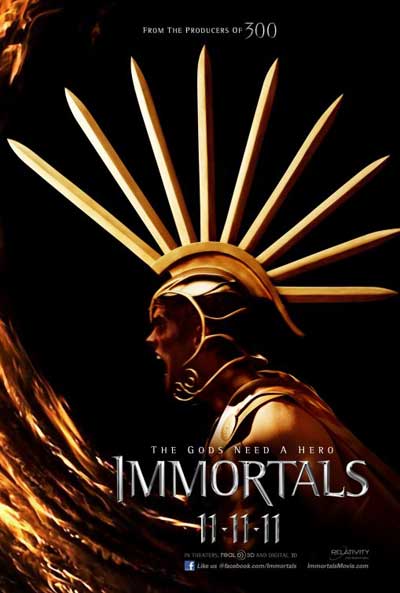 The film is going to draw comparisons to “300” & that’s understandable. I feel that “300” is a bit superior because it had a more cohesive plot to it. Certain plot thread simply vanish in “Immortals” never to be seen again which seems to happen a lot in big budget movies as of late. it’s as if a conscious effort is made to jettison certain threads before they’re finished just to get to the action quicker. “300” also had a very unique look to it as well. Not as gorgeous as “Immortals’ but then again I don’t think it was meant to look pretty. “Immortals” has some of the same ideas regarding it’s battle scenes but they all look “Prettier” for lack of a better word. Even the Gods Vs. Titans battle looked lovely despite the fact that blood is flying everywhere. 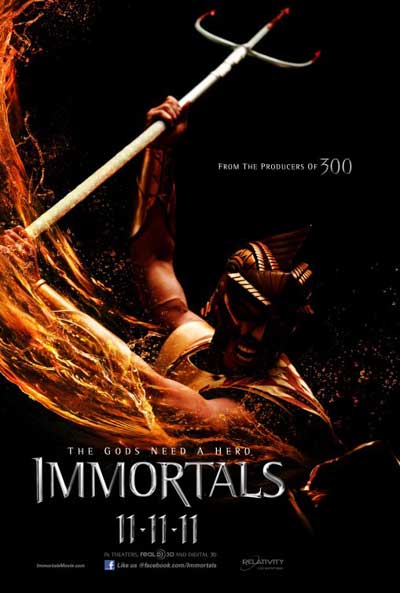 All in all I can give “Immortals” 3 out of 5 shrouds. It is, as I said earlier, the best looking film of the year by far & despite a slow beginning It does reward our patience with a rousing battle at the end. There are some script problems for sure & I’m still not convinced that Rourke wasn’t mumbling most of his lines but overall I can recommend you see it. But try to spend the few extra ducats & see it in 3D if you can. It really is something to see in this format.