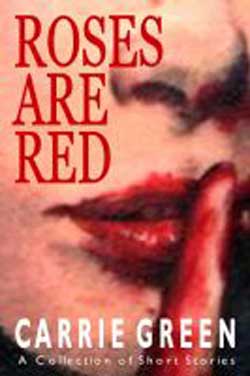 Think of the phrase “Roses are red“. Chances are trite declarations and gestures of love will immediately come to mind. Carrie Green’s short story collection Roses are Red, however, is as far from a romantic trifle as you can get. These three stories explore the darker side of mankind, with selfishness and deception among Green’s main themes. The lineup of Red is as follows:

-A Long Distance Relationship. Allan Gunther and his girlfriend Margaret get into an argument. An enraged Allan kills Margaret and flees their apartment building. He’s convinced Margaret’s death means things are back under control, but he begins to have doubts that Margaret is truly dead. Calling the apartment and hearing her breathe probably didn’t help matters . . . assuming that was Margaret he heard. Relationship is the weakest story in the collection. The ambiguity over Allan’s mental state offers intrigue, but it comes too late in the story to really matter. Most of the tale consists of Allan’s surroundings and thoughts after Margaret’s death. It’s mostly a crime story with some horror aspects creeping up in the conclusion. If Green expanded the tale and included more plot, Relationship would have greatly improved.

-A Lucky Human. Green tries her hand at the science-fiction genre with this story of a young musician who secures a job on a noteworthy galaxy tour. He’s convinced his talent won the tour’s captain over, but he learns of the captain’s darker intentions as they spend time together on tour. This was my favorite in the collection, partly due to Green’s worldbuilding abilities. Her story lacks a specific timeframe, but the technology and other traits establish an obviously futuristic setting. We learn that computers have evolved so much they can now think and feel emotions. Love is among those emotions, which is fine for the computer but not for its human partner. Her description of the future also includes minor (but interesting) details such as humans spraying themselves certain colors. Rather than bog the story down with detail upon detail about the setting, Green includes just enough facts to raise readers’ curiosities. Human also benefits from an unpredictable plot and an ending that had me alternately disturbed and laughing at the twists of fate befalling its characters.

-Cash Only. Without giving away too many spoilers, Cash is a “Dexter”-esque tale of a man who preys upon criminals. Gene sees a thief named Maria in a bar and convinces her to talk to him. Maria, convinced Gene actually cares about her, proceeds to confess everything. Maria’s partly right: Gene does care about her, but for a different reason than she suspects. This story raises many questions: Who is Gene? Why does he hunt criminals? Does he have supernatural abilities? None will be answered, but that’s okay. Part of the fun is using your imagination and creating your own solutions to the story’s mysteries. Unlike Relationship and its (seemingly) accidental incompleteness, the murkiness surrounding Cash works.

Carrie Green shows promise. She’s a skilled storyteller who knows how to keep her readers interested. I found myself thinking about the stories and the questions they raised long after I had completed them. I even found myself wishing she included more stories in this collection. That said, her prose style needs work. It can seem plain and lacking in the dark elegance of, say, Anne Rice or Caitlin R. Kiernan. I also caught several typos/grammatical errors. Green (or her editor) would do well to carefully edit in the future.