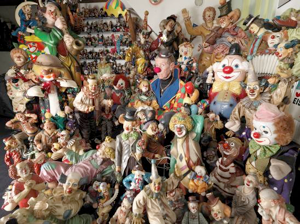 I’m not sure what would be more unsettling, a room full of dolls staring at you everynight or clowns? I’m guessing this lady has been dealing with that thought for quite some time.

Per press release from Guiness:

For many people, the idea of going to sleep in a room full of clowns would be the stuff of nightmares, but not for 61 year-old Ortrud Kastaun from Germany! Ortrud has been recognised for the first time in the Guinness World Records 2012 book for having the Largest Collection of Clowns.

“German Ortrud Kastaun (61) will spend Halloween at home with her collection of 2,053 model clowns. Ortrud’s unsettling collection is featured in the new Guinness World Records 2012 out now”

Ortrud, known to her friends as ‘Orty’, has been collecting model clowns for over 15 years, and in that time amassed 2,053 different models. The collection is so large that Ortrud moved to a larger flat to accommodate them, and even set up her own museum at her home in Essen, Germany. Ortrud goes to sleep each evening with hundreds of clowns smiling back at her.

Ortrud, who is so passionate about clowns that she has one as a tattoo, admits that her friends find the collection unsettling: “My friends will often ask me if I find the clowns scary and I say ‘No’. I see the clowns as absolutely positive characters and as an aid to get over my alcoholism. I think my friends understand and respect my enthusiasm”.

The retired civil servant says that the clowns represent a transformation in her life. She uses the collection as an aid to help her recover from the alcoholism she suffered during in her younger years: “Fifteen years ago I was in a bad way. I was an alcoholic, in recovery receiving help. I remember being in therapy one day putting a jigsaw together. The image was of a clown in a jack-in-the-box. Something just clicked. From that I day on I begun collection clowns”

Ortrud Kastaun’s Largest Collection of Clowns appears in the Guinness World Records 2012 book, which is out now.