What’s up Fiend Club, it’s your humble narrator, Rob Delamorte, back from the dead to bring you even more evils coming to horror, and man, do I have some great stuff to tell you maniacs about this time around, including a report on AMC’s newest ghoulish gem.

First to keep you from losing your marbles in the hellish heat..movie news! News that will bring you wanted chills down your tanned, blistering spine.

First is After.Life starring Addam’s Family’s Christina Ricci, Justin Long of Drag Me To Hell, and of course, the great Liam Neeson, will soon be available to allow you to utilize your brain to its fullest capacity. 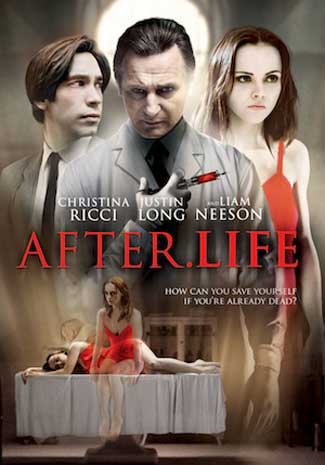 The psychological thriller directed by first time director..ready for it?..Agnieszka Wojtowicz-Voosloo, tells the story of a young woman caught between life and death after an accident, and a funeral director who appears to have the gift of transitioning the dead, but just might be intent on burying her alive. Is she a spirit?

Or is he just mad? Solve the puzzle when the dvd crosses over to shelves from Anchor Bay on August 3rd.

Universal Pictures has released a poster and teaser trailer for their next horror effort, Devil. The movie produced by M. Night Shymalan, director of the abysmal summer blockbuster, Last Airbender, has no real plot line that has been leaked, but from the looks of the trailer, this could very well be the side of Shymalan we’ve all hoped to see.

This supernatural thriller about a group of people locked in a possible express elevator to the bowels of hell will be released on September 14th. Push the button to evil when Devil is finally unleashed unto the world. I will give you more on this when it becomes available. 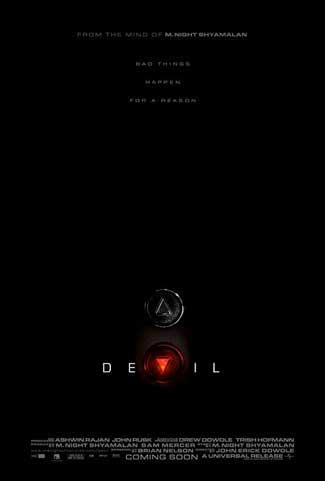 Finally, here’s some information from the fear-stival circuit. The Stephen R. Monroe Unrated remake of I Spit On Your Grave premiered at the week long Fan-Tasia Festival to mixed, but extremely high acclaim. As you probably already know, I Spit is based on the original 1978 cute and cuddl..naah, i’m sorry, vicious, and brutal exploitation film of the same name starring the great and totally believable, Camille Keaton. During the already infamous revenge scenes, audiences not only stood up and cheered, but highfived each other like a couple of high school jock d-bags! With scenes filled with the gore you crave, brain matter and other fluids will surely splash across the screen when the movie that holds no punches hits theaters from Anchor Bay on October 8th. 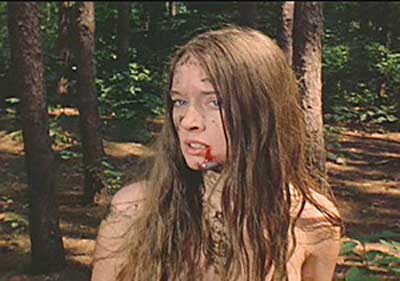 Looking for some terrifying new music to tear your eardrum to tear your eardrums apart? Well, I have the remedy to begin destroying your hearing, and sanity as well. First up, metal beasts Megadeth, Slayer, and Anthrax team up for American Carnage:Leg 2, the world’s biggest thrash tour to be announced in twenty years. The original 1991 Clash Of The Titan lineup will tour once again, and they all plan to rip up the classics when the tour kicks off September 24th at Verizon Wireless Theater in Dallas, and will also play twenty other dates. Megadeth will play their 1990 landmark album, Rust In Piece, from front to back, Slayer will play the full Seasons In The Abyss, also released in ’90. Also, to add more fuel for the fans’ excitement, Anthrax welcomes back front man, Joey Belladonna, who was the original vocalist recently welcomed back to the band. Be prepared to have your senses crushed when the tour steamrolls through a city near you this fall. Check the official tour website for full listing of concert dates, and locations. 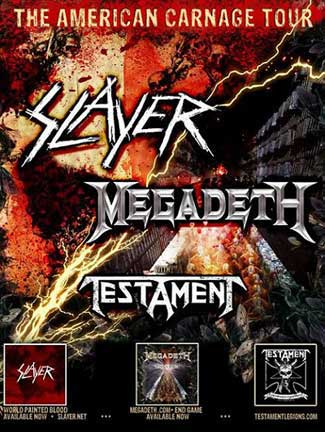 Last but certainly not least, some amazing new for fans of the boogeyman! Rob Zombie is presently in the studio with his new band lineup, working on new songs slated to be released at the end of summer. After releasing his devilishly delicious sequel, Hellbilly Deluxe 2, Zombie want to unleash the scary-sexy sounds of his new mates, including the recently inducted Joey Jordison of Slipknot, and his sickeningly rapid drumming style. Unleash the Superbeast at the end of August. More will be announced when information is given.

Looking for some more artistic visions of the terrifying? Well, there’s definitely comics soon available to soothe the savage artbeast in all of us.

First up, demon slayer and chronic smoker, John Constantine, will return to graphic form in Hellblazer:City Of Demons. This series is a five issue standalone featuring art by Joe The Barbarian artist, Sean Murphy. Constantine sends em’ all back to Hell when the first issue is released from Vertigo Comics this October.

Next, Dark Horse plans to release Let Me In, a four issue mini that includes back story, scenes, and also added characters. The miniseries is based on the acclaimed vampire girl meets novel and film, the Swedish, Let The Right One In, which of course has been Americanized by Hollywood. Although the author of the novel is not pleased with the move to the comic universe, the company will release the first part of the arc, which ties in with the remake, in late October.

Lastly, hopefully as you freaks know by now, I praise the greatest thing for your viewing displeasure with my ultimate award. So, the Delamorte Deadly Delight to watch out for is Ian Edgington’s award nominated, Victorian Undead, a special one-shot that will release on October 13th. The 13th..mmmwwahahaha! The Sherlock Holmes vs. zombie action continues from an earlier piece of the story where London is still recuperating from the destruction at the hands of evil genius, Moriarty’s, undead army. But a slew of recent murders leads Holmes and Watson to believe that a zombie has survived the quarantine..only to find out their manhunt will only lead them to the real butcher, Dr. Jekyll. Follow the master when the issue mysteriously appears on shelves in October. Will you like this book? Elementary!

Attempting to seek new nightmares in the form of a captivating novel? Here’s a selection that will ignite your imagination. Siren by John Everson, author of The 13th., involves the story of a broken man who grieves by the beach every evening over the loss of a son who had drowned. On one of these fateful nights, he hears the sound of a beautiful naked woman singing..hmm..the plot thickens. She disappears into the ocean which causes the lovelorn seeker to return to the same spot until he finds the visitor again, which he very soon does. But, this is not Splash, and she is absolutely no Darryl Hannah., and he will oon understand that his newfound love is a being far more evil..and pwerful than he could ever imagine. Discover that love is sometimes truly blind when the book by Leisure/Dorchester swims to shore on August 10th.

Not too many frights going on in the world of the small screen, but I do have some information for probably one of the most highly awaited horror series ever in the history of television, The Walking Dead. The yet to be released series has announced their cast of actors, which includes a major genre name. Michael Rooker of Henry-Portrait Of A Serial Killer, has been given the role of redneck, Merle Dix. His brother will be played by Norman Reedus(Boondock Saints, Blade 2). Other actors that have been named are Juan Pareja(The Mist)as Morales, Melissa McBride(The Mist)as Carol, and Andrew Rothenberg(True Blood) as Jim. The Walking Dead plans to bring the end when the series airs in October during AMC’S FrightFest.

Hunting far and wide for some seriously scary schwag? Well, I have exactly what your credit card carrying cadaver is looking for. The Horror Hall Of Fame are finally being represented in full detail when Mezco releases three portrayals of the classic creeps we love.

First up, TCM’s Leatherface is a 1/6 scale figure which captures all the gory details of the madman, all the way to the top of his masked face to the bottom of his dingy cowboy boots. The figure is also draped in a real blood spattered cloth apron, includes the well known mallet, and of course, the family jewel, the chainsaw of all horror chainsaws.

Next is Nightmare On Elm Street’s Freddy Krueger. The Master of Dreams is a 12 in. scale figure with nearly a dozen points of articulation. Freddy’s torso is also covered in a real cloth film accurate sweater, and if that wasn’t enough, the green and red garb lifts to reveal the souls of his victims trapped in his chest cavity. Oh man, how sweet..fresh meat!

Lastly, in my opinion, the Godfather of Slashers, Michael Myers. The figure is also a 12 in. scale figure as depicted in Rob Zombie’s visions of Halloween 2. The shape also features a film accurate outfit, including real cloth jacket with vest, and of course, the weapon of choice, the classic butcher knife. Collect your fears when these legends are released to haunt toyshelves from the Cinema Of Fear collection this September.

So, there you have it, more things to look forward to in the months ahead.

But, before I leave you to head back to the peace and quiet of the tomb, I want to quickly introduce you all to a very important friend of mine, a partner in grime who always gives you the goods to create palpitations, Michelle Moricola. Michelle, who is a full time mommy, and loving wife somehow breaks out of her hectic schedule to give you horror knowledge whenever she can, including film reviews, by writing on her personal website, Fright Skool. If you have not already friended her on Facebook, or checked out her true wisdom, be sure to just that..because believe me fiends, she does know what she is talking about. Once again, check her out on Frightskool.com.

So, F.C., until next time just remember Jack Burton’s ol’ motto, the only thing that can impale your dreams is your own negativity. Scare ya’ later!