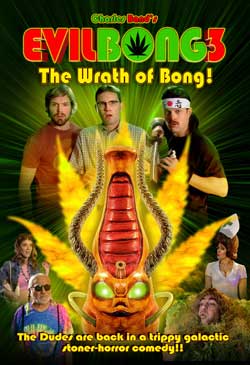 An evil alien bong crashes on earth. Its intent: world domination. Our stoner heroes are sent to the alien bong planet and held captive by nude alien beauties. Their only hope to escape and save planet earth: Eebee, the original Evil Bong.

With a title like Evil Bong, you pretty much know exactly what you’re going to get before pressing play. And by the third entry in the series – Evil Bong 3: The Wrath of Bong – it’s safe to assume that the folks at Full Moon Features aren’t going to mess with what appears to be a winning formula. In short, if you got high on the low budget brand of stoner comedy showcased in the prior entries, you’ll enjoy Evil Bong 3 just as much.

Following some trippy, kaleidoscope-like graphics of a meteor traveling through space, the film opens on a man (Irwin Keyes, House of 1000 Corpses) burying his wife, whom he appears to have just murdered. He is startled by a mysterious meteorite crashing onto earth. Upon investigation, a strange device that looks curiously like a bong pops out of it. Brandished with a skull and glowing green hoses, the cosmic device becomes lovingly referred to as the alien bong. (Humorously enough, a character later says it looks like a cheap movie prop.) 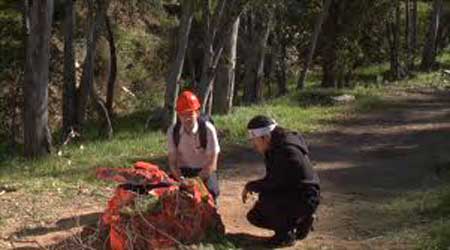 The man doesn’t think much of the incident, nor of the green fuzz that starts growing on him, and instead brings the bong to a local hemp shop to pawn it. The store is run by haphazard stoners Brett (Brian Lloyd) and Bachman (Mitch Eakins). Meanwhile, Larnell (John Patrick Jordan), now a consistory theorist and ninja in training, and Alistair (Peter Stickles), who works for the space institute, run into each other at the crash site. They also head to the hemp shop and, just like that, the old gang is back together. 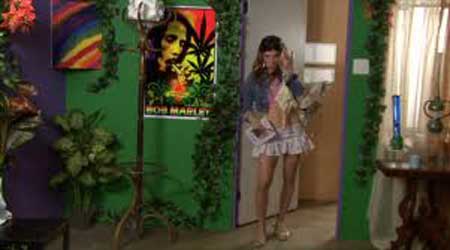 Upon buying the bong, Bachman can’t help himself; he has to try out the new merchandise before putting it on the shelf. After taking his first hit, he is brought to the alien bong’s world, which is inhabited by naked extraterrestrial chicks covered in fluorescent body paint, among various drug paraphernalia. One by one, the other characters join Bachman on the intergalactic journey. When there, they are drained of their seed (yeah, that seed) so that the aliens can create imitation humans to take over the world.

Three of the funniest characters from the previous installments return for a hit. Gramps (Jacob Witkin) is now a medicinal marijuana salesman with an assistant known as Nurse Hookah (Christina DeRosa), who pantomimes his every word. Rabbit (Sonny Carl Davis), on the other hand, is a priest that preaches the good word. Of course, Eebee (Michelle Mais) – the original Evil Bong – is back as well to help save the day. She is as crude as ever as she minces words with Alien Bong (Circus-Szalewski). 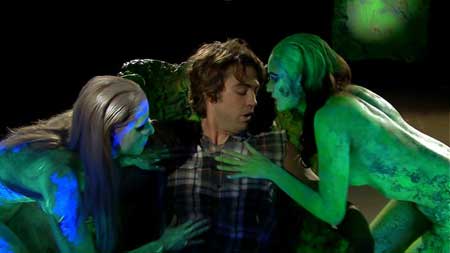 Two of the boys’ old objects of affection also make appearances. Luanna (Robin Sydney) happens into the shop but is largely unused, while Velicity (Amy Paffrath) makes a cameo at the end. It’s nice that all of the familiar faces returned to reprise their roles, but many of them were unnecessary and would not have been missed otherwise.

There must have been some kind of marijuana legalization rally in town during production, as there are a few shots of such an event in the picture. This adds a good deal of production value to the low budget effort. Otherwise, there are only a couple different locations and a consistent handful of characters. Charles Band’s (Puppet Master) direction is straight forward as always. 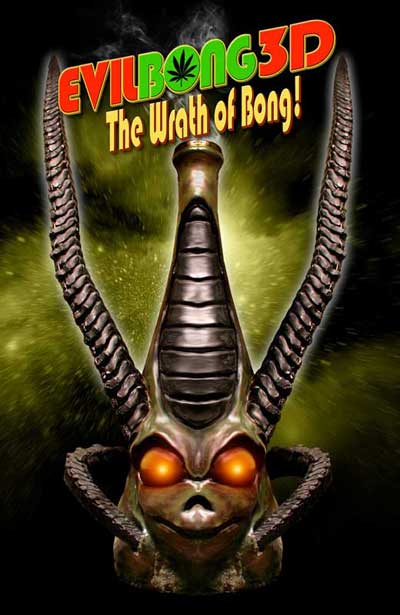 The film opened in a few theaters earlier this year equipped with 3D and “sniff-o-rama.” While this review copy was the standard, two-dimensional version, Full Moon is releasing an “ultimate stoner edition” complete with 3D glasses and scratch-and-stiff cards. If you have the choice, you may as well go for 3D version for another dimension of fun.

Fans of the Evil Bong series (yes, they exist!) will certainly enjoy the latest entry. It’s essentially more of the same, although I think this one trumps the previous sequel, Evil Bong 2: King Bong. Supporters can also rejoice that the film ends with a teaser for yet another adventure to add to your collection: Evil Bong vs. The Killa Crack Pipe. Evil Bong 3: The Wrath of Bong ought to get you stoned enough to tide you over until then.