The urban psychological-thriller Boy Wonder – already an underground cult hit that has garnered 13 awards and been critically acclaimed during a limited theatrical run and at film and pop culture festivals across the country – now debuts on VOD (Oct. 28) and DVD (Nov. 8) from Inception Media Group.

In this riveting and gritty film, a young boy witnesses the brutal murder of his mother during a Brooklyn car-jacking … leaving him to be raised by his alcoholic father (Bill Sage, HBO’s Boardwalk Empire, Handsome Harry, 2010 Best Picture-nominee Precious, American Psycho, If Lucy Fell). Now a 17-year-old loner, Sean Donovan (Caleb Steinmeyer, HBO’s True Blood, ABC’s Lost) is relentlessly haunted by his past and obsessed with finding his mother’s killer.

Drawn into a nocturnal urban underworld, Sean’s consuming rage is vented one night, defending himself from a chaotic attack by a drug dealer. Thus begins his life as a quiet, straight-A student by day and a self-appointed hero at night.

Investigating a series of vigilante murders, hot-shot new homicide detective Teresa Ames (Zulay Henao, Fighting, S. Darko, Feel the Noise) – broken by her own troubled life – takes an interest in Sean and his case. Yet the closer Teresa gets, the more suspicious she becomes. Engaged in a twisting game of cat and mouse, Sean and Teresa become allies by day … and enemies by night.

But what is a real hero? Who decides what is right or wrong? As the boundaries between justice and vengeance blur, Sean’s dual life wears on his psyche and his two worlds careen dangerously close to colliding.

Like a graphic novel you can’t put down, Boy Wonder challenges morality, distorting perceptions of what is right and what is justified, as it races to its shocking conclusion.

Boy Wonder, which marks the feature film debut of Morrissey, received accolades from critics during a limited theatrical release and won 13 awards at film festivals across the country, including:

Boy Wonder is presented in widescreen with an aspect ratio of 16 x 9 (2.40:1) and 5.1 Dolby Digital Surround Sound. Special features include “Making Of” Featurette. 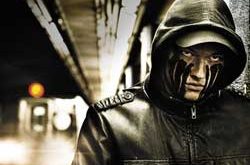