Survivors of a nuclear attack are grouped together for days in the basement of their apartment building, where fear and dwindling supplies wear away at their dynamic.

I’ve seen my share of apocalyptic films this year, not mention the various ones that arrived last year. I’m most surprisde on how they all take on different tones with the same basic philosophy….the end of the world. Or in some case, the “coming” of the end of the world. “Melancholia” and “4:44″ were a bit more on the gentle side of end times. While a number of others took to zombies, alien attacks, and cataclysmic earth events (aka 2012).

“The Divide” is unique in that it really accomplishes its claim to horror while proposing a situation that is entirely AND “most likely” possible. As “the Divide” begins, we witness the fiery end of the world as we know it. The few onlookers run for cover knowing full well that a radioactive mass of fiery chaos is only moments away. This rush of disbelief is captured perfectly in the eyes of lead Eva (Lauren German) who then runs for cover with a few others from an apartment complex. They “thought” they were the lucky ones….closing the metal door behind them as the “super” of the building gives them momentary sanctuary. 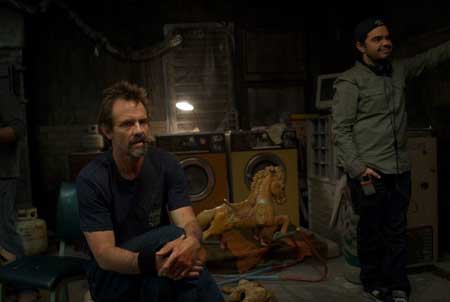 The real horror of “The Divide” is not in the chaotic mess outside that threatens all the chracters lives with sickness and destruction. You might even say that it’s not limited to the foreign militants who barge in with the intent to kill either. No, “The Divide” is about the horror of humanity and how a precious few leftovers of civilization quickly discard their sanity and compassion in the wake of knowing that death is knocking on their door.

Mickey (Michael Biehn), the super, provides sanctuary for these apartment residents and a few offerings of food as they all sit it out in the confines of a basement only protected by the metal basement door that separates them from the rest of the world. Mickey is clearly on edge, and very reluctant to house any of the survivors at the threat of using up his food supply. Though they all make due and try to pass the time while the radioactivity simmers down. 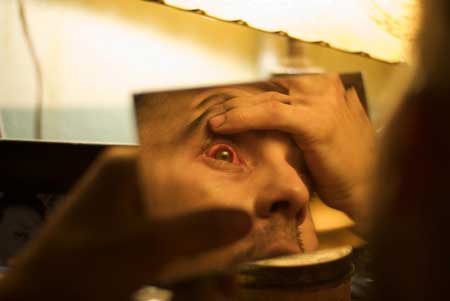 With isolation, comes a change in the perspective. The survivors grow hungry and frustrated with the accommodations they so quickly accepted. Mickey, starts on edge from the moment they arrive to well within the film. You would think that even with the amount of space this basement holds they would nut up and wait things out. However its clear that the food is running out and a few are showing signs of radioactive infection. 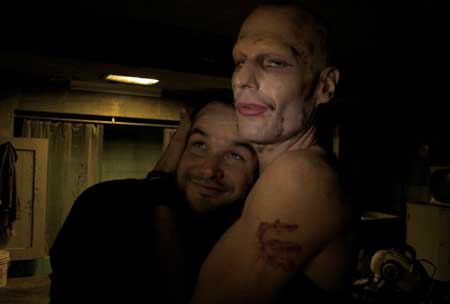 With a film like “The Divide” there is alot to cover and talk about. Rather it’s best experienced on your own terms, to really get the gist of people turning and the choices being made in combination “with” this turning. We never really get alot of the outer world in the film…but rather the coming undone of those waiting and struggling with survival. The film really goes into dark places, with sex, violence, insanity, and mental illness. The approach is not too unlike a few prison films I’ve seen that take on similar traits. 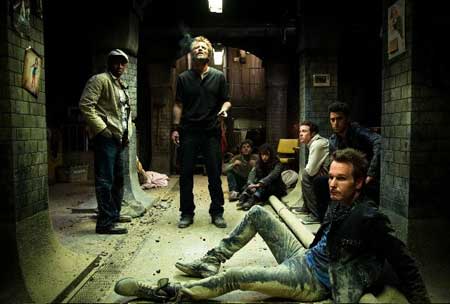 The whole cast in this case really deserves an award for a perfect union of acting roles. Lauren German as Eva, slightly reminds me of an earlier Milla Jovovich who quickly keeps it together and becomes self empowered. It’s the over the top roles of actor Milo Ventimiglia as Josh and Michael Eklund as Bobby that really take things to new levels. However Rosanna Arquette has the hardest role of all as the mentally and physically abused Marilyn. Let’s just say, she gets what she asks for. Michael Biehn as mentioned before, arrives tense and edgy never letting the reality of the situation to get away from him.

My only complaint here was that the Bluray I received didn’t contain any extras or behind the scenes. There is an obvious transformation in the actors who look like they had to endure hunger, and sleepless-ness to really perform the roles they set out to do. So it would have been great to hear the stories and process of how they all prepared and executed their roles. Milo Ventimiglia n particular looks like he took a few cues from Christian Bale in physical method acting. 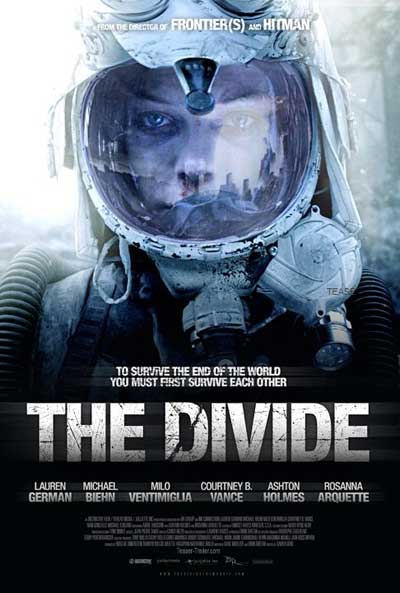 I’m calling “The Divide” without a doubt, one of the most horrifying film releases on 2012. Viewers should check this one out to get a glimpse of potential outcomes ahead. It’s horror seeps in, in a much different way that many films of its genre.

The Divide is now available on Bluray per Anchor Bay