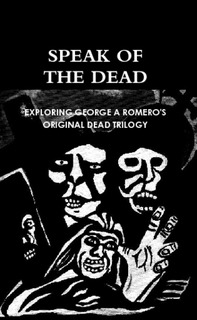 Have an insatiable appetite for flesh? Craving an epidermis entre? Find yourself beckoning Romero, Romero, where art thou Romero? Okay, perhaps that last one is only me but look no further zombie fans.

“Speak” is an intriguing glare into celebrating Romero’s visionary zombie flicks from Night of the Living Dead, Dawn of the Dead and Day of the Dead enough to rival the unblinking stare of any undead cadaver. Make no mistake about it, this is not a psychological thesis riddled with innuendo and subtext. Wade unapologetically proclaims his admiration for the genre with Romero’s first three undead classics in particular.

Even the undead can see it’s more of a tribute piece than an analysis which really is what we’re looking for. Skipping past all the pretentious profaganda that Romero’s much harsh critics so venomously sang, Wade’s exploration truly is an entertaining, insightful look into little known facts, a step behind the scenes and interviews with cast and crew members. Gruesome reflections are given from Judith O’Dea, Lori Cardille, Joe Pilanto and special effects maven Tom Savini.

Dawn of the Dead breaches a new horizon into subtext. Themes of media exploitation or examined. A smorgasboard of tales on the set including the challenges and tribulation of topping the 1968 predesescor in a shopping mall setting consumes this chapter.

Day of the Dead, the third installment in the trilogy is devoured by cannibalistic criticism. Returning to it’s brutality in fleshing eating grandiose, a proverbial gut splitting purge is made by the author in how this film pales in comparison to their monumental prequels.

Speak of the Dead concludes with a brief summary of projects Land of the Dead and Diary of The Dead, their far inferior installments.

In short Wade’s Speak of the Dead simmers slightly on the analytical scale. Yet the homage to Romero’s ground breaking genre never did profess to be anything but a discussion of sorts. Informative, entertaining and alluring; whether fans or newly discovering the undead, Speak of the Dead is an over all good blood curdling scream.