Undead Nightmare takes us back to around the same time of the original Red Dead Redemption. You find yourself back in control of John Marston at a time that seems to be a little bit before the original campaign ends. John, Abagail and Jack are getting ready for bed on a dark and stormy night when Uncle shows up late at their home. Uncle looks to be in pretty bad shape, and he attacks the family. A scuffle ensues, and Abagail and Jack end up being bit and turned zombie. John manages to kill Uncle before he does anymore damage, and John hogties his son and wife and leaves them to go find help. When John arrives in Blackwater, he discovers that there is some sort of highly-infectious outbreak that brings the undead back to life and makes people uncontrollably crave human flesh.. John manages to kill off a huge portion of the undead horde in Blackwater, but it doesn’t seem like he’s going to find a solution to the problem within the town, so he sets off to find the cause of the outbreak and a way to stop it.

During the single-player campaign in Undead Nightmare, you will travel to many different places you encountered in the original Red Dead Redemption campaign, only now you will have to save them from zombie attacks in order to stop, do missions, sleep, etc. You will encounter plenty of the characters from the original campaign as well. There are plenty of things to do in Undead Nightmare, and completing the whole campaign should take you a good 5-6 hours. 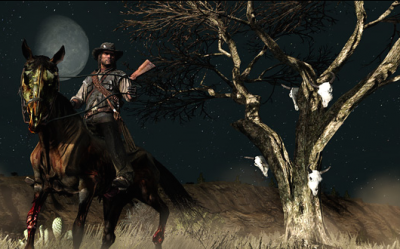 There are plenty of new additions to the single-player environment of Red Dead Redemption in Undead Nightmare though. For starters, you have to always be aware of your surroundings, because a zombie horde can come out of nowhere, drag you off your horse and quickly begin pummeling the life out of you. There are plenty of other supernatural creatures to encounter in Undead Nightmare as well, but I’ll let you discover those on your own. The world is now much darker and foggier, and that helps make the world really creepy. Undead Nightmare also has a nice soundtrack that is good for setting the tone of the game.

Undead Nightmare can be pretty tough for newbies, however you’ll have new horses and new weapons to help you fight off the undead hordes. There are the new four horses of the apocalypse: War, Famine, Pestilence and Death. Each horse has different looks and abilities, and War and Death are even useful in a fight. Undead Nightmare has plenty of new weapons that will help you out of a pinch. The Blunderbuss is a portable cannon that is useful for mowing down a whole horde in a single shot. Holy Water is like an undead destroying incendiary grenade; it will kill any zombie caught within the blast radius of its blue flames. One other new weapon is Boom Bait, and it attracts zombies to a specific location, and then it explodes and kills any zombies nearby.

Another couple of big additions you receive with Undead Nightmare are the two new multiplayer game modes. Undead Overrun is essentially Red Dead Redemption’s Horde/Zombie mode. You and some friends will try to survive as many waves of the undead as you can. The big twist with Undead Overrun is that one of you must reach a coffin and open it within a certain amount of time, your squad will be put in sudden-death and the game will end once everyone dies. Land Grab is a game mode where you try to control territories on the map without letting opposing players onto the territories. Both game modes are fun, but I’d pick Undead Overrun as my favorite of the two.

Undead Nightmare is an awesome addition to an already amazing game. You’re getting a lot of content for your money with Undead Nightmare. The single-player campaign is really fun, and Undead Nightmare pretty long for a downloadable campaign. The additions to multiplayer are really nice too. If you’re a fan of zombie video games or Red Dead Redemption, you owe it to yourself to go out and purchase Undead Nightmare.