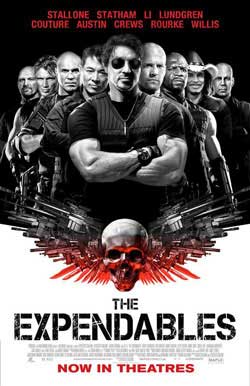 Barney Ross leads the “Expendables”, a band of highly skilled mercenaries including knife enthusiast Lee Christmas, martial arts expert Yin Yang, heavy weapons specialist Hale Caesar, demolitionist Toll Road and loose-cannon sniper Gunner Jensen. When the group is commissioned by the mysterious Mr. Church to assassinate the merciless dictator of a small South American island, Barney and Lee head to the remote locale to scout out their opposition. Once there, they meet with local rebel Sandra and discover the true nature of the conflict engulfing the city. When they escape the island and Sandra stays behind, Ross must choose to either walk away and save his own life – or attempt a suicidal rescue mission that might just save his soul.

Let’s face it, stunt casting is the reason everyone has their attention drawn to “The Expendables”, Sylvester Stallone’s ode to the action stars of past, present, and future. They are all here (most of them anyways) for one reason and one reason only: to kick each others’ ass and blow stuff up. The story is pretty paper thin, light on character development, but hits every beat on the action front and that’s where it counts. Anyone going to see this movie should know what is coming and what to expect like a high body count, blood, bullets, babes, lots of muscle, and of course the ridiculous one liners we find ourselves trying to place in our everyday lives. It’s like visiting old friends and it’s great to see them all at the same party.A group of mercenaries are hired to take down an evil dictator in a South American country. But nothing is ever how it seems, trusts are broken and lives are at stake. The Expendables are the best that money can buy and they will do their best to make sure the job is done or they will die trying.

Everyone that sees this film is a fan of someone, maybe everyone, that appears here. So those going to see Bruce Willis or Arnold Schwarzenegger will be sorely disappointed since the scene they appear in together was pretty unnecessary and obviously just an excuse to throw them together in a scene with Stallone. And you know what, who cares? It is pointless but I just sat there and smirked, it was a silly fun scene and for what it was it was cool to see.

I guess you can say the films main focus is on Barney Ross (Stallone) and Lee Christmas (Statham) and to a lesser degree Yin Yang (Li). As far as our core group goes, these are the guys who get the most screen time and we learn a bit about them.  The rest of the group, Toll Road (Randy Couture), Hale Caesar (Terry Crews), and Gunner Jensen (Dolph Lundgren) all have their moments to shine, especially Lundgren who  actually steals a couple of scenes from his co-stars and I hope this film is a stepping stone for him. Couture has charisma and likeable enough, though his acting could use some work. Terry Crews just plain needs a movie of his own. Lionsgate should give him a spinoff since he was under used here. That was bound to happen with so much talent on board. Mickey Rourke shows up as Tool, who seems to be like the father figure of the group. There is a great dialogue scene between him and Stallone that once again shows how underrated of an actor Rourke is.

Our villains are led by Eric Roberts, one of my favorites. He is just evil enough without going over the top. He has the money that pulls the strings of General Garza (David Zayas of “Dexter”) who is torn between the money and doing what is right. Roberts isn’t without his muscle, he has ‘Stone Cold’ Steve Austin on his side as his right hand man and has to great fight scenes, one with Stallone and another with Couture. Austin has his own sidekick in Gary Daniels (live action “Fist of the North Star”)who is, of all the people in the film, horribly underused. I have always thought he was the one of the top direct-to-video action stars that never got a fair shake. This is his first major theatrical release and I sincerely hope someone takes notice of his
talent.

Stallone follows in the footsteps of his last film and ramps up blood. Hell, the first kill in the film happens two minutes in and we see a shotgun blast tear a guy in half, graphic detail is shown and that is just the beginning. Plenty of gunplay, perfectly staged car chase, Li vs. Lundgren, Austin vs. Stallone, Austin vs. Couture, and Statham vs. all kinds of douche bags and shows why he has the throne of the modern action star. Rush out and see “The Expendables”. It’s one hell of a GREAT TIME!!! 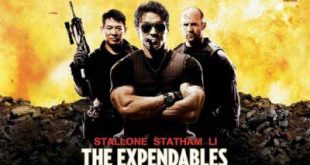