More Found Footage Films you say? Well we’ve got another one for ya here called “Tape 407“. This year has been shaping up with some of the best horror in found footage materials, so we’re hoping that a few more join the clan. We’ve also got a best of cinema verite list coming, though we still have a few new ones to view first.  It’s been a challengs when it seems like a new one is announced every week. My fav of the bunch so far “Grave Encounters”. In any case, here is some more info on Tape 407. 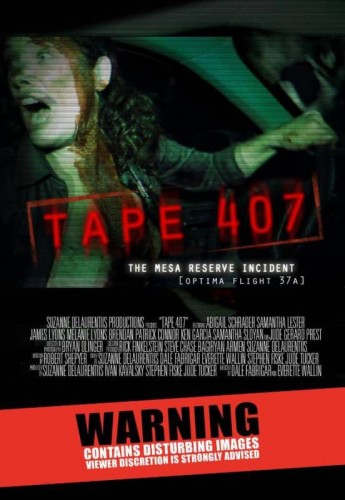 About Tape 407
“More terrifying than surviving a plane crash is what awaits them in the darkness.”

One of Hollywood’s most terrifying new films, Tape 407, features lost footage too real for reality and too disturbing for fiction. The film opens with two teenagers flying from New York to Los Angeles on New Years Eve. Their nightmare begins when their plane hits extreme turbulence mid-flight. The relentless weather attack causes panic and terror amongst the passengers until the plane ultimately crashes in a remote government-testing area.

The handful of survivors from the crash, bloody and disoriented, are then insistently pursued in the darkness by unknown predators that, unbeknownst to them, are part of the government’s top-secret Mesa Experiment. The film will take moviegoers on a whirlwind ride, with a twist ending that will leave you breathless, shocked, and terrified